Thoughts on Illustration from the Rockwell Center Society of Fellows

Thoughts on Illustration from the Rockwell Center Society of Fellows

Featured weekly in this month, a series of blog posts by Rockwell Center Society of Fellows scholars offer insights into illustration from vantage points meaningful within the diverse scope of their academic interests. 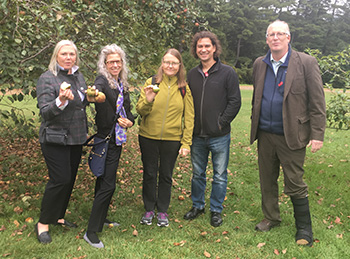 Making Meaning of Illustration, by Michele Bogart, Ph.D., offers another way of understanding illustration’s significance, by exploring affinities with American public sculpture as process and product. In Illustration Unbound, Christopher Lukasik, Ph.D., explores the story of how illustration developed over the course of the nineteenth century into an indispensable component of an emergent mass print culture. In Cultural Visibility, Erika Doss, Ph.D., examines the cultural position of illustration, and proposes distinctive features that define and classify it as a unique field or discipline. In Stick Figures: Drawing as Human Practice, D.B. Dowd invites engagement with mark-making as an essential tool for seeing and for learning, offering an expansive new vocabulary for description and analysis on a subject that has historically been narrowly and typically defined as the sole purview of the artist.

Illustration Across Media: 19th Century to Now, a symposium presented by the Rockwell Center for American Visual Studies at the Norman Rockwell Museum and the D.B. Dowd Modern Graphic History Library at Washington University in St. Louis, will convene in St. Louis from March 21 to 23, 2019. For information about submitting a presentation proposal, please contact jpurdy@nrm.org. This interdisciplinary conference brings together scholars from across the humanities and the arts to explore the history, context, and theory of illustration in the United States from the nineteenth century to now.  LEARN MORE >

To learn more about the Rockwell Center Society of Fellows:
https://www.rockwell-center.org/fellows/#current-fellows

Recently, I sat down with Senior Fellow and project leader, D.B. Dowd, to discuss the Rockwell Center for American Visual Studies, and the ways in which the canonical problems and cultural position of illustration can be established, with the goal of producing foundational statements for the field.

SHP: Why is the Rockwell Center for American Visual Studies, and the serious study of illustration, important?

DBD: During his lifetime, Norman Rockwell was a lightning rod for debate about "real" art, as opposed to fake art or easy art. Illustration was generally thought of "easy" art. People who loved Picasso and modern art were not big fans of Rockwell; his pictures struck them as sentimental. And generally speaking, those were decades (say, from the 1930s into the 1970s) in which people cared a lot about visual art, and debated it fiercely. People chose sides. Now that a lot of time has passed, Rockwell has come to be seen as an interesting artist by almost everybody, though not always for the same reasons. More generally, illustration―and particularly magazine illustration―has started to seem like an overlooked subject, partially because of the role it played in American society during the first half of the twentiety century. It was everywhere.

In light of all that, there's reason to look harder at Rockwell and his colleagues. The Rockwell Center was created to foster such scholarship, giving American illustration a disciplinary focus, while also placing it in the larger frame of cultural history.

SHP: What do you view as the goals of the Rockwell Center?

DBD: We want to learn more about individual illustrators and creators, but we also support research on the field itself. How illustrators, photographers, hand-letterers, art directors, and editors put out weekly and monthly magazines, and how illustrated periodicals engaged audiences; how advertising agencies, clients, and illustrators interacted to produce visions of "the good life" during the Depression, World War Two, and the postwar era; how the illustration studios like the Charles Cooper Studio organized labor, cultivated talent, and negotiated shifting markets. I could go on.

Despite increased engagement with illustrated images in recent years, the critical focus of most work has tended to be local, biographical and analytically underdeveloped. The leadership of the Rockwell Center, in consultation with other institutional and critical participants in these somewhat inchoate fields, recognizes a methodological vacuum at the heart of popular image studies. Ideological biases continue to compromise our understanding of visual culture in a social context, which results in an incomplete view of our shared cultural history. To address this critical lacuna, I worked with the Rockwell Center to envision a two-year project designed to bring leading thinkers and fresh perspectives to the study of published images, with the goal of producing a series of foundational statements of the emerging field, delivered via symposia, through publishing projects, and across digital media.

SHP: Why do you feel that this was necessary?

DBD: Illustration (and cartooning, its sister field) tends to be hidden in plain sight. We consume it all the time, but often without thinking about it. As a result, published images can have an extremely powerful effect on our understanding of people and places, but in unexamined ways. An obvious example of that would be ethnic caricature: representations of African Americans, or Irish immigrants at the turn of the century, or of the Japanese during World War Two. The general coarsening of our national dialogue provides an example of this phenomenon in terms of language. Because we are more alert to words and diction, we are more likely to notice a change there. Generally speaking, our cultural ecosystem is of great significance, and illustration has played a notable role in shaping it.

SHP: What do you feel we have accomplished so far, and what more is there to do?

DBD: The Rockwell Center has supported scholarships and fellowships through the years, but recently, we have upped the ante by creating the Society of Fellows in an effort to recruit leading scholars to work on illustration projects, to learn more about individual practitioners, and to explore the contours of the field itself through discourse on theoretical and methodological questions.  How might the subject be defined?

DBD: Art history is very invested in Art with a capital A. That might seem like the most obvious thing in the world to say, but let me explain what I mean by that. Human beings make lots of stuff: automobiles, sweaters, cheese graters, whatever. All of these things are designed to do things; they are useful. But Art with a capital A is different. Paintings and sculptures, for example, aren't expected to do anything. You put them on the wall or mount them in a plaza and there they sit. They don't work; they're like the aristocrats of human artifacts. This is a product of modern art theory, which is a bit over two hundred years old. (There's a bunch more to that, but that's another story.) Art history, which was invented around the same time, accepts this hierarchical system of objects. So paintings are Art, cars and sweaters are not.

For our purposes, this is where it gets interesting. Illustrations have some qualities that are art-like. They're attractive pictures, just like some paintings are. But in other respects, illustrations are more like cars and sweaters. They do work, by making a story clearer, or by showing the relationship between tadpoles and frogs (for example). And illustrations are always part of something else. They are grounded in reading, so you can't just put them up in isolation. From the perspective of traditional art history, illustrations simply are not art.

In a nutshell, that's the problem we are trying to fix. We want to encourage interesting, innovative folks from various disciplines (including art history!) to work with this material in fresh ways. And specifically, we want to foster work on methodological questions: new "hows" of studying illustration.

Stephanie Haboush Plunkett is the Deputy Director and Chief Curator of the Norman Rockwell Museum in Stockbridge, Massachusetts. The recipient of a Master of Fine Arts degree from the School of Visual Arts, Illustration as Visual Essay program, she is the author of two American Library Association Notable children’s books and the curator of many exhibitions exploring the art of Norman Rockwell and the field of illustration, including The Unknown Hopper: Edward Hopper as Illustrator; Ice Age to the Digital Age: The 3D Animation Art of Blue Sky Studios; Witness: The Art of Jerry Pinkney; William Steig: Love & Laughter; Ephemeral Beauty: Al Parker and the American Women's Magazine: 1940-1960; LitGraphic: The World of the Graphic Novel; Building Books: The Art of David Macaulay; and The Art of The New Yorker: Eighty Years in the Vanguard, among others. She began her professional career in the field of museum education, and has previously held positions at the Brooklyn Museum, the Brooklyn Children's Museum, and the Heckscher Museum of Art in Huntington, New York.