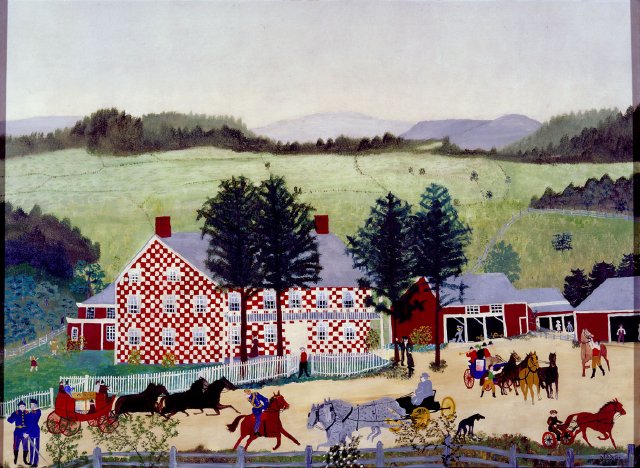 The Checkered House, painted with an eye-catching pattern of red and white checks, was a local landmark in Cambridge, New York, whose reputation lived on well after it burned down in 1907. In 1777 the building was used as headquarters for the British troops before the Battle of Bennington and as a hospital following the battle. In 1824, the Long family, who owned the house and operated it as an inn, entertained the famed Revolutionary figure General Lafayette. Moses also likely remembered that horse races were held on the turnpike which ran in front of the house. Over the course of her career Moses painted more than twenty versions of this subject, often amending dates to the end of the title. The Checkered House was repainted in 1853, but it is unlikely Moses knew this fact. Rather, her dates seem intended to suggest something that is "old-timey," as Moses might say, rather than recording any significant historic event. https://bennington.pastperfectonline.com/webobject/66CD31AA-F596-4951-A03C-142947736947