You never know what students will learn on a field trip.

A couple of years ago, students from the Edward A. Reynolds West Side High School, an alternative high school on West 102nd Street, went to the Norman Rockwell Museum in Stockbridge, Mass. The guides said that Rockwell’s birthplace was on West 103rd Street.

It was a who-knew moment. Who knew that the artist famous for folksy magazine covers of small-town life had grown up not only in the big city, but on the block just around the corner from their school?

Almost before you could say “Saturday Evening Post,” they were campaigning to rename the street where Rockwell had lived. The project became a real-life civics lesson, with forms the students had to fill out, signatures they had to collect and hearings they had to attend.

The payoff will come on Thursday. They plan to lead a parade from their school to West 103rd, where a street sign will be added designating the block between Broadway and Amsterdam Avenue as Norman Rockwell Place. It is just across Broadway from Humphrey Bogart Place, named in 2006 in honor of the star of movies like “Casablanca.” And at the other end of Norman Rockwell Place is a street sign honoring Odessa Steward, a longtime resident of the nearby Frederick Douglass Houses.

The students read up on Rockwell, learning that his birth certificate said he was born at 206 West 103rd Street in 1894. Museum officials said his family lived there until he was in his early 20s. He mentioned the neighborhood in his autobiography: “On summer evenings as the first cool breath of the sunset wind rustled in the dusty leaves of the two scrawny elms across the street,” he wrote, “my family used to walk to Amsterdam Avenue to catch the trolley for our evening airing.”

The students also learned that he enrolled in the New York School of the Arts when he was 14. He also attended the National Academy of Design and the Art Students League and was still a teenager when he was appointed art director of Boys’ Life magazine, published by the Boy Scouts of America.

“After going to the museum, there was this urgency from the kids — ‘we’ve got to do something, put a plaque up,’” recalled their teacher, René Mills. “I said, ‘We can look into different things we can do,’ and found out how to get a street sign and all the particulars the city government says you have to do. I wanted them to go through the process.”

Among other things, the students spent Election Day in 2014, a day off from school, collecting signatures on a petition. They showed images of one of Rockwell’s most famous paintings, “The Problem We All Live With,” along with images of a mosaic he created in 1961, “Do Unto Others.” They asked voters who came to their school, which doubled as a polling place, to sign.

The students explained who he was, what he did and where he had grown up. They got about 400 signatures.

The next step was to take their proposal to Community Board 7. “I’m not really a public speaking person,” said another student, Kailyn Santiago, 16, now a senior. “In my head I could have sworn I was choking up.” She said that when she watched video of her presentation, she looked fine, but there was a catch.

“They said this is not something they do often,” she recalled, referring to members of the community board.

But the board approved the proposal.

The next stop was the City Council’s Parks Committee. Fortunately for the students, the chairman of that committee, Councilman Mark Levine, represents the neighborhood.

“My first reaction was, Norman Rockwell’s from New York City?” he recalled, adding that the students had changed his perception of Rockwell.

“You really understand Rockwell’s work in a whole new way when you realize he grew up on the West Side,” Mr. Levine said. “He formed a view of the world that can be traced right back to 103rd Street. You’ve got to imagine he was struck by the great disparities of wealth in New York City even then, and that awareness stuck with him through his career. You can see it in subtle but important ways in so much of his work.”

The students went back to City Hall when the proposal came up for a City Council vote, and they returned in February, when Mayor Bill de Blasio signed legislation authorizing the designation.

The students are now working to raise money for a plaque they hope can be placed on the apartment building on the site of Rockwell’s brownstone. And, as children of the age of Photoshop, they remain awe-struck by his technique as an old-fashioned painter.

“The first time I went to the museum, I was like, this can’t be a painting,” said Azemina Cecunjanin, 20, who graduated last year. “I touched it. I was astonished.”

So was the museum guard, who came running. 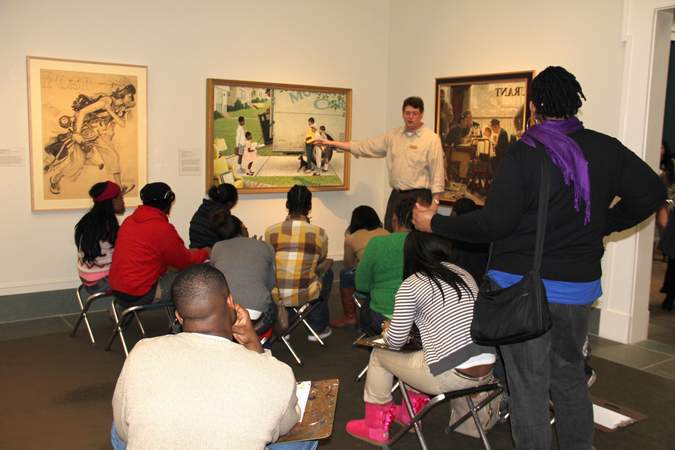