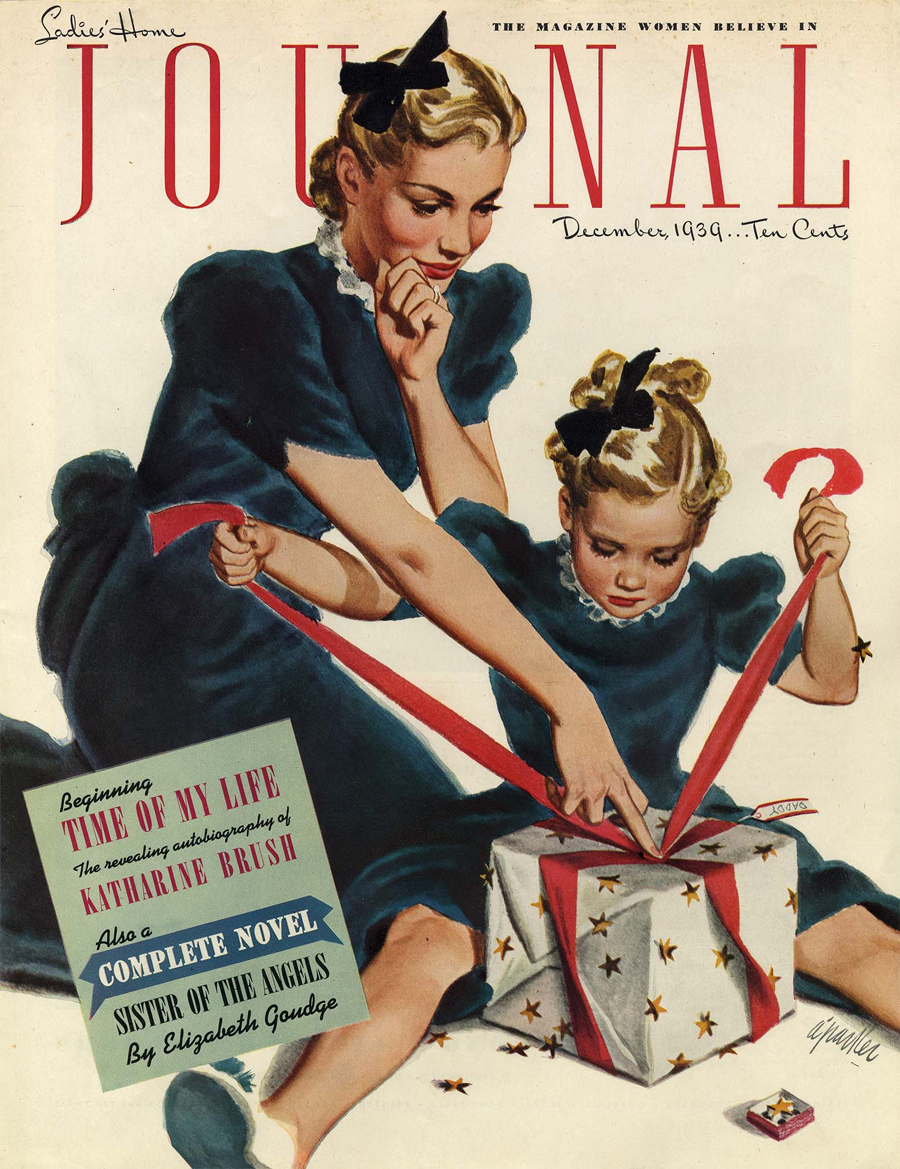 When the first of Al Parker’s famed mother and daughter covers for Ladies’ Home Journal was published in February 1939, his graceful silhouettes gliding across the ice in perfect unison and in matching outfits created a sensation. Over the course of the next thirteen years, Parker’s fair-haired cover girls celebrated holiday traditions and shared a love of sport but also played their part during World War II. Resourceful and good-natured, they modeled best behavior by rationing, sending letters abroad, and taking on dad’s chores at home and in the garden. America’s ideal family was reunited in July 1945 when Parker’s mother and daughter welcomed their returning soldier, a powerful image that inspired another narrative at the outset of the baby-boomer generation. By that December, two knitted booties—one pink and one blue—were already underway, and in 1946, a son was born.

“Al Parker’s famous Mother and Daughter covers grew out of the fact that Mrs. Gould and I used to skate on Sunday afternoon in Princeton at Baker’s Rink,” said Ladies’ Home Journal editor Bruce Gould in 1951. “Since neither of us skate very well, we had plenty of time to watch those who did. One thing particularly attracted our attention. Mothers who were very good skaters themselves . . . were teaching their little daughters and taking more pride in their daughters’ progress than in their own undisputed prowess. This spectacle of the proud mother and aspiring daughter seemed to us to have cover possibilities.”

Gould and his wife, Beatrice Blackmar Gould, who was also a Ladies’ Home Journal editor, communicated their concept to Parker, who began experiments on the theme. After several tries, he eliminated distracting backgrounds in favor of a clean poster design that emphasized strong, simple forms and recognizable narratives. The artist’s last mother and daughter cover was published in May 1952. His portrayal of an officer’s joyful return to his still-beautiful wife and growing family during the Korean War conflict brought an era of the artist’s career, and the magazine’s history, to a close. Ladies’ Home Journal’s covers were solely photographic after that, completing the transition away from traditional narrative illustration that had begun in the latter part of the previous decade. Photography captured the moment for many publications that were striving to remain current, relegating the art of illustration to a more decorative or conceptual function.