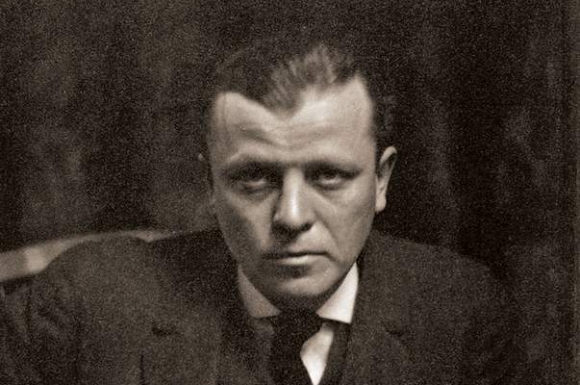 Arthur Garfield Dove (1880-1946) is hailed as the “first American abstract painter.” Originally from Canandaigua, New York, he attended Hobart and William Smith College and then Cornell University, graduating from the latter in 1903. Although his parents had hope that he would pick a lucrative field and put his Ivy League education to good use, Dove pursued art instead. He was poor for most of his life because of it.

Like so many, Dove became an illustrator after moving to New York City in 1903 and luckily had no trouble finding work. He completed many submissions for Harper's, Scribner's, Century, and American Magazine.

In 1907, Dove went to Paris. It was there that he became acquainted with modern art through his friend and American modernist painter, Alfred Henry Maurer (1868-1932). Upon his return to the United States, Dove found himself underwhelmed by his work in the commercial sector. Out of financial need, he was tied to magazine illustration commissions for the bulk of his earnings, but despite this he quit his job in commercial illustration and moved out to a farm in the upstate where he was able devote his time to painting in a developing modernist, abstracted style which he preferred.[1]

Dove’s early experimental work was influenced by the fauvist painter, Henri Matisse (1869-1954). Dove called his process “extraction”—the use of fundamental shapes found in nature to result in simplified forms on a canvas. He pioneered these colorful and dynamic forms in the United States, and fellow artists soon joined him in the approach. On numerous occasions Georgia O’Keeffe (1887-1986) credited Arthur Dove with inspiring her beginnings in art.

Dove worked in oils, pastels, and watercolors, and his paintings often focused on nature, transience, and light.[2] Collector Duncan Phillips (1886–1966) noted of the artist that “the forms in nature were to be his dictionary.”[3] As Dove’s style progressed, it became increasingly simplified in its forms and brighter in color.

Mechanical themes were also an important inspiration for Dove’s work. He often drew upon the shapes of gears, barges, sewing machines, cars, tugboats, and motor parts.[4]

Beginning in 1910, Dove’s work was exhibited at Alfred Stieglitz’s (1864-1946) various galleries: 291, Intimate Gallery, and An American Place. Through this representation, he caught the attention of Duncan Phillips, founder of the Phillips Collection in Washington, DC, who henceforth became a prominent lifelong patron of Dove’s, and served as a significant lifeline for the struggling artist. Phillips supported him through a generous annual stipend and his first solo exhibition in 1937.[5]

The abstract art that Dove created was ahead of its time, and therefore served to the artist's detriment. With the exception of a few vocal advocates like O’Keeffe and Phillips, abstract art did not have a supportive audience in the United States until after it became popular in Europe. Like many artists, Dove was not given his due until after his death.

Dove’s work now resides in many of the world’s most reputable art museums, including the Museum of Modern Art and the Phillips Memorial Gallery, and his work is also widely sought for private consumption. The Heckscher Museum of Art has preserved Arthur Dove and Helen Torr’s home in Huntington, New York, on the banks of Titus Mill Pond in Centerport, a historically protected site that will be open to visitors upon the completion of its restoration. Furthermore, there is a vast collection of their diaries, correspondence, accounting ledgers, bibliographic narratives, and clippings in the Smithsonian’s Archives of American Art, in Washington, DC, with much of the collection available digitally online.