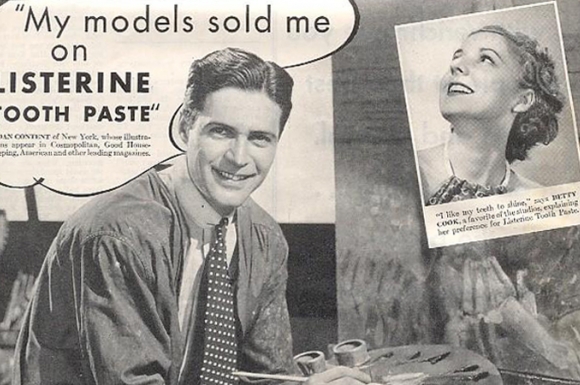 Dan Content (1902-1990) was an American illustrator who produced many magazine illustrations and commercial advertisements.  He studied under oil painter and muralist Dean Cornwell (1892-1960) at Pratt Institute in Brooklyn, NY, and then like many others, went to the Arts Students League where one of his teachers was the prolific Golden Age illustrator, Harvey Dunn (1884-1952).

Content was a freelance artist for most of his career, and his first published illustration was in 1923 for McCall’s.  From there he went on to publish for the highly circulated Cosmopolitan, Good Housekeeping, Liberty, The Ladies’ Home Journal, Collier’s, Reader’s Digest, and Woman’s Home Companion magazines.  For many of these years, Content shared a studio with his fellow artist friend, Mead Schaeffer (1898-1980).

Content’s early style is most reminiscent of his teacher Dean Cornwell, who employed sketchy execution to create dynamic scenes or moments in flux.  Independently, Content expanded his repertoire from the western theme passed down to him by Cornwell, and painted exotic foreign lands and adventure scenes.  These paintings define the largest portion of Content’s oeuvre.  By the 1970s, Content began to experiment with his style, switching to abstract compositions and eventually, to modern sculpture.

Teaching was a large part of Content’s career—perhaps something imparted to him by his prolific teacher, Dean Cornwell, who was lovingly referred to as the “Dean of Illustrators.”  Content taught at Work Shop School of Art from 1947-1948, and then became the art director for Benton & Bowles, a New York City-based advertising agency that was founded in 1929.[1]  After leaving Benton & Bowles, Content’s professional artistic pursuits become unclear, but it is certain that he stopped creating commercial illustration art by this time.

A collection of Dan Content’s work can be found in the Society of Illustrators’ Museum of American Illustration in New York City.[2]