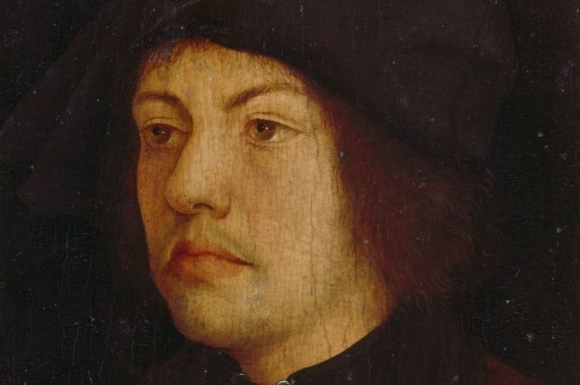 Considered the greatest engraver preceding Albrecht Dürer, Martin Schongauer (1445/1450-1491) was also the first identifiable maker of fine prints. Little information exists about Schongauer’s life and the chronology of his works.

Schongauer was born between 1445 and 1450 in Colmar (in present-day France), an Imperial city in the Alsace region of the Holy Roman Empire. As the son of a goldsmith, he likely learned engraving as an apprentice to his father. Around 1462, he worked near Ulm, Germany and in 1466 enrolled at The University of Leipzig for a semester, possibly to study or work on a commission. Schongauer likely travelled to the Netherlands, returning home to Colmar in 1469. Albrecht Dürer, having received three of  Schongauer’s early drawings from Schongauer’s brothers, marked them with the year 1469. If accurately dated by Dürer, these would be Schongauer’s first recorded works.[1] Influenced by Netherlandish 15th century painters, namely Roger von der Weyden, Schongauer integrated Netherlandish artistic advancements into German art.[2]

Schongauer was an avid painter sought after for his panels (few of which exist today). In 1473, Schongauer painted Madonna in the Rose Garden for the church of St. Martin in Colmar. The life-size Madonna appears both monumental and intimate as Mary humbly bows her head while two angels carrying a golden crown float above. Schongauer derived inspiration from the figure style of the Netherlandish school, particularly the works of Dieric Bouts. Reflecting the same precision he would uphold in engraving, he carefully rendered plants, such as the trellis of rose vines, and birds in a delicate and naturalistic manner.[3] In other paintings, such as Nativity and Holy Family, Schongauer parallels his mature engraving style from the late 1470s.

Schongauer, however, received significantly greater attention for his work in printmaking. Having produced 116 prints with his monogram (“M†S”), his earlier works, dated from about 1465 to 1475, distinctively bear a monogram with an “M” that has vertical lines, while the monograms appearing on his later works, dated from 1475 to his death, have flared lines.[4]

Schongauer’s late Gothic engraving style resembles a link between early German engravers such as one known as Master E.S., and later Renaissance-inspired engravers like Albrecht Dürer. Unlike contemporary engravers, who worked in the goldsmithing profession, Schongauer, an experienced painter, sought to introduce technically superior, more detailed and more realistic prints that would capture the same beauty as paintings. He also strived to portray religious figures with solemnity and magnificence. Indeed, as stated by one twentieth-century critic, Schongauer’s “angels and Virgins are striking in their supreme nobility, and it is hard to imagine more dignity and fineness than in his conception of Christ,” a type that reappears in the works of Dürer and Raphael, among other later artists.[5]

In one of his earliest engravings, The Virgin and Child with a Parrot,  Schongauer imitated a style by Dieric Bouts, and depicted Mary in half-length cradling Christ as an infant. Christ holds a parrot, which may represent the soul and eternal life. Schongauer outlined the figures’ forms with darker “modeling-lines” to reveal their shapes and indicate depth, while also simulating effects of reflected light and shadow.  In Death of the Virgin, Schongauer used three-dimensional perspective with light and shadow contrasts to express the dramatic scene of Mary’s passing, while incorporating modeling lines to emphasize depth and shapes. Schongauer conceptualized grotesque zoomorphic demons that torment a levitating St. Anthony in Temptation of St. Anthony. As a boy, Michelangelo reproduced this widely-distributed print in his first painting, .

When his style matured, Schongauer produced sets of themed prints. He made ten prints of figures, leaving the backgrounds empty, for The Wise and Foolish Virgins. His twelve-plate set, The Passion of Christ, became widely copied throughout Europe. Another later work, Christ Carrying the Cross, with its visual grouping, landscape, and characterization of over thirty figures, is called “the masterpiece of engraving.”[6] In this period, Schongauer also produced two prints of Archangel Gabriel and Mary for the Annunciation. The figures, slightly abstract in form, emit a metallic brilliance with subtle tonal values. Single-figured prints of St. Sebastian and the Madonna in the Courtyard also resemble his mature style.

In 1932, archaeologists uncovered Schongauer’s unfinished Last Judgement frescoes inside St. Stephen’s Cathedral in Breisach, Germany. Schongauer likely moved to Breisach in 1488 to work on the Last Judgement until his untimely death in 1491. In 1492, a young Albrecht Dürer travelled to Colmar hoping to meet Schongauer at his workshop, but unfortunately arrived just after Schongauer’s death.

The portrait of Martin Schongauer is attributed to Hans Burgkmair the Elder (1473–1531).