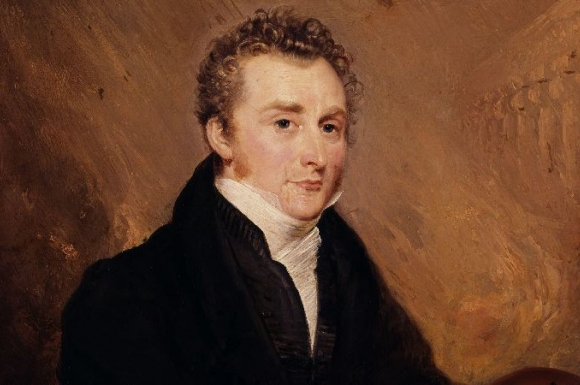 Given his bold and eccentric styles and departure from contemporary art norms, John Martin (1789-1854) was commonly at odds with art academics.[1] However, today, Martin is regarded as a main player in England’s Romantic movement, which focused on portraying the human relationship within the natural world. Most notably, Martin’s artworks masterfully portray the sublime, whereas his numerous apocalyptic scenes could evoke emotions of terror and unsettledness.

John Martin was born in 1789 in Haydon Bridge, England, to a poor family living in a one-room cottage. At age fourteen, he studied heraldic painting as a coachbuilder’s apprentice; the following year he began studying under a local Italian artist named Boniface Musso.

In 1806, at age seventeen, Martin accompanied Musso and his son to help establish a china painting business in London. When the business went bankrupt three years later, Martin found employment with a glassmaking company, William Collins, and worked there from 1809 to 1812. While working as a glassmaker, Martin completed his first oil painting, A Landscape Composition, which hung in the Royal Academy of Arts in London in 1811.

After leaving the glassmaking business, Martin sought to work independently as a painter. In 1812, he drew inspiration from a Persian-themed story to paint Sadak in Search of the Water of Oblivion, which depicts an exhausted man climbing into a formidable rocky terrain. Despite not initially selling at the Royal Academy, Martin’s Sadak painting received much praise from the public and eventually sold to a wealthy couple. Following this success, Martin painted scenes from the Bible and classical mythology, while also painting some landscapes of London and Southern England. During this time, Martin focused on vast landscapes, emphasizing natural elements with little architecture.[2]

As his popularity grew, Martin became known for depicting the insignificance of humans in relation to immense landscapes and forces of nature.[3] In 1816, the public admired Martin’s Joshua Commanding the Sun to Stand Still upon Gibeon, which depicted a Biblical scene zoomed out to invoke a dramatic natural setting with rays of light shining through clouds.

Martin also began to experiment with architectural perspective in his 1819 apocalyptic painting, The Fall of Babylon, depicting humans in panic as a storm looms over an ancient city. Martin also used architectural perspective in painting Belshazzar’s Feast, depicting massive colonnades encompassing a lavish banquet square with the Hanging Gardens and Tower of Babel appearing in the distance. Dwarfed by the surrounding architecture, Daniel prophesizes to Belshazzar in the foreground while crowds scurry behind in distress. Some critics speculate that Belshazzar’s Feast is a satire of George IV and his flaunted plans for “metropolitan improvement.” [4] In his 1828 painting, The Fall of Nineveh, Martin again exhibits his imagination for lavish architecture and extensive cityscapes, while also depicting the turbulence in its looming ruin.

In the late 1820s, Martin began producing mezzotint engravings of his paintings to sell to the public. To accomplish this, he assembled a printing room underneath his studio and hired professional printers to work under his supervision. The black and white engravings intensified dramatic light contrasts exhibited in his paintings. Not only did he profit from this project, but the greater distribution of his work brought Martin international popularity.

Between 1824 and 1825, Martin produced mezzotint engravings to serve as illustrations for John Milton’s poem, Paradise Lost. Using powerful light contrasts and detailed landscapes, Martin conveyed scenes such as the caverns of hell, Pandemonium (the capital of Hell), and Satan presiding at the Infernal Council. After receiving critical acclaim for these Paradise Lost illustrations, Martin solidified a reputation in engraving.

In the 1830s, Martin’s apocalyptic artwork waned in popularity. However, he continued to paint (mostly in watercolor) and even proposed water systems to the Royal Commission likely based on his paintings of Babylon. Although none of his architectural plans were executed, many locomotive bridges and railway stations were later inspired by Martin’s paintings.[5]

In 1838, as Martin faced potential bankruptcy, he returned to oil painting. In 1839, he painted The Coronation of Queen Victoria on a large canvas, incorporating the coronation’s noble attendees in the iconography. Many of the attendees purchased Martin’s unsold paintings when visiting his studio, alleviating Martin’s financial issues.  Martin’s last works before his death in 1854 comprise a trilogy of large oil paintings: The Plains of Heaven, The Great Day of His Wrath, and The Last Judgement. Showing both serene and terrifying elements of nature, the three apocalyptic paintings are considered among Martin’s greatest works.

Adams, Max. The Prometheans: John Martin and the Generation That Stole the Future. London: Quercus, 2010.