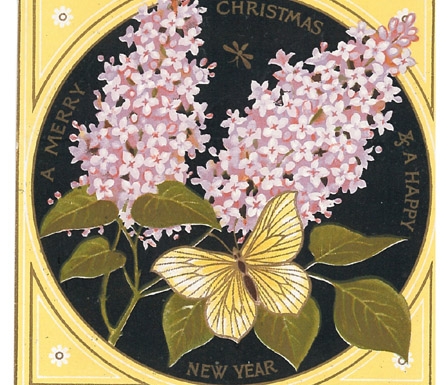 Thomas Crane was the eldest son of painter and miniaturist Thomas Crane (1808-1859) and his wife Marie Crane. As with his younger brother, Walter Crane, Thomas was influenced by his father’s craft and skill as a painter to pursue a career in the arts. Though he did not become as famous as his younger brother, Walter, the two Cranes did enter into similar career paths, with Thomas illustrating Christmas cards and children’s books, and designing needlework patterns.

Privately educated in Torquay, England, Thomas Crane was apprenticed to a lawyer and worked at the General Post Office before he decided to devote his time to a career in the arts. In the 1860 and 1870s Crane designed cloth book-bindings for James Burn & Co., a firm that also had connections to W.J. Linton, the engraver with whom his younger brother, Walter, apprenticed. After leaving James Burn & Co., Crane became the Director of Design at the London office of Marcus Ward & Co., where he supervised the design and sale of Christmas cards, a product which was becoming popular in 1880s Victorian England. Marcus Ward & Co. also designed books, and Thomas himself frequently worked on the illustrations for both their Christmas cards and children’s books. Victorian Christmas cards, including those by Marcus Ward & Co., were known for their quality and coveted by art collectors in addition to members of the general public looking for festive and sentimental greetings. Gleeson White, an art critic and first editor of The Studio: An Illustrated Magazine of Fine and Applied Art, commented on Crane’s design and supervision at Marcus Ward & Co. stating that Crane oversaw “a series of cards which—quite apart from the excellence of their pictures, or floral devices—were embellished by most refined and appropriate ornamentation on their borders and backs.”[1] During Thomas Crane’s tenure as Director of Design at Marcus Ward & Co, the firm also produced a number of acclaimed books by Walter Crane and Kate Greenaway.

During the 1880s, Thomas Crane, known for his ornamental designs and embellishments, produced a series of celebrated books with other contemporary illustrators such as his cousin, Ellen Elizabeth Houghton, and John George Sowerby. At Home (1881), Abroad (1882), and At Home Again (1883) were popular sellers and described by Roger Dixon in The Oxford History of the Irish Book as “among the loveliest books ever produced.”[2] In addition to his contribution to children’s books, Thomas was also among several artists chosen to create needlework patterns for the Royal School of Needlework. Among the other artists commissioned for this revival of artistic needlework and ornamental embroidery were William Morris, Edward Burne-Jones, and his brother, Walter Crane. Thomas collaborated on artwork with Walter on a number of occasions, and also with his sister, Lucy, in her publication Lectures on Art, and Formation of Taste from 1882. The book was published by Macmillan the year Lucy died “as a memorial of the author...who versified many of the nursery stories for Mr. Walter Crane’s picture books, arranged the music for ‘The Baby’s Opera,” and translated the ‘Hausmӓrchen’ of the brothers Grimm for the Crane edition.”[3]

In the later years of his life, Thomas began painting landscapes, which remained his primary focus until the end of his career. One of his landscape paintings hung in an exhibition at the Royal Academy in the early 1900s around the time of his death. Thomas Crane became afflicted by paralysis and died somewhat suddenly on May 27, 1903 at the age of fifty-nine.

White, Gleeson. Christmas Cards and their Chief Designers. London: Offices of “The Studio,” 1895.