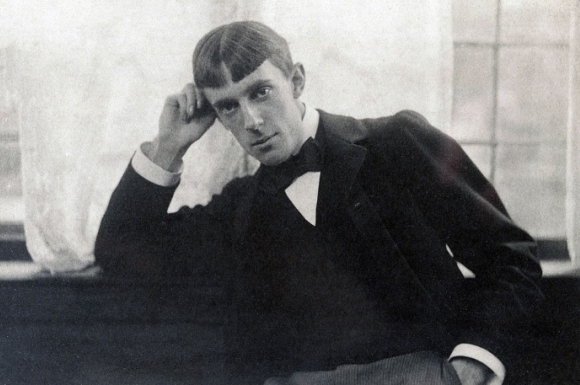 Born in Brighton, England on August 21, 1872, Aubrey Beardsley’s artistic talent was not innate from a young age. His father, Vincent Beardsley was from a wealthy family but eventually lost his standing in society and was forced to find employment. His mother, Ellen (Pitt) Beardsley also came from a well-to-do family, and was an accomplished pianist and painter of silhouettes. Before his penchant for drawing, Aubrey had a passion for music which followed him throughout his life. At age seven, he was diagnosed with tuberculosis and had to be sent away to a school in Sussex to regain his respiratory strength. In 1883, Vincent Beardsley accepted a position in London, where Aubrey and his sister, Mabel were encouraged to give piano recitals to earn extra money. A year later in 1884, financial difficulties forced Vincent and Ellen to send Aubrey and Mabel to live with their great-aunt Pitt in Brighton. Always close friends, Aubrey and Mabel spent a great deal of time walking to a church a mile from their great-aunt’s house to view the Pre-Raphaelite stained glass. This appears to be one of Aubrey’s first opportunities to view Pre-Raphaelite art, which would inspire him later on.

In 1885, Aubrey was sent to boarding school in Brighton, where Aubrey took great interest in his housemaster A.W. King’s extensive book collection. During his time at school, Aubrey developed a love of reading and eventually, drawing. His family moved to Pimlico, London in 1888, and Aubrey left school and joined them. Finding work at an insurance company the following year, Aubrey, like Arthur Rackham, would come home after work every night to draw in his free time. A family acquaintance, Father Alfred Gurney, was an art collector who invited Aubrey to view his collection of Renaissance artists and Pre-Raphaelite drawings. Gurney also gave Aubrey some of his first commissions and urged him to look to Renaissance artists for inspiration. He and Mabel also began visiting London art museums and private art collections where Aubrey was mesmerized by the paintings of the Pre-Raphaelite artists.

Inspired and motivated by these visits, one day in 1891, Aubrey and Mabel set off to view Edward Burne-Jones’ studio in Fulham. Aubrey was confident that they would be granted access to Burne-Jones’ art simply by ringing the doorbell, and he was right. After ringing the doorbell and being politely turned away by the servant who answered, they were stopped by Burne-Jones and invited in to view his art. Aubrey stated, “His kindness was wonderful as we were perfect strangers, he not even knowing our names.”[1] Arriving prepared with a portfolio of his drawings, Aubrey showed Burne-Jones a sampling of his work to which he received uncharacteristically high praise. “There is no doubt about your gift, one day you will most assuredly paint very great and beautiful pictures...All [these drawings] are full of thought, poetry and imagination. Nature has given you every gift which is necessary to become a great artist. I seldom or never advise anyone to take up art as a profession, but in your case I can do nothing else.”[2] Burne-Jones became a mentor to Aubrey and introduced him to additional Renaissance artists, such as Sandro Botticelli and Andrea Mantegna, who became persistent inspiration for him.

In 1892, a bookseller named Frederick Evans, recommended Aubrey to publisher J.M. Dent as an illustrator for his upcoming book. Evans and Aubrey had become close friends over the years as Aubrey frequented his bookshop in Queen Street, London. Dent was looking for an illustrator to create pieces for his upcoming Le Morte d’Arthur and wanted to “find an illustrator imaginative and capable enough to carry out the very large number of designs that would be required.”[3] After submitting a specimen illustration of The Achieving of the Sangreal to Dent, Aubrey was hired. In the beginning of the project, Aubrey was enthusiastic and created drawing after drawing, however that enthusiasm soon waned as the extensive project continued, and his illustrations began to deviate from the story. Overall, it is calculated that Aubrey drew about 362 designs for Le Morte d’Arthur, some of them now considered among his best work. When Aubrey first began working on the illustrations, he tended to create figures reminiscent of Burne-Jones’s artwork, however as time went on, his interest in Japanese woodblock prints began to show through. This combination of influences created an interesting amalgamation of Medievalism and Japonisme, as can be seen in How Sir Tristram drank of the Love Drink (1893).

In the middle of 1893, Le Morte d’Arthur and Bon Mots (another commission from Dent) were both published, making Aubrey the most famous young artist in England. The “Beardsley Boom” of April 1893 began when Aubrey was featured in the keynote article of The Studio, an art publication in London, titled “A New Illustrator: Aubrey Beardsley.” Within this article was also a drawing from “The Climax” of Oscar Wilde’s Salomé entitled J’ai baisé ta bouche, Iokanaan. When planning their English translation of the play from its original French, Wilde and his publisher, John Lane, already thought of Aubrey for the job because “he had grasped the essential nature of what was required.”[4] The often grotesque drawings created for Wilde’s Salomé combined many different stylistic influences from Beardsley’s short career, a tendency which could already be detected by looking at his later illustrations for Le Morte D’arthur. Elements of the Pre-Raphaelites, Japonisme, and the beginnings of Art Nouveau can be viewed in what are considered some of the best work of his short, yet prolific career.

Reaching success at age twenty, Beardsley’s artistic career fits into a tragically short span of only six years. The events of this time seem to happen in quick succession, at the same rapid speed as his drawing style morphs from Medieval Revival, to Japonisme, to the beginnings of Art Nouveau. After his illustrations for Salomé, Beardsley was closely tied to Oscar Wilde in the public’s mind, which was severely to his detriment when Wilde was arrested for sexual indecency. Though Beardsley had no immediate connections to the events and accusations that were heaped upon Wilde, accusations stated that Wilde had been carrying a book with a yellow cover, which was wrongfully attributed to be Beardsley’s magazine, The Yellow Book. After these unfortunate events, Beardsley’s career at The Yellow Book was tarnished beyond repair. He was fired from the magazine and joined forces with Leonard Smithers, a London publisher, and fellow contributor to The Yellow Book, Arthur Symons to create a rival periodical, The Savoy, of which Beardsley became the art editor.

In December 1896, Beardsley suffered a violent hemorrhage while walking with his mother at Boscombe. Afterwards, he moved to the nearby town of Bournemouth to dwell in the mild climate. On March 31, 1897 Beardsley chose to be received by the Catholic Church before his death, and as repentance for what he felt were his sins, he wrote to Leonard Smithers imploring him to destroy all copies of Lysistrata in addition to any other obscene drawings. Smithers ignored Beardsley’s request.

During the last year of his life, Aubrey Beardsley moved to the French Riviera where he died on March 16, 1898. After his death, Oscar Wilde wrote to Leonard Smithers about Beardsley’s short life, “There were great possibilities in the cavern of his soul, and there is something macabre and tragic in the fact that one who added another terror to life should have died at the age of a flower.”[5]

Nielson, Claire. The Spirit of Beardsley: A Celebration of His Art and Style. New York: Gramercy Books, 1998.