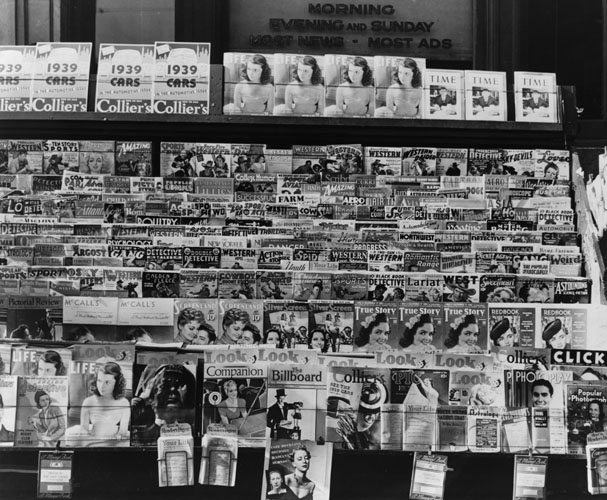 Pulp magazines, the popular, inexpensive fiction publications that were read and enjoyed by millions, reached their zenith in the 1930s, though the genre began in earnest in 1896 with The Argosy, a monthly magazine that was printed on low-cost pulp paper.  Not a solely American institution, pulp magazines were preceded by the weekly issues of “penny dreadfuls” that were popular in England from the 1830s to the 1890s, so named because of the low price and subject matter of crime and horror. 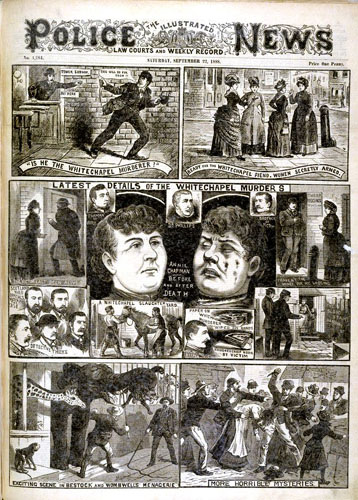 Fig. 2. This edition of The Illustrated Police News from September 22, 1888 sensationalized the exploits of Jack the Ripper. 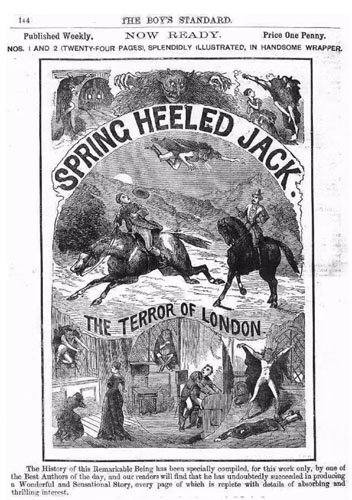 Fig. 3. Spring Heeled Jack was a popular legend serialized in British magazines of the mid to late-19th Century.

Industrialization and improvements in printing allowed the increasingly literate working class affordable reading material.  Part of the popularity of the penny dreadfuls can be attributed to the affordability of the magazines.  Because they were printed on cheap pulp paper, they were much less expensive than the high quality, serialized novels of authors like Sir Arthur Conan Doyle and Charles Dickens.

Similar in style to the penny dreadfuls, dime novels became popular in America beginning in the 1860s. The pocket-sized paperback books included reprints of previously published stories in a small format.  Eventually, the dime novels featured more newly-authored pieces as sales of the publications grew. The first pulp magazine, The Argosy, was published in October 1896, though the magazine had been published as a children’s weekly since 1882.  The first monthly issue of The Argosy was printed on cheap wood pulp paper, was aimed at an adult audience, included purely fictional content, and only cost ten cents.  The margin of profit was large enough that the magazine could include much more content that similar periodicals.  According to historian Robert Sampson, the magazine’s circulation increased from 9,000 copies in 1894, to 80,000 following its format change in 1896 to nearly 500,000 in 1907 (Yesterday's Faces: Dangerous Horizons, p.11). 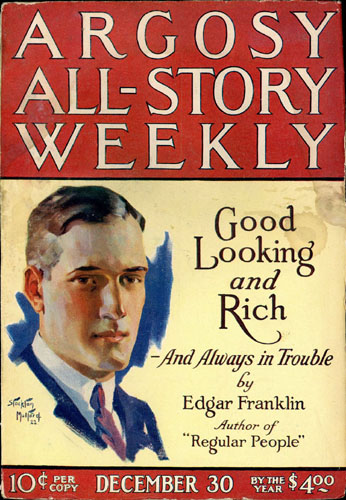 Other publishers took note of The Argosy’s success, and additional pulp magazines soon appeared on newsstands.  The Popular Magazine debuted in 1903 and often featuring cover art by famed illustrator N.C. Wyeth.  The All-Story Magazine and Blue Book launched in 1905.  Other notable pulp magazines being published were Adventure in 1910, Black Mask in 1920, Love Story in 1921, Weird Tales in 1923, and Amazing Stories in 1926.

Pulp magazines were so named because of the inexpensive paper the stories were printed on, in contrast to the more respectable “glossies” such as Collier’s, Life, and The Saturday Evening Post.  Presented on newsstands alongside scores of glossies, pulp magazines were able to catch the eye of passersby with their colorful, action-packed, scintillating, and often lurid cover art.  To make the pulp magazines more visible, the covers featured artwork by some of today’s most regarded illustrators, including J.C. Leyendecker, Dean Cornwell, N.C. Wyeth, Everett Raymond Kinstler, Tom Lovell, and Frank Schoonover. 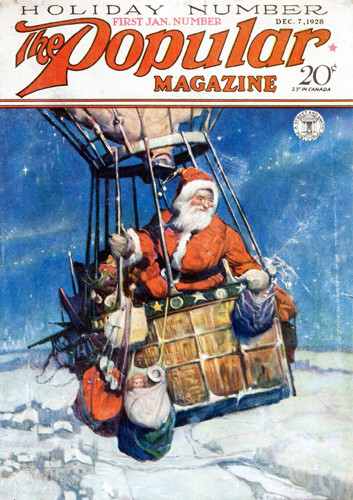 Fig. 5. Famed illustrator Frank Schoonover painted the cover of this issue of The Popular Magazine, Christmas 1928. 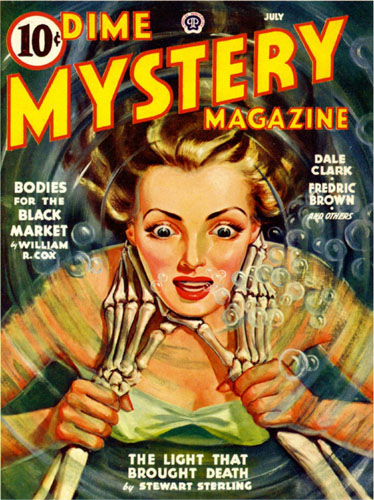 Founded in 1930, Popular Publications was among the largest publishers of pulp magazines, at one time releasing 42 titles per month, and claiming to have created 300 separate titles.  Stoll-Karn remembers, “In a field dominated by men, it was unusual for a woman to be painting covers for pulp magazines in the 1940s.  As a free-lance artist, I often traveled New York subways carrying wet canvases to Popular Publications.  Starting in my teens, ideas for romantic scenes came easily as the influence of Hollywood’s “boy meets girl” movies was significant.  It was also during the time of World War II when uniformed men provided a valiant and romantic presence.” 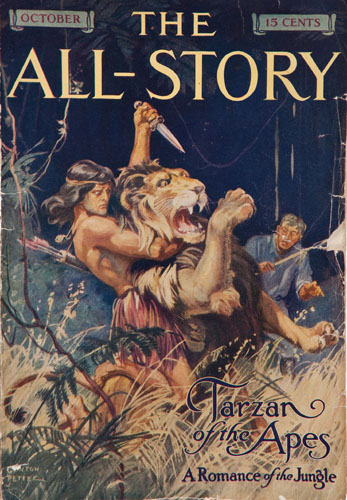 H.P. Lovecraft’s legendary Cthulhu monster mythos made its debut in the February 1928 issue of Weird Tales.  The character Zorro first appeared in All-Story Weekly in August 1919, and Conan the Barbarian debuted in Weird Tales, December 1932.

The popularity of pulp magazines crossed over to other media.  Hero adventures were easily translated to the Silver Screen in serials like Buck Rogers (1939) and Flash Gordon (1936), feature films Tarzan of the Apes (1918) and The Mark of Zorro (1920), and radio dramas like The Shadow (1937).  Pulp magazines have even made appearances in major motion pictures.  In the 1943 Alfred Hitchcock film Shadow of a Doubt, actor Hume Cronyn’s character obsesses over the exploits in such pulp magazines as Unsolved Crime Stories, Detective Stories, and Murder Mysteries, which helps lead to the capture of a killer on the loose.  Also, in Back to the Future (1985), the character George McFly is seen holding the Fall 1954 issue of Fantastic Story when his son, Marty, startles him awake to proclaim he is Darth Vader from the planet Vulcan. 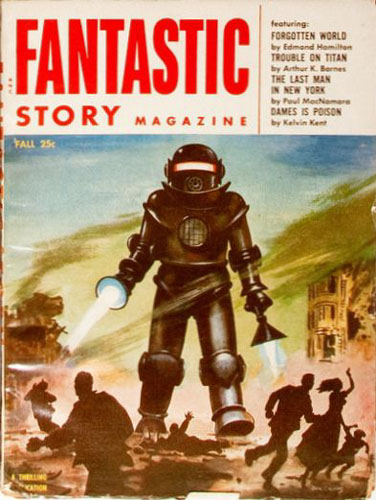 Although pulp magazines survived two World Wars and The Great Depression, they faced a steady decline in readership throughout the late 1940s and 1950s.  Paper drives during World War II limited the availability of stock for publication, superhero comics had captured the country’s attention with the debut of Superman in 1938, and readers began buying up new small mass-market paperback books branded as Pocket Books starting in 1939.  The explosion in popularity of television throughout the 1950s signaled the end for the few surviving pulp magazines.

Though some pulp magazines provided a mix of stories each month, many catered to certain themes, such as Adventure, Crime, Horror, Romance, Science-Fiction, Sex, Sports, War, and Western.

You could explore adventure on the sea, in the jungle, or in Asia with magazines such as Adventure, Blue Book, The Mysterious Wu Fang, Doc Savage, and Jungle Stories. 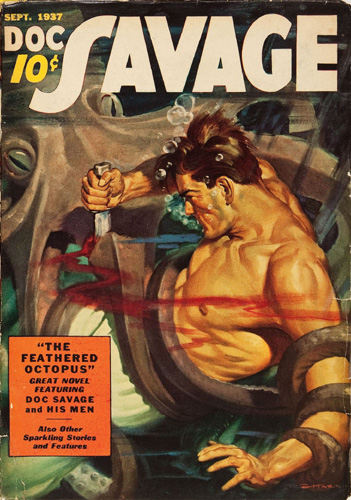 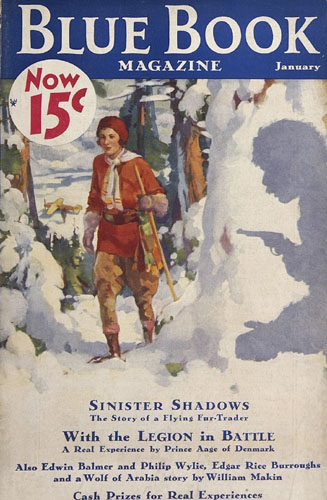 Fig. 10. A sinister shadow awaits a hiker in this issue of Blue Book Magazine, January 1933 (cover by Joseph Chenoweth). 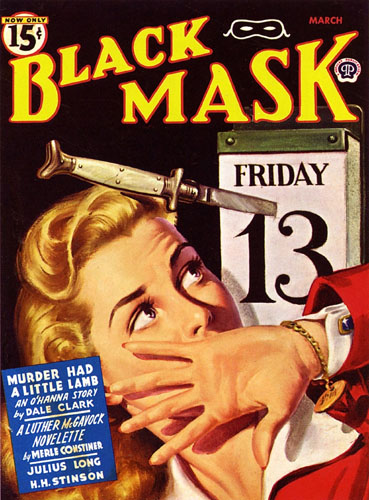 Fig. 11. An unlucky victim appears on the cover of this issue of Black Mask, March 1945 (cover by Gloria Stoll Karn). 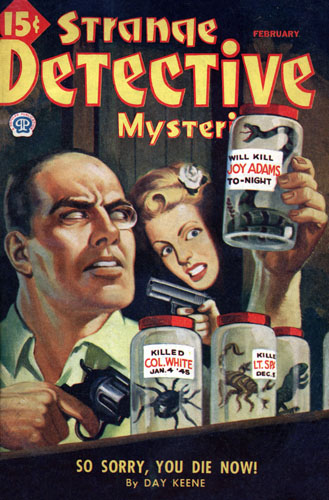 If horror was your interest, you could purchase Weird Tales, Terror Tales, Dime Mystery Magazine, and Horror Stories. 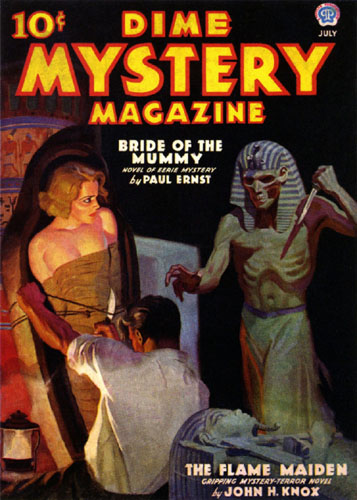 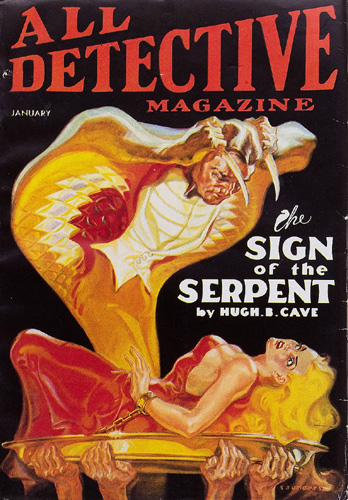 Science-Fiction (or Fantasy, as it was called then) could be found in books like Amazing Stories, Wonder Stories, Weird Tales, Captain Future, and Fantastic Adventures. (In Amazing Stories, No. 1, April 1926, editor Hugo Gernsback referred to the genre as “Scientifiction.” Forrest Ackerman, the creator of the Famous Monsters of Filmland magazine, coined the more popular term “Science Fiction” in 1954.) 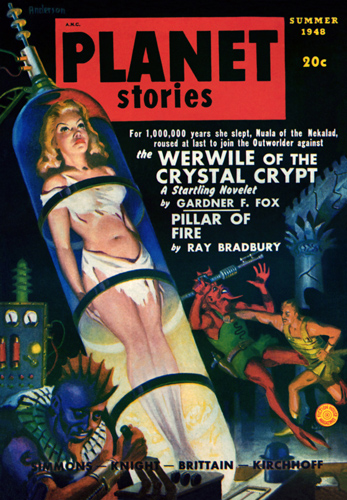 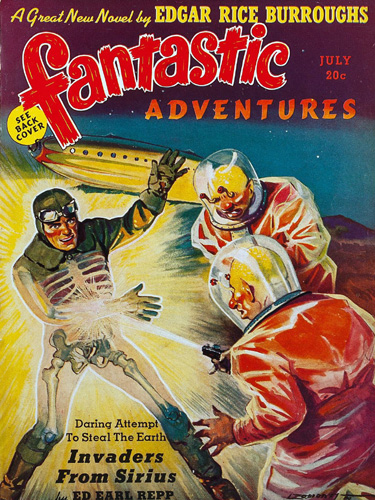 If feminine seduction was more your style, you could find it in the pages of Spicy Mystery Stories, Saucy, New York Nights, and Cupid’s Capers. 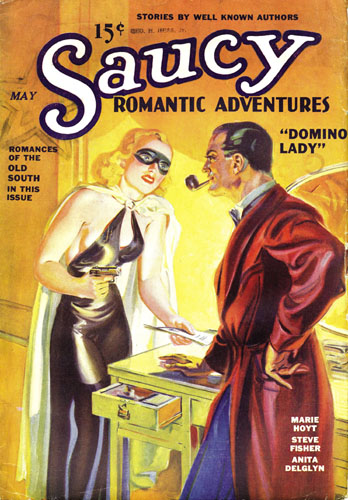 Fig. 19. A femme fatale brandishes a gun for this issue of Saucy, May 1936 (cover by Norman Saunders). 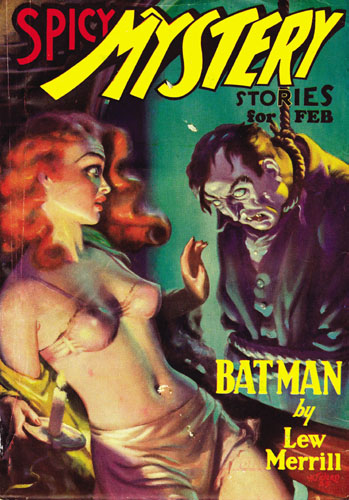 Sports stories were published under titles such as Fight Stories, Sport Story Magazine, and Baseball Stories. 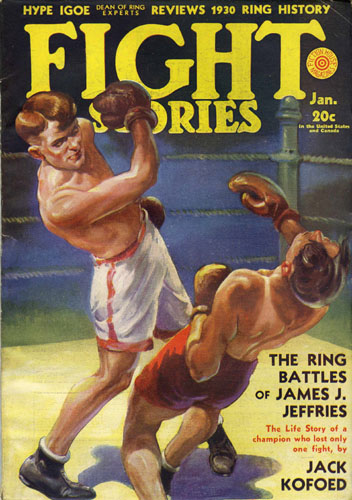 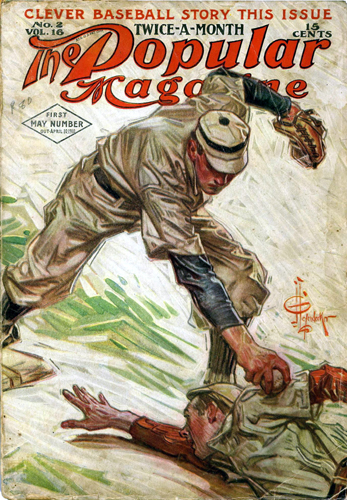 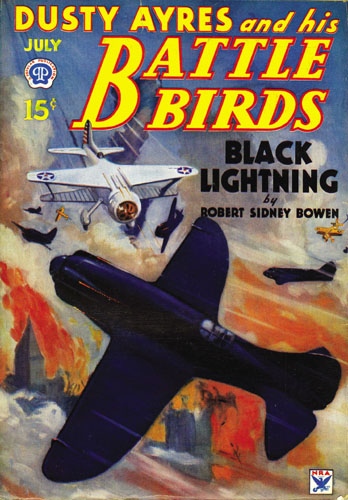 Fig. 23. War fiction had been popular since World War I when more than twenty-five percent of all American men age 18 to 31 were enlisted for military service.  This issue of Battle Birds, July 1934, details the use of aviation during war (cover by Frederick Blakeslee). 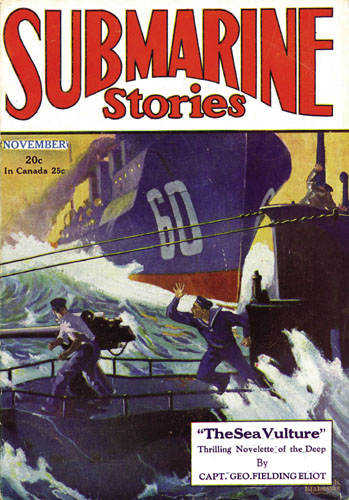 Stories of the Old West could be found in the pages of Western Story Magazine, Cowboy Stories, Dime Western Magazine, and Wild West Weekly. 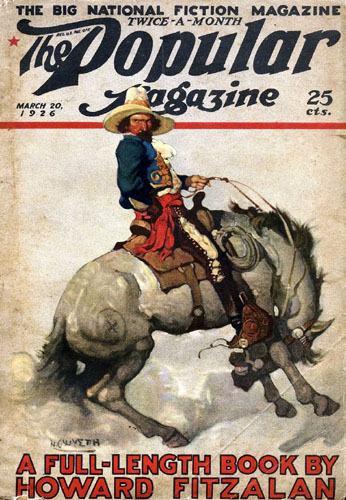