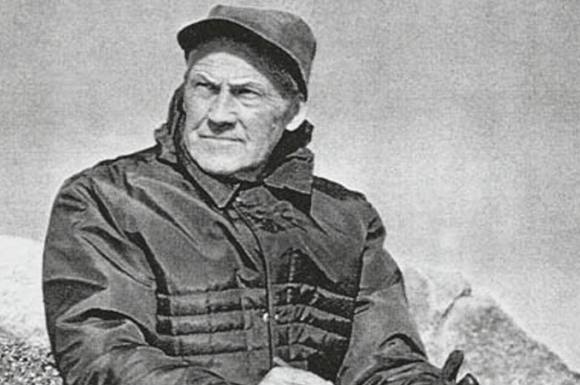 Tom Lovell (1909-1997) was an American illustrator, famous for his work in popular magazines as well as his images of the American West. Lovell was known for painstakingly researching his subjects for authenticity, yet never abandoning the dynamic action and human emotion used for his fictional illustrations. He considered himself a “storyteller with a brush, a custodian of the past.”[1]

Lovell was born in New York City, February 5, 1909, to Henry S. Lovell Jr (a telephone engineer) and Edith Scott (Russell) Lovell. He was the middle child with an older brother (Bob) and a younger sister (Margaret). During his childhood, the family lived in Nutley, New Jersey.[2] As a youth, Lovell developed an interest in art and the American Indian.  When visiting the New York Museum of Natural History, he would sketch the Native American weapons, clothing and artifacts.[3] Later, as high school valedictorian, he would give a speech titled, “Ill treatment of the American Indian by the U. S. Government.”[4]

As Lovell advanced in his career (and as pulp magazine publications declined), he moved on to illustrating for “slick” magazines and advertisements. Before World War II, he illustrated for The American, Woman's Home Companion, and Cosmopolitan.

In 1934, he married Gloyd “Pink” Simmons, eventually having two children. The family first lived in Norwalk, Connecticut, moving to Westport, Connecticut in 1940. At the time, Westport was home to many artists, including fellow illustrators Al Dorne, Harold Von Schmidt, John Clymer, Stevan Dohanos, and Robert Loughweed.[6]

After the war, Lovell continued to illustrate for magazines, including McCall's, Redbook, Ladies Home Journal, and Colliers.[8] He also painted a series of historical subjects for National Geographic Magazine, illustrating articles on the Vikings, Alexander the Great, the Bible, and the American Civil War.[9]

Lovell also completed a series of paintings for the Church of Latter Day Saints. His colleague, Harry Anderson, had already been working on a series of Biblical paintings. Lovell took on the illustration of scenes from the Book of Mormon.[10] Anderson’s and Lovell’s works remain well-known among Mormons and are still used in the Church of Latter Day Saints’ publications.[11]

During and after the 1960s, Lovell increasingly focused on the American Southwest. In 1969, Lovell was commissioned by George and Gladys Abell to produce a series of paintings for the future Permian Basin Petroleum Museum in Midland Texas. In 1995, Tom Lovell said the paintings he did for the Abell Foundation were "some of the most important commissions in (his) life."[12] In 1975, Lovell and his family moved to Santa Fe, New Mexico, continuing to create works centering on Native Americans and the American Southwest.[13]

In 1997, both Tom Lovell and his daughter Dorothy died tragically in a car crash in Santa Fe.

Another source for biographical information on Tom Lovell are his papers housed at the National Cowboy Museum: http://drc.nationalcowboymuseum.org/findingaids/collections/lovell.aspx