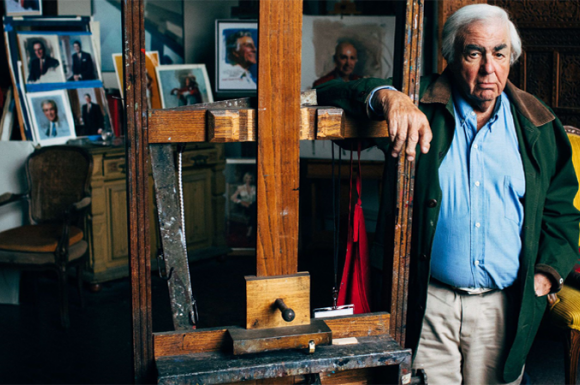 “It’s all about connecting with the past,” says Everett Raymond Kinstler (b.1926), a belief that he firmly asserts as he talks about his life as an artist and his seventy year career. Connections are indeed what it’s all about for Kinstler, whether speaking about his early career as a comic book and pulp artist, the inspiration he gleaned from John Singer Sargent, or his close friendships with influential illustrator James Montgomery Flagg and noted painter Sidney Dickenson. This has remained so in his later years while working as a highly in-demand portrait artist whose compositions have been collected by noted institutions nationwide, from the Smithsonian Institution’s National Portrait Gallery and Ohio’s Butler Institute of American Art to New York’s Players Club and Society of Illustrators.

A native New Yorker, Kinstler’s artistic interests were supported early in his life by his parents—in particular his father, who reminded him that it is a gift to be able to work and do something one loves for a living. Of his life as a boy in the 1930s and '40s, the artist has fond memories. “Growing up in New York City, I went to the usual city public school, played baseball, and did all the things that most kids do, but most of all, I drew.” He developed an early appreciation for illustration during this influential period, becoming an avid fan of the periodicals that were loaded with top-rate illustrations. Talents like Mead Schaeffer and John Atherton were regular cover artists at the time, and most salient is his recognition of Norman Rockwell and J.C. Leyendecker as titans in the illustration field. Kinstler also became an avid movie-goer, which sparked a life long interest in visual storytelling and the larger-than-life figures that populated the silver screen.

Talented academically and artistically in his youth, Kinstler gained entrance to New York City’s highly regarded High School of Music and Art, where he was surrounded by creative students and teachers but frustrated that his desire to study illustration and comic book art was not encouraged. In 1944, he transferred to the High School of Industrial Art, a trade school that trained young artists the skills to make a living in the field of commercial art, and there, Kinstler immersed himself in life as a working artist. Honing his skills as a draftsman and realist painter, he began to earn his first commissions and make a living in the field of his dreams.

At about the age of sixteen, Kinstler decided to leave school and enter the professional art world, a decision that influenced the rest of his life. Consumed with the desire to become “a living, breathing working artist,” he began to circulate his “meager” portfolio, and responded to a job advertisement from comic book publisher, Cinema Comics, where Richard Hughes was the editor. After a brief interview, Kinstler was hired as an “apprentice inker,” and for a salary of $18 for a six-day week became a member of the working world. The experience proved to be invaluable: Kinstler took on numerous assignments, from landscapes, figures, and animals to countless inanimate objects. His early work taught him to connect with the reader and tell a story, essential skills that brought him additional work as a freelance illustrator for comics and pulp magazines. Doc Savage, The Shadow, Hawkman, and Zorro are just some of the pulp figures that he brought to life. Soon, Kinstler’s success as an independent artist made it possible for him to leave what was to be his one and only salaried job and begin to freelance full time. Always at the drawing board, he continued to work in comics, inking and penciling strips and illustrating for the pulps, which were inexpensive fiction magazines that remained popular through the 1950s.

While working full time, Kinstler took the advice of an older, more experienced artist and made the decision to return to school in 1945 to further advance his skills. At the Art Students League in New York, he studied under the well-respected American illustrator and impressionist painter Frank Vincent DuMond, who taught at the Art Students League for almost sixty years. His influence on Kinstler is reflected in an oft-repeated statement: “I won’t try to teach you to paint, but to see and observe.” In painting portraits, Kinstler does not try to create an exact copy of a subject but rather captures the spirit and essence of the sitter through close observation.

Drafted into the Army in 1945 but stationed in the New York area, Kinstler continued to work as an artist by creating a comic strip for an Army newspaper. He also worked on freelance assignments from editors who “mailed me illustration assignments during my period of service.” After receiving his discharge, he took advantage of the momentum of his budding career and decided not to return to the Art Students League. Instead, he created images for comics, rendered book jacket illustrations in watercolor and oil, and developed a deepened appreciation for the masters through his exploration of the many great museums in the New York metropolitan area.

Kintsler’s explorations led to his use of life models and working with photo references of his models. While utilizing these techniques he again touched upon one of the recurring themes of his life and work: connections, in the sense of both making them and appreciating them in people, history, and art. Kinstler has a gift for connecting life to art, and art to life. In painting portraits, he has the ability to understand just who the sitter is and to convey both self-image and public persona. His renderings are at once iconic and immediately personal. A combination of hard work and talent, sprinkled with a smattering of propitious events, has made his career both inspiring and important.

In 1949, a touchstone year in his life and career, Kinstler moved into his own studio when his former teacher Frank Vincent DuMond assisted him in securing a space in the historic National Arts Club, where he continues to work today. That same year, he sought out and befriended one of his artistic idols, James Montgomery Flagg, who is perhaps best known for his finger-wagging Uncle Sam in I Want You for the U.S. Army, the iconic World War I recruiting poster. Their friendship would prove to be a boon for both of their careers, as Kinstler was able to absorb the knowledge of the older artist and Flagg would gain a lifelong advocate for his painting and his legacy. Connections in the artist’s life continued to remain strong because, as fate would have it, both Kinstler and Flagg studied at the Art Students League under DuMond. Both were also gifted illustrators who captured the likenesses of the noted cultural figures of their day. Their friendship continued until Flagg’s death in 1960. Kinstler remembers this professional relationship as his greatest influence. “What Flagg taught me is that technique isn’t important in itself. It’s only a means to an end.”

During the 1950s, the world of illustration underwent a monumental shift as the result of technological advances in media. The popularity of television and the increasing reliance on graphic design and photography started to supplant the use of traditional illustration, which had dominated print publications. Previously robust illustrated magazines found themselves in decline by the mid-1960s due to the erosion of readership and advertising revenues, which also reduced opportunities for skilled illustrators. Kinstler continued to work in the illustration field during this time of change, but his interest in painting and his skill in capturing likenesses made it possible for him to “back into portraiture,” a natural progression “since painting people was always what I enjoyed most.”

A friendship with portraitist John Christen Johansen inspired Kinstler to finesse his touch as a painter and gain the artistic chops to make inroads into portraiture. Like DuMond, Johansen emphasized the importance of observation and working from life. He stressed that an artist should not become overly reliant on photographs; rather, he should attempt to “achieve simplicity” in painting. These were lessons that Kinstler took to heart. In the 1960s, the artist approached Portraits, Inc., a New York-based company that connected portraitists with sitters. This exposure led to commission after commission, and eventually portraiture became a mainstay for Kinstler, who, in the mid-1960s, left the field of illustration behind.

Kinstler’s success as a portrait artist is evident in even a cursory glance at his illustrious roster of sitters. A Who’s Who of American history and culture across the 20th century, his clients have included author and illustrator Theodor Seuss Geisel (Dr. Seuss); author Tom Wolfe; Presidents Gerald Ford, Richard Nixon, Ronald Reagan, Jimmy Carter, George H.W. Bush, Bill Clinton, and George W. Bush; artists Paul Jenkins, Jacob Lawrence, and Alexander Calder; actors John Wayne, Katharine Hepburn, Liv Ullmann, and Paul Newman―just a few of the famous and influential people whom he has captured on canvas through the years.

After almost seven decades in the arts, Kinstler keeps his skills sharp and his approach to his work fresh by painting from life. He also creates noncommissioned works that reflect both his interest in experimentation and his continued artistic growth. Be it a study of a nude, a Mexican landscape, or, as seen in this exhibition, his recent art inspired by classic cinema and popular American icons, he continues to express his love of the artistic process and his connection with his subjects and viewers—an affirmation of his father’s advice all those years ago when Kinstler first conveyed a desire to forge a career in the arts: “It’s all about connecting.” 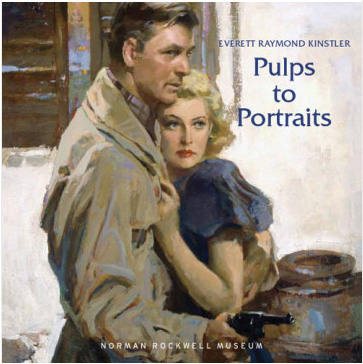