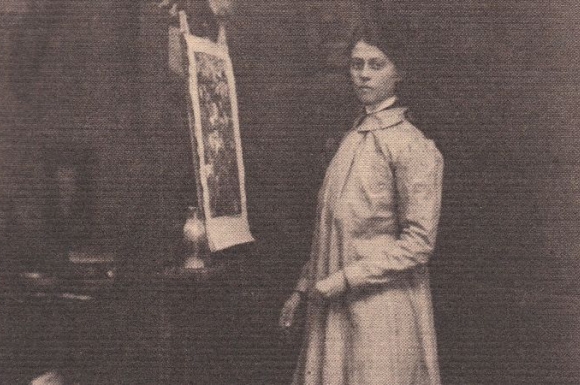 Charlotte Harding was born on August 31, 1873 in Newark, New Jersey. She spent much of her youth in Philadelphia, where she moved with her family in 1880. As a teenager, her artistic talent drew the notice of a family friend. Encouraged to pursue a profession in illustration, she applied and was accepted to the Philadelphia School of Design for Women (now Moore College of Art and Design). There, she studied under Robert Henri before she became an instructor herself in 1895. She continued her education at the Pennsylvania Academy of Fine Arts and the Drexel Institute of Illustration. While at Drexel, she studied under Howard Pyle. Pyle was known as one of the most popular American illustrators of his time, but was also an art educator who mentored many notable pupils, including Jessie Willcox Smith, Elizabeth Shippen Green, and Violet Oakley.

At the time when Harding began her studies, women were not welcome in any of Philadelphia’s arts organizations. In 1897, the Plastic Club was founded in response to this problem. This group promoted “a wider knowledge of art and to advance its interest by means of exhibitions and social intercourse among artists.”[1] Its name used the term “Plastic” in reference to “the state of any unfinished work of art.”[2] Harding was one of the club’s founding members, and remained a member until 1913. Thanks to this organization, she had the opportunity to exchange ideas with fellow female artists. She also participated in events held by the group, such as exhibitions, lectures, and classes.

Harding’s works appeared in a number of magazines, including Good Housekeeping, The Saturday Evening Post, Harper’s Bazaar, and Ladies’ Home Journal. She received many commendations for her work, including medals at the St. Louis Exposition in 1904 and the Panama-Pacific Exposition in 1915.

This biography was contributed by Anastasia O’Neill, project archivist at the Norman Rockwell Museum. She earned her Master of Science degree from University of Albany, SUNY, with a focus on Information Science, Archives, and Records Administration.