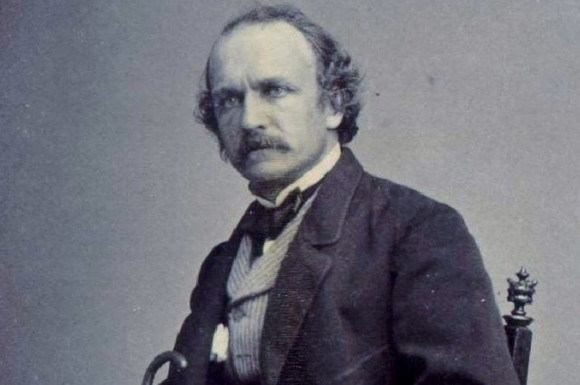 Felix Octavius Carr Darley (1822-1888) is credited as a pioneer of illustration in the United States. Combining the American viewpoint and his own style, his work inspired future generations of illustrators. Darley’s illustrations were perhaps the first works of art that many Americans in the mid-1800s experienced.[1]

Darley was born in Philadelphia on June 23, 1822, to English-born parents. His mother was a well-known actress, and his father, once an actor, served in the Marines as a lieutenant. The acting world interested Darley, but he became fascinated with drawing at an early age. Without any formal training, he constantly practiced drawing on paper and looked to pictures and his surrounding environment for inspiration. Darley’s parents praised his precocious skill, but encouraged a career path in the commercial world. Accordingly, at age fourteen, Darley became a clerk apprentice for the Philadelphia Dispatch Transportation Line. Holding this position until age twenty, he sketched scenes of the docks where he worked. His caricature drawing of a drunkard from this time later attracted the attention of Thomas Dunn English, a Philadelphia critic. Aware of the publishing industry’s growing employment opportunities for artists, Darley left the apprenticeship and carried his portfolio to Philadelphia publishing houses in hopes of receiving assignments.

In his first year as an illustrator, Darley met Edgar Allen Poe, who, while working on his Saturday Museum in Philadelphia, purchased several of Darley’s street scene drawings. The renowned poet and fiction writer admired Darley’s unique draughtsmanship, and displayed two of his vignette illustrations in his famous short story, The Gold Bug, which appeared in the Dollar Newspaper.

In 1842, Darley went on a trip to make sketches for his new series: Scenes of Indian Life. Influenced by the styles of German illustrator Moritz Retzch, Darley produced outline drawings of Native Americans with no shading or modeling of form. Poe praised his drawings in a Saturday Museum critique, saying they “abound in spirit and are in all respects meritorious.”[2] The Philadelphia press saw Scenes of Indian Life as an innovative execution of outline drawings.

In his mid-twenties, Darley’s self-taught drawing skills became sharper and more fluid. He could portray several figures together in a fluent and dramatic composition. Oftentimes, Darley illustrated a scene in a straightforward manner, calling attention to a part of the text or a certain idea. He could also portray figures with realistic expressions, gestures, and movements. In sketches and preliminary drawings, Darley drew with sweeping bold lines that would later shape the rhythm of the drawing.[3] He also focused on scenes of drama, incorporating Victorian stage set pieces.

In 1859, at age thirty-seven, Darley left New York City to live in the quiet town of Claymont, Delaware. As the most circulated illustrator in the United States, he was also the first to move away from a publishing city. He visited Paris in 1867 to see his work displayed at the Paris Exposition, and wrote and illustrated a book of his travels.

Darley maintained his top position in the publishing scene for forty-eight years. Over the course of his career, the market for illustrations boomed, as publishers displayed numerous skilled artists’ illustrations in books and periodicals. Darley’s influence in the publishing sphere helped to build the demand for talented illustrators. The technological advances in the printing business and the increase in the literacy rate during the time period also helped spur the growth of illustration.[5] When he was posthumously inducted into the Society of Illustrator’s Hall of Fame in 2001, it was said, “without his influence, or at least that of another hardworking, talented trailblazer, the Hall of Fame, the Society of Illustrators, and this profession generally, wouldn’t exist in America.”[6]

———. Ghost Stories: Collected with a Particular View to Counteract the Vulgar Belief in Ghosts and Apparitions. Philadelphia: Carey and Hart, 1846.

———. Scenes in Indian Life: A Series of Original Designs Portraying Events in the Life of an Indian Chief. Philadelphia: J.R. Colon, 1843.