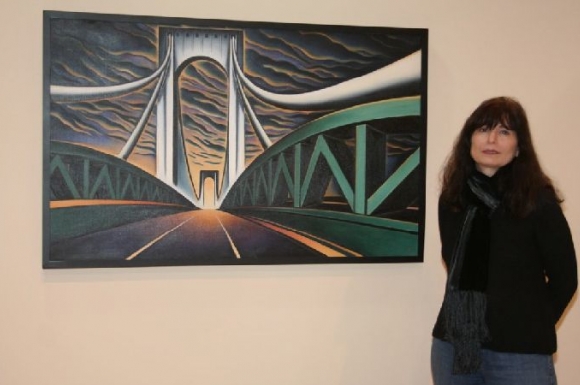 Known by the mononym, Bascove, (b.1946) Anne Bascove is a master printmaker, illustrator, painter, and collagist best known for her striking woodcut book jacket and magazine illustrations as well as for her series of paintings and drawings of the bridges of New York City. Her work has been regularly exhibited in Paris and New York and throughout the United States.

Born in 1946 in Philadelphia, Pennsylvania, Bascove earned her BA from the University of the Arts in Philadelphia. After graduation, she worked with publishing houses worldwide, providing cover art for such literary figures as Italo Calvino, Robertson Davies, Jerome Charyn, and T. C. Boyle. Numerous private and public collections possess works by the artist, including the Museum of the City of New York, the MTA Arts for Transit, the Pennsylvania Academy of Fine Arts, Mount Sinai School of Medicine, the University of Texas at Austin, The New York Public Library, the Musée de Cherbourg, and Norman Rockwell Museum.

An avid reader, Bascove often admired the “book-cover art gracing…copies of André Gide and Willa Cather and also the record jackets of readings by Dylan Thomas.”[1] Her fascination with bridges began in the late 1970s in Paris where she lived near the Seine: “You can’t help but think of the bridges’ histories: witnesses to untold generations of strolling lovers: hundreds of years of turbulent political change.”[2] She also drew inspiration from artist John Baeder whom she accompanied on his early scouting for diners and roadside eateries. She observed how he caught the light of certain hours of the day in his photographs. With her architect husband, Michael Avramides, Bascove drove around the bridges of New York City taking the photographs from which she created her paintings.

Bascove has worked with the New York, Brooklyn, and Roosevelt Island Historical Societies. She has coordinated events with, and lectured at, the Museum of the City of New York, the Central Park Conservancy, the New York City Department of Parks and Recreation, the Municipal Art Society, NYU Fales Library, and the Hudson River Museum.[3]

Three collections of Bascove’s paintings with anthologies of related writings have been published under the titles, Sustenance & Desire: A Food Lover’s Anthology of Sensuality and Humor (2004), Where Books Fall Open: A Reader’s Anthology of Wit and Passion (2001), and Stone and Steel: Paintings and Writings Celebrating the Bridges of New York City (1998).

In 2017 the Norman Rockwell Museum was fortunate to acquire, by generous donation, a comprehensive and significant collection of more than 500 original artworks by Bascove, exemplifying her prominent and distinctive career as an illustrator. [4]