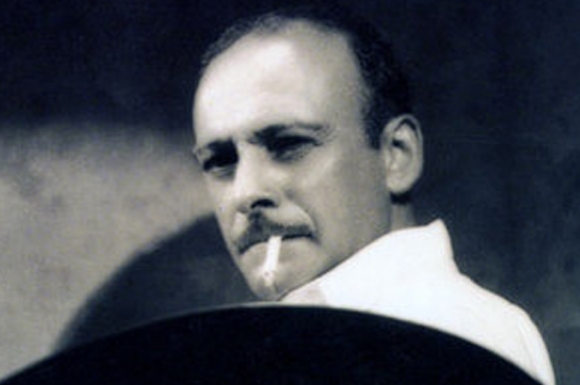 Born in Naples, Italy in 1894, John La Gatta moved to New York’s Lower East Side at the turn of the century. After enduring a lonely childhood fraught with bullying about his Italian accent, La Gatta enrolled in the New York School of Fine and Applied Arts in 1909. Financial difficulties forced La Gatta to leave school in 1911, and Bloomingdale’s hired him on the strength of his portfolio.

Some years later, hearing that La Gatta was frustrated and confined in his work at Bloomingdale’s, a school friend introduced him to the art editor of Life magazine. At the editor’s urging, La Gatta submitted a sketch to the magazine and was asked to submit more work. His painting of a girl playing tennis, which imitated the fade-away style of Coles Phillips, graced the cover of the August 1915 issue of Life. This first big break was followed by an influx of job offers. In Cleveland in 1916, he met art student Florence Olds, whom he married in 1918.

A period of underemployment followed the 1918 marriage of the La Gattas, until a job offer came from the N.W. Ayer advertisement firm in Philadelphia. When N.C. Wyeth fell ill in the middle of an ad campaign for Blue Buckle overalls, La Gatta stepped in to finish it. His work was in suddenly in high demand. Although jobs were plentiful, La Gatta yearned to paint stylish women at leisure instead of blue collar men at work. In 1920 he created a portfolio of paintings and drawings of women. His new work was popular with art directors back in the city, and La Gatta’s career took off with even more vigor than before.

La Gatta was soon illustrating ads for Ajax, Ivory Soap, Fleischmann’s Yeast, and Resinol. Woman’s Home Companion hired him to illustrate fashion spreads. La Gatta lived on a large scale and enjoyed great celebrity from this period until the late 1930s. He illustrated his first story for the Saturday Evening Post in 1923, and in the years that followed he turned out myriad story and editorial illustrations for McCall’s, Redbook, Ladies' Home Journal, and American Magazine, among many others. His charcoal drawings popularized black and white illustration among his contemporaries. Demand for La Gatta’s began to decline, but wartime ad campaigns for Woodbury Soap and Laros Lingerie put bread on the table for La Gatta, his wife, and their two children.

In 1956, with commissions thin on the ground because of the rise of radio, television, and photography and the fall of illustration, La Gatta received an offer to teach at the Art Center School in Los Angeles, which he accepted. Many of La Gatta’s students from his twelve year tenure at the school went on to become professional artists, and his teaching career formed a significant part of his legacy. Although La Gatta’s work fell out of favor in the commercial and fine art world alike, he continued to paint until his death in 1977.