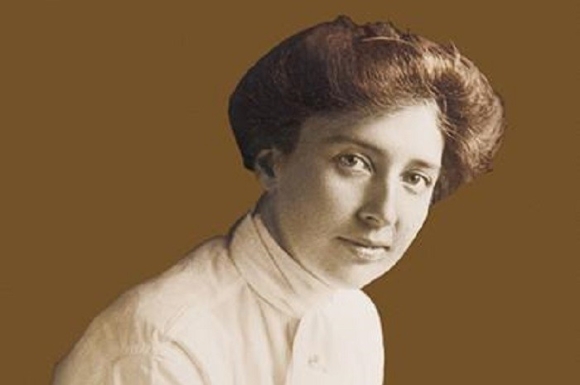 From childhood, Katharine Wireman always wanted to be an artist. Wireman was born in 1878 in Philadelphia to Achsah Richardson and Elliott Richardson. Her father was an obstetrician and gynecologist with his own private practice, and taught at the University of Pennsylvania School of Medicine. In 1887 when Katharine was only eight years old, her father died of typhoid fever. Two years later, her mother died of tuberculosis. Following the deaths of her parents, Wireman and her four siblings were sent to stay with their aunts who resided in Philadelphia. Living with her aunts provided an intellectually stimulating environment. Wireman’s family encouraged her pursuit in illustration. Her aunt Sallie, who was an artist herself, arranged for her to attend Howard Pyle’s illustration classes at the Drexel Institute of Art, Science and Industry.

While at Drexel, she became friends with fellow artists who would remain lifelong friends. During her last year at Drexel, she sold a cover design to The Saturday Evening Post, and had a cover in The Ladies’ Home Journal. Following her studies at Drexel, in 1900 she rented a studio with fellow student, Eugenie M. Wireman, and became a freelance illustrator. Katharine initially worked as a fashion illustrator for Philadelphia Record and Philadelphia Press, until a few years later, when she gained an exclusive contract with Curtis Publishing Company and began drawing for The Ladies’ Home Journal. In 1905 she married Eugenie’s brother, Henry, and the two moved to Covington, Virginia where they had their first two children. While living in Virginia, Wireman worked on illustrations from home for The Ladies’ Home Journal and Good Housekeeping.

She continued to work for numerous national magazines and national advertising companies when the family moved to New York in 1910. They stayed there until 1913, and then moved back to the Germantown section in Philadelphia. Her third child was born in 1920, and all three children would sometimes serve as models for her work. By this time, Wireman was receiving a variety of story illustration and cover commissions, allowing her to become the sole financial supporter of the family. Unfortunately, in 1931, Henry died from a heart attack at the age of 54. At 70, Wireman began devoting her time to volunteer work, and during the last decade of her life, she worked as editor for the Germantown Crier, eventually earning the title of Editor Emeritus upon her retirement. On April 23, 1966, Katharine Wireman died at her home in Philadelphia at the age of 87.

Wireman was a prolific and successful artist who illustrated books, advertisements, and magazines including The Country Gentleman, The Ladies’ Home Journal, The Saturday Evening Post, and Collier’s. Prior to her cover for The Saturday Evening Post, which wouldn’t be published until September 1906, her illustration for the January 1905 issue of The Ladies’ Home Journal was released and featured the first baby to appear on the cover of a magazine. Wireman’s excellence at depicting women, children, and families won her the recognition of newspaper and magazine editors. Her illustrations were emotive and entertaining, which also earned her repeated commissions.

Estate of the artist or Publisherhttps://www.illustrationhistory.org/illustrations/girl-and-boy-with-willow-whistles