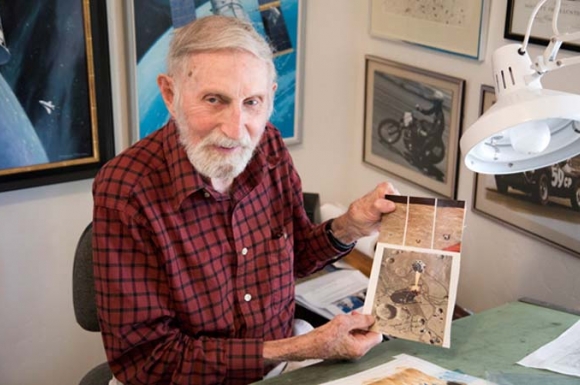 Pierre Mion (b.1931) has had a prodigious career as both an illustrator and a painter of natural history subjects. Mion states, “While my main goal is to satisfy my creative drive, I have a strong need to both inform and please other people with my art. Great joy for me is capturing the fragile beauty of our planet.”

Mion has participated in numerous research assignments, mainly for the National Geographic Society. Such projects include working with Jacques Cousteau in Monaco, covering the great Alaskan earthquake, South African and South American gold mines, and testing deep diving submersibles in the Bahamas. During the Vietnam conflict Mion worked simultaneously for the U.S. Marine Corps and National Geographic creating combat art and story illustrations. Mion was a member of the Apollo 16 recovery team aboard the U.S.S. Ticonderoga in the South Pacific and covered many rocket launches at Cape Kennedy. Traveling across the United States on a motorcycle, Mion conducted solar architecture research for the Smithsonian Institution.

In 1966 Norman Rockwell called on Mion to assist him with a series of space paintings for Look magazine. They collaborated on a number of assignments for both Look and IBM until Rockwell’s death in 1978.

In 2005 National Geographic held a retrospective exhibit of 100 illustrations at the Norman Rockwell Museum in Stockbridge, Massachusetts including five works by Pierre Mion.

Gilbert Grosvenor, President and Chairman of the Board of The National Geographic Society once noted, "As an illustrator, Pierre Mion is exceptionally gifted. His paintings of both undersea and space exploration have been widely acclaimed. His accomplishments in the fine arts have proven equally successful. His creativity, like his lifestyle is bold and exciting.”