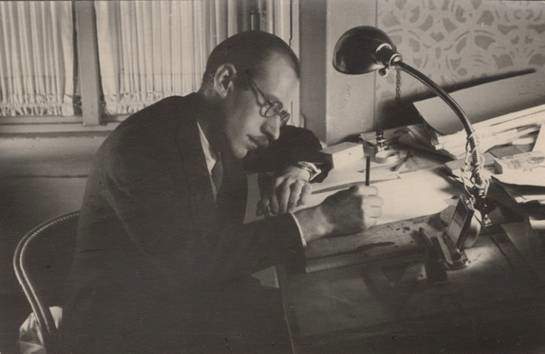 Saul Steinberg (1914 -1999) was a masterful artist who relished his engagement with the visual world and post-war society in 20th century America. Although best known for his incisive wit and brilliant New Yorker drawings created over six decades, he moved across disciplines with assurance and ease, creating art for all manner of things, from wallpapers and fabrics to public murals, stage sets, and advertisements. Never satisfied with the limitations of a single evolving style or approach, he continued to reinvent himself throughout his long and prolific career in his collages, prints, paintings, and sculptures which are steeped in modernist styles and influences, filled with humor, and endowed with a fantastical and absurdist streak.

Deeply rooted in New York, the artist’s home for fifty-seven years, Steinberg was born in 1914 in a small town in Romania to second and third generation Russian Jewish parents. Shortly after his birth the family moved to Bucharest. The son of a printer and a bookbinder, Steinberg was raised in what he called “the Turkish delight manner,” in a world where Ottoman and western styles intermingled, and tradition and modernity intersected. Sidewalk cafes, neon lights, and car filled streets existed in tandem with horse drawn carts, street peddlers, and apartment courtyards teeming with life. The Balkans of Steinberg’s youth provided access to a vibrant mixture of cultures, religions, and ethnic influences that would inform his art and establish his interest in the unique qualities of people, places, and things, large and small.

Steinberg grew up in a Romania dominated by antisemitic nationalism. He studied philosophy at the University of Bucharest, and then, in 1933, went to the Politecnico in Milan to pursue architecture. That training, along with early work as a cartoonist for the Italian humor newspaper Bertoldo, honed his gift for subtle graphic invention. By 1940, major journals, including American ones like Life and Harper’s Bazaar, also began to publish Steinberg’s art. In early 1941 he was forced to go into hiding due to antisemitic racial laws in Fascist Italy; he was later arrested, spending a month in a detention camp. After his release he fled Italy, reaching neutral Portugal in June 1941. In Lisbon he managed to get on a boat to America, thanks to a “slightly fake” passport he had doctored, but was refused entry at Ellis Island and deported to Santo Domingo. While there, awaiting a United States visa, his work began appearing regularly in The New Yorker. The magazine was then in its heyday, publishing leading authors, critics, and humorists, and was famous (as it still is) for its cartoons. Steinberg’s unique imagery and style, with its whimsical line and Cubist influences, was instantly popular, and brought his art to vast, loyal audiences at the turn of a page. The magazine eventually sponsored him to enter the United States in 1942.

Steinberg’s penchant for creating “slightly fake” documents resulted in one of his earliest books of drawings, entitled The Passport. Published in 1954, the book satirizes government infatuation with documents and stamps. The collection of drawings is a perfect example of the artist’s talent for blending the old and the new, the fantastical and the precise. Living in Fascist Europe, and then as a Jewish exile from it at the beginning of World War II, Steinberg himself had to procure and produce myriad documents first as a suspect person and then to obtain safe haven in a new land. Some of the drawings are Steinberg’s imagined creations of official bureaucratic paperwork, complete with signatures, seals, and fingerprints, calling into question the need for the authentication of identity. But Steinberg’s early book The Passport does not only ridicule bureaucracy—it also functions as his own passport into the realm of American art, introducing a number of components that recur in his work throughout his career, such as his peculiar use of photography, the centrality of the mask as a device, and the importance of architecture as muse.

Steinberg’s favorite occupations were drawing and travelling, the one nourishing the other, in the words of Robert Hughes, the art critic for Time magazine. His art is a kind of whimsical, absurdist travelogue of America—much like Nabokov’s Lolita, to which it has often been compared. In 1942, soon after moving to New York, he set out by train to the see the country from coast to coast. Steinberg’s later work Car, a photographed hallah on wheels, associates the bread, an emblem of the Jewish immigrant, with automobiles, the great American obsession: both have shiny surfaces. Perhaps Steinberg meant his hilarious creation as a commentary on his own condition as a traveling immigrant Jew on the roads of America.

“Being an immigrant made one into a child,” Steinberg said. “A child who talked funny and noticed things natives never did.” From the time of his arrival in New York, he walked the streets of his adopted city with a freshness of vision that never grew jaded. The city captivated him, and nothing escaped his attention, from billboards, signs, and shop windows to automobiles, graffiti, and architectural ornamentation. Steinberg understood that in America high and low, beautiful and ugly, native and foreign joined forces to engender a sense of possibility and reinvention. Harold Rosenberg, The New Yorker’s influential art critic and friend of the Abstract Expressionists, was an admirer. For him, Steinberg’s immigrant status “affected his work to a degree that could not be overstated.” New Yorker staff writer Adam Gopnik has noted that the cartoonist’s place, on the margins of “high” art, was precisely the place Steinberg liked best, providing him with a vantage point outside the frame.

Ware, Chris and Mark Pascale. Along the Lines: Selected Drawings by Saul Steinberg. Chicago, IL: The Art Institute of Chicago, 2017.