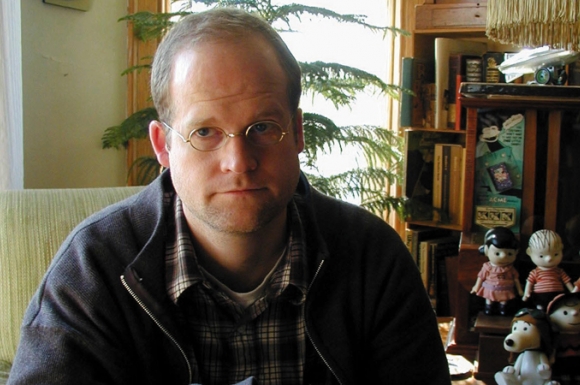 One of the most innovative and talented graphic artists of his generation, Chris Ware (b.1967) is acclaimed for presenting narrative illustration in a form and style vastly different from that of his contemporaries.

Ware’s creative evolution is borne from the seemingly mundane—a childhood in Nebraska with cartoonists in his family, admiration of Charles Schulz’s work on Peanuts, and light television fare such as Bewitched and Gilligan’s Island. While easy to dismiss as hokey, these influences are clearly evident in his award-winning work like Building Stories, The ACME Novelty Library, and Jimmy Corrigan: The Smartest Kid on Earth—a deeply personal examination of one man’s struggle in a life filled with rejection and loneliness. On the power of the medium Ware noted, “Comics, at least in periodical form, exist almost entirely free of any pretense; the critical world of art hardly touches them, and they're 100% personal.”

Ware’s formal education occurred at the Art Institute of Chicago where he studied printmaking. While his personal work details the struggles inherent within human existence, he has also applied his artistic skills to commercial projects such as covers and interior work for newspapers and magazines, including The New York Times, Esquire, and The New Yorker, where he has been a contributor since 1999. In 2002, Ware was the first artist in his field to have work exhibited in the Whitney Museum of American Art biennial exhibition.

Ball, David and Martha Kuhlman. The Comics of Chris Ware: Drawing Is a Way of Thinking. Jackson, MS: University Press of Mississippi, 2010.