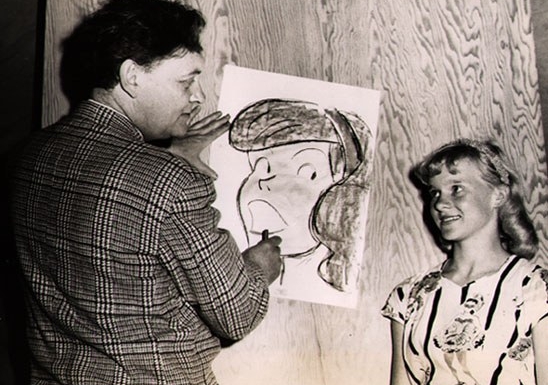 Harry Haenigsen (1901–1991) was an American cartoonist best known for his comic strip, “Penny,” about a teenage girl enjoying the heyday of sock hops and malt shops. A reflection of its time when teenage-themed cartoons were immensely popular, the strip ran from 1943 to 1970. In addition to his career as a cartoonist, Haenigsen was a successful illustrator, producing numerous drawings for magazines, books, and advertising. He also shared his expertise as a cartoonist with other aspiring artists through a cartooning course he established with his colleagues, cartoonists Rube Goldberg, Milton Caniff, Al Capp, Virgil Partch, Whitney Darrow, Jr., and others.

Born in New York City, Haenigsen’s family moved to Pompton Lakes, New Jersey when he was very young. He started drawing cartoons for a local paper while still attending high school in New Jersey. Though he was leaning toward pursuing an interest in engineering, a visit to the New York World was instrumental in changing his mind. At the World offices, Haenigsen visited Thornton Fisher, a sports cartoonist he long admired. Fisher saw promise in Haenigsen’s work and proposed that if Haenigsen would attend the Art Students League in New York, then Fisher would help him land a job at the World.[1]

Along with his studies at the Art Students League, Haenigsen also took the Eugene “ZIM” Zimmerman’s cartooning correspondence course. Since there were no openings at the World in 1918 when he completed his studies, Haenigsen took a job at Bray’s animation studio until a position at the World opened up in 1919. Among his assignments at the paper was that of courtroom sketch artist at the trial of Bruno Hauptmann, who was executed for kidnapping and killing Charles Lindbergh’s baby. During this time, Haenigsen created his own strip, “Simeon Batts,” about radio and radio listeners. He also sold freelance cartoons to Colliers, Life, The New Yorker, Photoplay, and the New York Evening Mail.[2]

In 1925, Haenigsen married Bobby (stage name, Jeanette Kerr), a singer and dancer who performed with George M. Cohen and John Philip Sousa. They moved to rural Bucks County, Pennsylvania in 1937 and then to Lambertville, New Jersey in 1939. That year, Haenigsen created the “Our Bill” strip, run by the New York Herald Tribune Syndicate. The strip ran daily for twenty-seven years. In 1943, Haenigsen was approached by Helen Rogers Reid, the wife of the New York Herald Tribune publisher, Ogden Mills Reid, to create a strip with a girl as the central character. Thus “Penny” was born. Haenigsen researched teen habits and jargon at a local malt shop, sketched his daughter Jeanne as she spoke on the phone in various positions, and observed neighborhood teens at open houses he and his wife often hosted to get inspiration for his strip.[3]

“Penny” was immensely popular and written in collaboration with Haenigsen’s colleague, Howard Boughner. In 1968, however, Haenigsen lost his wife in a car accident and, along with her, his desire to continue the strip. “Penny” was picked up by two other cartoonists, but was discontinued in 1970.

Involved in artistic as well as community projects, Haenigsen helped found the National Cartoonists Society in 1946 and the Famous Artists School’s cartooning course in 1956. He also became the director of the Bucks County Playhouse and the Playhouse Inn in New Hope, Pennsylvania. Haenigsen’s Jive’s Like That: Being the Life and Times of Our Bill was published in 1947 and several Penny collections were published from 1953 to 1954. When he was 77 years old he married Ellen A. Hall. In 1981, he was named director of the first Lambertville Art Shad Festival, and in that same year published a shad cookbook. He also contributed a recipe to The Cartoonist Cookbook. Haenigsen died in 1991 in Warminster, Pennsylvania.[4]

Haenigsen, Harry and Christopher Morley. Jive’s Like That: Being the Life and Times of Our Bill. New York: Procyon Press, 1947.