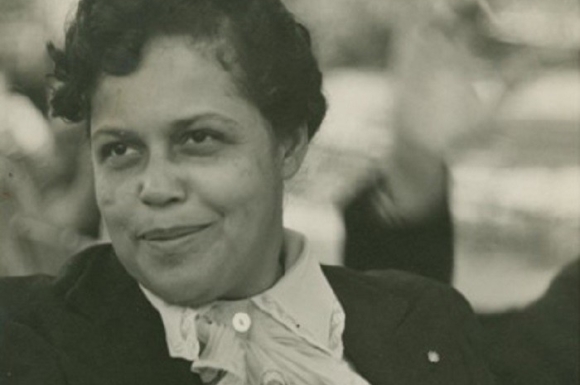 Born to Joshua and Maime Bennett, Gwendolyn Bennett was an African-American poet, writer, teacher, and artist. Growing up, Bennett was raised on an Indian Reservation where both of her parents worked as teachers. The two later divorced and Maime obtained custody of her daughter. However, her father — who was upset with the settlement agreement and had already remarried — kidnapped Gwendolyn. In 1910 he took her, along with his new family, and proceeded to move from town to town along the east coast. Gwendolyn wound up in New York City where she was enrolled at Brooklyn Girls’ High. There, she became the first African-American student to be elected into the school’s Literary and Drama societies.

After she graduated in 1921, Bennett enrolled at Columbia University. However, due to the racial atmosphere that was prevalent on the campus, she transferred to Pratt Institute where she studied drama and fine arts, and architecture and planning. Prior to graduating, Bennett had two of her poems published in two prominent black magazines — “Nocturne” was published in the November 1923 issue of The Crisis, and “Heritage” was included in the December 1923 issue of Opportunity. After graduating from Pratt, Bennett became a member of the Fine Arts Department at Howard University where she taught as an assistant professor. She received a scholarship and continued her studies at the Académie Julian, and the École du Pantheon in Paris where she worked with a variety of mediums including watercolor, oil, woodcut, and pen and ink. Bennett returned from Paris and soon became involved with medical student, Alfred Jackson, and resigned from her teaching position. From 1926 to 1928, Bennett began working as an assistant editor for Opportunity under Charles S. Johnson — the first black president of Fisk University, a sociologist, and the founder and editor of Opportunity.

While working as assistant editor, she was given a literary and fine arts column in the magazine. Bennett’s column, “The Ebony Flute,” praised and distributed news about the artists involved in the intellectual and cultural revival of African American music, literature, and art.

After Jackson graduated, the two moved to Florida where he worked as a physician. However, Bennett became isolated and unhappy. She was working as a teacher in a segregated school system, and going through a difficult marriage. The culmination of these things led her to abandon her art and poetry. In the early 30’s, Bennett was able to convince her husband to leave Florida and move to Hempstead, New York. They bought a house together and Bennett began work as a journalist for the Department of Information and Education of the Welfare Council of New York. In 1934, Jackson became ill, and died the following year. After his death, Bennett moved to a studio in Harlem, owned by Augusta Savage — a noted sculptor who came to prominence during the Harlem Renaissance. During the late 30’s, Bennett left her job at the Welfare Council and soon became the Director of the Harlem Community Art Center under the WPA. However, the center became a focus of investigation by the House Un-American Activities Committee (H.U.A.C.) for proposed communist affiliations. Following the investigation, she was suspended and later dismissed as director in 1941.

While in New York, she went back to writing poetry, and her work began reflecting the changes in her life. Prior to her husband’s death, Bennett’s work was optimistic and cheerful. After Jackson’s death and during the late 30’s, her work became more somber and bitter.

In 1940, Bennett became involved with Harvard grad and fellow school teacher Richard Crosscup. During this time, Bennett’s life had become more serene, and her poetry was more open to the world. She later became a founding member and director of the George Washington Carver School. However, the school and its staff became highly controversial, and were continuously harassed and investigated by the H.U.A.C., which led to the departure of many teachers and eventual closure in 1947.

Bennett later became active in groups like the National Negro Congress, and the Negro People’s Theater. However, these groups and organizations were all indicted and placed under investigation by the H.U.A.C. as communist fronts. In the 1950’s, she retired from public life, and her and her husband retired to Kutztown, Pennsylvania where they opened and operated their own antique shop. Richard later died in 1980, and the following year Bennett passed away in Reading, Pennsylvania at the age of 78.

Unfortunately, much of Bennett’s original work has been destroyed or cannot be found. Bennett rarely exhibited or marketed her artwork, and some of her earlier work from abroad was destroyed in a fire in 1926 at her step-mother’s house. After Bennett died, more of her work was destroyed in yet another fire in the 1980s.