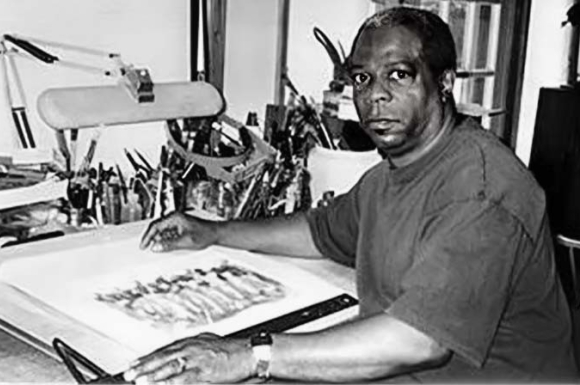 Tom Feelings studied cartooning and illustration at the School of Visual Arts in New York before joining the Air Force. Upon his return to civilian life, in 1958 Feelings created the weekly comic strip Tommy Traveler in the World of Negro History, published in the Harlem-based newspaper New York Age. In the comic, Tommy immerses himself in books written about famous Black historical figures and travels through time to meet them. Inspiring to all children, Tommy meets figures such as Aesop, a former Greek slave from the sixth century BCE famous for his fantastical fables; Crispus Attucks, the first American killed in the Revolutionary War; abolitionist Frederick Douglass, who escaped slavery in 1838 and became the most photographed man of the 19th century; boxer Joe Louis; and Emmett Till, a fourteen-year-old boy who was tortured and lynched in Mississippi in 1955 for allegedly flirting with a white woman.

In 1960 the NAACP hired artist Tom Feelings to illustrate the sixteen-page comic book, The Street Where You Live. The NAACP hoped the educational booklet would bring attention to the importance of voter registration, while stressing the power elected officials have in improving urban neighborhoods.

In 1972, Feelings became the first Black illustrator to win the Caldecott Medal for Moja Means One: Swahili Counting Book, which was written by his wife; he won again in 1975 for Jambo Means Hello: A Swahili Alphabet Book. He continued to illustrate children’s books until his death in 2003.