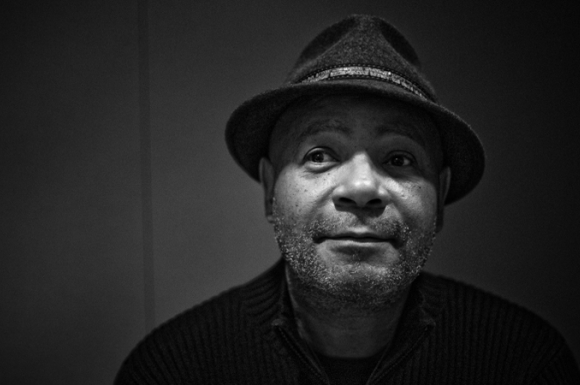 An illustrator of graphic images depicting the struggles of African Americans, Emory Douglas became an influential force within the Black Panther Party from 1967 to 1980. Douglas' images were printed on the covers and interiors of the organization's eponymous newspaper, The Black Panther. His depictions of African Americans as revolutionary fighters, instead of victims, and illustrations of pigs in place of police and politicians made Douglas a hero to his community and a subject of investigation by the United States government.

Activists Bobby Seale and Huey Newton founded the Black Panther Party in October 1966 in reaction to police brutality and socioeconomic inequality among the growing black population of Oakland, California. One method they used to achieve change was through the threat of violence. Carrying loaded shotguns, Seale and Newton organized patrols to monitor the police force of Oakland. Douglas joined the Black Panthers in January 1967 and was put in charge of publishing the group's newspaper.

In the May 15, 1967 issue of The Black Panther, the group published a set of guidelines for their movement they titled the "Ten-Point Program":

1. We want freedom. We want power to determine the destiny of our Black Community.

2. We want full employment for our people.

3. We want an end to the robbery by the Capitalists of our Black Community.

4. We want decent housing, fit for shelter of human beings.

6. We want all Black men to be exempt from military service.

7. We want an immediate end to POLICE BRUTALITY and MURDER of Black people.

8. We want freedom for all Black men held in federal, state, county and city prisons and jails.

9. We want all Black people when brought to trial to be tried in court by a jury of their peer group or people from their Black Communities, as defined by the Constitution of the United States.

Douglas' powerful imagery of the 1960s, accomplished through the media of silkscreen and collage, mirrored the mission of the Black Panther Party by prominently featuring revolutionaries wielding weapons, depictions of police as pigs, and messages such as "Revolution In Our Lifetime" and "The Blood Of The Pig Must Flow Through The Street."

The goals of the organization shifted in the 1970s to community assistance through programs like Free Breakfast for Children, free healthcare, free education, and drug counseling, and attempts to gain political power through running for public office. During this period, Douglas' illustrations changed from ones of revolution to images addressing support of black businesses, opposition to political corruption, and promotion of the free services offered by the Black Panthers.

Membership of the Black Panther Party began to decline throughout the 1970s due to failed leadership, violence and corruption within the group, and accusations that Huey Newton assaulted police officers and murdered civilians, causing him to flee for Cuba.

Douglas continued to illustrate for The Black Panther throughout the 1970s, focusing on the core issues on which the organization was founded. His work on the newspaper ended when membership in the group reduced dramatically in the early 1980s.