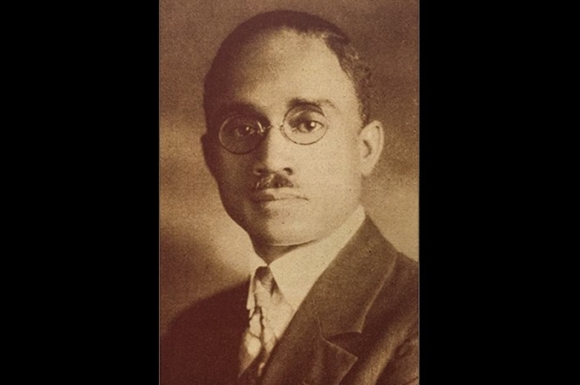 An influential Chicago artist in the 1920s and ’30s, Charles Clarence Dawson was widely known for his illustrated advertisements. He attended Tuskegee Institute for two years before moving to New York. While in the city, he attended the Art Students League where he became the first African American to be admitted into the program. However, due to the pervasive racism that he experienced, he left the school to attend the School of the Art Institute of Chicago. After graduating from the Institute in 1917, Dawson enlisted in the army and fought in France during World War I as a member of the 365th Regiment of the 92nd Infantry Division.[1]

Following the war, Dawson returned to Chicago and worked for the Chicago Engravers as a salesman and account manager.[2] In 1922, he left his job and became a freelance artist. In 1927, he took part in the first exhibition of African American Art: “The Negro in Art Week.” Organized by the Chicago Woman’s Club, the exhibition was held at both the Club and the Art Institute. The exhibition ran from November 16 to November 23 and was a comprehensive collection of works which showed the progress of African and African American art from early, ritualistic pieces, to modern and contemporary works by well-known painters and sculptors of the time. Artists represented in the show were among the very best. The program included works covering various genres like literature, sculpture, painting, applied arts, and music. The poster for the exhibit was designed by Dawson, and he also served as the Chairman of the Sub-Committee on Fine Arts. Dawson’s work was also displayed in the exhibition, alongside works from well-known black artists like Aaron Douglas, Henry Ossawa Tanner, Meta Warrick Fuller, and Hale Woodruff.[3]

During the early ’30s, after failing to get published a book he had written, Dawson founded his own publishing company. In 1933 he published ABCs of Great Negroes, which he wrote and illustrated. The book contained twenty-six linoleum block prints of prominent black leaders, both male and female, with biographical sketches and portraits. Although some people had issues with the book, the Tennessee Board of Education selected it as one of the best children’s books on major figures in Black history.[4]

That same year, Dawson was invited to participate in the 1933 World’s Fair in Chicago, where he created a mural for the National Urban League’s exhibition.[5] His other contribution to the fair was a 1934 poster for the pageant called “O Sing a New Song,” a copy of which can be found in the collection of the Metropolitan Museum of Art in New York. Dawson’s mural and poster were some of the few pieces of Black representation in the fair that weren’t crude or racist stereotypes of Africans and African Americans.

Coinciding with his book and his work for the World’s Fair, Dawson also worked on illustrated advertisements for beauty schools and cosmetic products. As many Americans struggled through the Great Depression, Dawson was able to continue working through the employment of Valmor Products Company. There, he created numerous illustrations, which at the time allowed a glimpse into the realm of Black beauty. However, the company would not allow Dawson to sign his illustrations, and his work for Valmor would only get recognized years later, along with those of Jay Jackson—another illustrator who worked for the company after Dawson left.[6]

In 1940, after protests at the Chicago World’s Fair by numerous members in the Black community, the American Negro Exposition was held in the Chicago Coliseum.[7] Dawson helped direct the creation of multiple dioramas which provided a visual timeline of 7,000 years of African and African American history. The dioramas included events such as the building of the Sphinx, the discovery of iron and smelting in Central and West Africa, slavery and the Reconstruction era, as well as the heroism of black soldiers during World War I.[8] Dawson gave twenty of these dioramas to Tuskegee University which were later placed in their Legacy Museum. Unfortunately, out of the thirty-three dioramas that were created, only twenty of them were acquired by Dawson, while the location of the remaining thirteen is unknown. In the early ’40s, Dawson ended his career as an artist in the fine art world, and from 1944 to 1951, he took up a position as Curator at the Museum of Negro Art and Culture at Tuskegee University in Alabama.[9] In 1981, he died in Pennsylvania at the age of ninety-two.

As an artist, Dawson was influenced by Jean-Francois Millet, a French painter and co-founder of the Barbizon school in France. Dawson wanted to “paint as Millet did of the French peasants…the Negro in everyday life.” He was fixated on the struggle for identity within the Black community, and he spent a lot of time mirroring Black Americans in everyday life through sculptures, paintings, and illustrations. Due to his interest in Black identity, Dawson became one of the earliest illustrators in Chicago to introduce African imagery into his design projects.[10]

The Art Institute of Chicagohttps://www.illustrationhistory.org/illustrations/the-negro-in-art-week