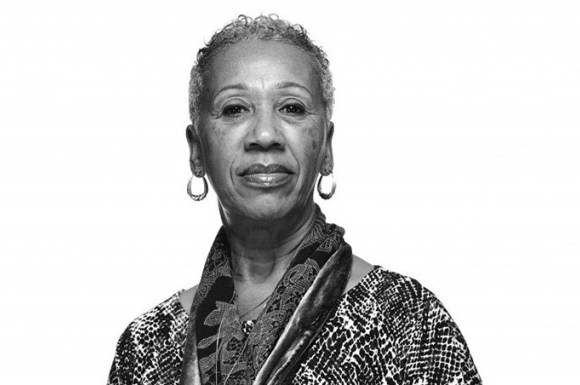 M. Gayle Dickson, also known as Asali, is a dedicated, community-spirited graphic artist, teacher, and ordained minister. During her late teens and early twenties, she worked for the Black Panther Party, where she was the only female graphic artist for The Black Panther, the Party newspaper, between 1972 and 1974.[1][2]

Dickson was born in Berkeley, California. Her father, James Stowers, owned a dry cleaning business; her mother, Madeline Stowers, was a seamstress. When she was two years old, Dickson moved to Oakland with her mother and siblings after her parents divorced. From an early age, Dickson demonstrated an ability for drawing, a skill that was recognized and nurtured throughout her education.

After attending Oakland Public Schools and graduating from Fremont High School in 1966, Dickson studied painting at Oakland’s Laney Community College. In 1967, she transferred to Merritt College, also in Oakland, which was a hub for black student protest and was where Black Panther Party co-founders, Huey Newton and Bobby Seale, met. While there, she joined the Black Student Union, became familiar with African cultural heritage, and participated in protests against police brutality.[3]

Dickson used her artistic talents to the betterment of the communities in which she lived and, for a time, to further the goals of the Black Panther Party. She joined the Party in 1970 after marrying Melvin Dickson and moving to Seattle. She did some sign painting for the Sydney Miller Free Health Clinic while in Seattle and became involved in other community programs. In 1972, both Dickson and her husband moved back to Oakland to work at the Black Panther Party headquarters. She worked in the graphic arts department until 1976; her art focused on women and children, capitalism, and urban poverty. Consulting with artist, author, and Black Panther Minister of Culture Emory Douglas, Dickson incorporated political and social commentary into her images.

While in Oakland, Dickson also worked for the Oakland Community School, teaching art classes, designing letterhead, and performing other administrative duties. She left the Black Panther Party in 1976 and worked in various positions over the next ten years. In 1986, she earned a Bachelor of Fine Arts degree from Holy Names University in Oakland, and accepted an office clerk position with the City of Berkeley two years later. Called to the ministry, Dickson enrolled at San Francisco Theological Seminary where she graduated with a Master of Divinity in 1998. She served as pastor of the South Berkeley Community Church from 1998 to 2006, using her art and preaching skills for the betterment of her faith community. She did this while holding a full-time position as Assistant Administrator for the Sister Thea Bowman Manor, Percy Abram, Jr. Senior Apartments.

Dickson retired in 2016. She currently resides in Richmond, California where she continues to paint and teach and is a popular public speaker.[4]

Bloom, Joshua and Waldo E. Martin. Black Against Empire: The History and Politics of the Black Panther Party. Berkeley: University of California Press, 2012.