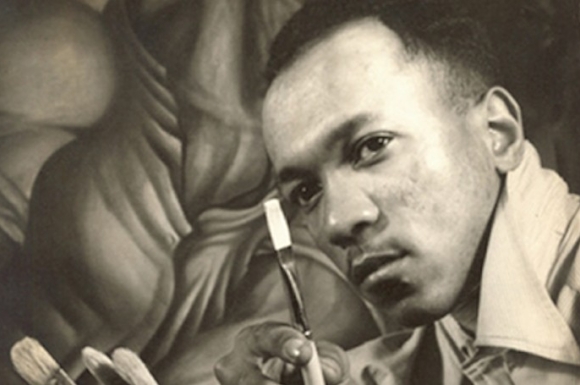 A skilled artist, Charles White was able to depict and communicate the struggle for equality for African Americans through his drawings, prints, and paintings. His work includes images of inspirational and powerful black figures in history such as Sojourner Truth, Harriett Tubman, and Frederick Douglass.

White was raised by his mother in Chicago, Illinois, and although his parents were not together, the family met regularly. His mother was a domestic worker who often dropped him off at the Chicago Public Library, or the Art Institute of Chicago while she worked. These two places would help White develop an interest in art and social justice, as well as an interest in artists of the Harlem Renaissance, and writers like W.E.B. Du Bois.

When White was in seventh grade, he was awarded a scholarship to take Saturday art classes at the Art Institute of Chicago, which he took until his junior year in high school. He attended numerous lectures and even participated and exhibited with the Arts Crafts Guild. One writer who inspired White, and sparked a sense of pride for black American history, was Alain Locke and his publication of The New Negro (1925). White’s passion brought upon by his reading sparked some trouble with his teachers. His beliefs clashed with the older, more Eurocentric views and curriculum that were being taught at the time.

He won multiple scholarships, but upon receiving them in person, they were rescinded, and he was told they were no longer available. It wasn’t until 1937 when he was accepted into the Art Institute of Chicago on a scholarship he had received.

The following year, White joined the Works Progress Administration (WPA) and worked as an easel painter, then in the mural division. One of White’s projects for the Federal Art Project, funded by the WPA, was creating Five Great American Negroes in 1939. His first public piece depicts Sojourner Truth, Booker T. Washington, Frederick Douglass, Marian Anderson, and George Washington Carver in vibrant oils on canvas. White tried leading people to recognize the contributions made by African Americans in U.S. history, and he held the belief that African Americans should have authority on the Black experience.

In 1941, White married the artist Elizabeth Catlett, and moved to New Orleans where they had teaching jobs at Dillard University. While in the south, White experienced firsthand the violence and humiliation of the Jim Crow era. The following year, they moved to New York City so White could attend the New York Art Students League on a fellowship. Through this fellowship, White created The Contribution of the Negro to Democracy in America in 1943 at Hampton University. The mural was part of a series at Hampton, which celebrated African American historical figures, and highlighted the struggle for equality by the black community. Much like White’s Five Great American Negroes, his mural for the university helped promote public knowledge and pride in African American history.

In 1944, White was drafted into the army where he served as corporal in the all-black 132nd Engineering Regiment. However, due to pre-existing health issues, he was discharged. In 1946, he and his wife traveled to Mexico where he worked at the Escuela Nacional de Pintura y Escultura, and the graphic arts collective, Taller de Gráfica Popular. Shortly after their return, the two divorced. White then married Frances Barrett, a social worker whom he met while working as a camp counselor.

White continued to raise awareness on the politics and struggles of the time through his art. He received numerous awards for his work, and in 1955, he received his first monograph, Ein Künstler Amerikas (An American Artist) by Sidney Finkelstein. The following year, he and his wife moved to California where they adopted two children, Jessica and Ian. Although he was not located near the hub of the Civil Rights movement, through his work he continued to comment on the violence and heroism of those who stood up against racism and discrimination. His work magnified the power of black figures through both scale and form, and his career flourished as he pushed at his own boundaries of which medium to use while also continuing to engage with the Civil Rights movement and the fight for equality.

From 1965 to 1979, he worked at Otis Art Institute where he served as the Chair of the Drawing Department. While at Otis, he became interested in wanted posters of runaway slaves in the United States, which he worked on through the use of the Tamarind fellowship in 1970. The year before his death, White went back to mural painting where he created Dr. Mary McLeod Bethune–Last Will and Testament for the Mary McLeod Bethune Public Library in Los Angeles, California. This would be White’s last major painting before he died in 1979 of congestive heart failure at the age of 61.