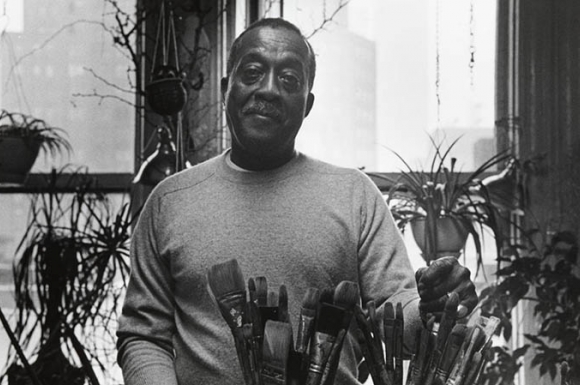 The abstract yet pointed paintings by Norman Lewis (1909-1979) were as influential in challenging the racial status quo of 20th century America as his social advocacy and leadership. Known as one of the few African American Abstract Expressionists and a leading art educator, Lewis’ aggressively creative agenda headlined the Harlem art scene.[1]

Lewis was born in Harlem to Bermudian immigrant parents. He began to study drawing and commercial design in high school before meeting one of his first artistic mentors, sculptor Augusta Savage. Lewis studied with Savage while also taking art courses at Columbia University.[1]

Lewis was hailed as a transformative teacher; groups of students would regularly follow him out of his classes and cluster around him to keep listening to his thoughts about art.[2] He began his long and decorated career as an educator by teaching at the Augusta Savage House and Studio.[3] Eventually, he began working to promote the careers of rising African artists with the 306 group, a Harlem salon of notable artists and writers which included Charles Alston, Aaron Douglas, and Ralph Ellison. In 1935, Lewis and some members of this group established the Harlem Artists Guild, which was instrumental in opening the Harlem Community Arts Center—where Lewis himself taught art courses.[1]

During this time, Lewis’ art turned to social realism. Inspired by jazz, African sculpture, and cubism, Lewis painted quotidian figures and scenes with the intent of revealing social truths.[1] His 1933 work, The Wanderer (Johnny), is an example. Head down and huddling over the small fire, the man is exposed to the harsh winter that is portrayed in the painting’s upper right-hand corner.[3] Lewis communicates a heaviness in this painting; the “wanderer” is hunched over, covered in snow. This weighty sensation might echo the glaring racial oppression of that time. But also, it relays the especially disadvantaged position African Americans had during the Great Depression, where their unemployment rate at times tripled the rate for white citizens.[4] Lewis powerfully manipulates space in this work, denying the viewer mobility and forcing them to face this social commentary head-on.

In the early 1940s, Lewis began teaching at the George Washington Carver School in Harlem, a school for local students who came from low-income family backgrounds.[1] He also joined the faculty at the Jefferson School for Social Science, a school for adults focusing on Marxist education; W.E.B. Dubois began offering classes there in 1952.[5] At this time, Lewis’ art began to divert from the sober aesthetic of his earlier realist paintings, moving toward abstraction. In Meeting Place (1941), one can see that Lewis does not totally drop representation, as he implies figuration—albeit in a stylized, unconventional way. [1]

Lewis was one of few well-known Black voices in this new artistic movement, inevitably challenging racial inequality in institutional American art. In 1950, he was the only African American artist that took part in the famous “Artist Sessions” at Studio 35 on New York’s East Eighth Street. It was in these meetings where Lewis—and artists such as Hans Hoffman, Robert Motherwell, Hedda Sterne, and Louise Bourgeois—coined the term “abstract expressionism” to describe their artistic style.[1][3]

As the semantics of “form” shifted in Lewis’ abstract expressionist work, his political messages remained clear, as observed in his 1967 work, Untitled (Alabama). Two shapes form what could be seen as an axe. Within these shapes are various erratic brushstrokes, some which may resemble Ku Klux Klan hoods. These shapes seem to harshly collide in a state of constant motion. The sharp edges of the “axe” juxtaposed against the black background might convey the racial tension within and the fractured composition of 1960s America.[3]

Social tension and violence also define Lewis’ Confrontation (1971). An interplay of blacks, reds, pinks, and yellows lead to a flaming portrait of a riot.[3] Certain figures can be discerned, but it is Lewis’ magnificent use of color and atmosphere which lends the work its dynamism.

Lewis did not slow down as an activist and educator in the later part of his career. In 1963, he both attended the March on Washington with other artists and founded Spiral, a collective of Black artists committed to using their work to advance the civil rights movement.[5] From 1965 through 1971, Lewis continued his commitment to social justice as an art teacher at Harlem Youth in Action, an organization working against poverty. With the help of artists Ernest Crichlow and Romare Bearden, Lewis continued to push forward an African American presence in contemporary art by establishing the Cinque Gallery in 1969, a gallery devoted to exhibiting new Black artists. He then went on to teach at New York’s Art Students League from 1972 to 1979. During that time, he was awarded a Mark Rothko grant (1972), a National Endowment for the Arts fellowship (1972), and a Guggenheim fellowship (1975).[1]