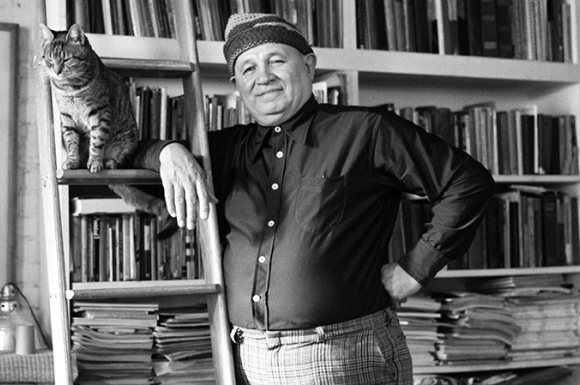 One of America’s foremost painters and collagists, Romare Bearden was an innovator who melded childhood memories, personal observations, and biblical and art historical themes to create visual narratives inspired by African American history and his own lived experience. Born in North Carolina, he attended New York University where he was editor and cartoonists for the school’s monthly journal.

His early artistic work focused on scenes of the American South, but after his service on the European front during World War II, Bearden returned to Paris, in 1950. There, he studied art, literature, and philosophy at the Sorbonne and explored the myths and rituals that bind humanity—the basis for his Prevalence of Ritual series. Seeking connections “so that my paintings can’t only be what they appear to represent,” Bearden sought to relate “people in a baptism in a Virginia stream…to John the Baptist, to ancient purification, and to their African heritage. I feel that this continuation of ritual gives a dimension to the works so that the works are something other than mere designs.”

Gilmore, Glenda Elizabeth. Romare Bearden in the Homeland of his Imagination: An Artist’s Reckoning with the South. Chapel Hill: University of North Carolina Press, 2022.

Hartfield, Claire and Jerome Lagarrigue. Me and Uncle Romie: A Story Inspired by the Life and Art of Romare Bearden. New York: Dial Books for Young Readers, 2002.