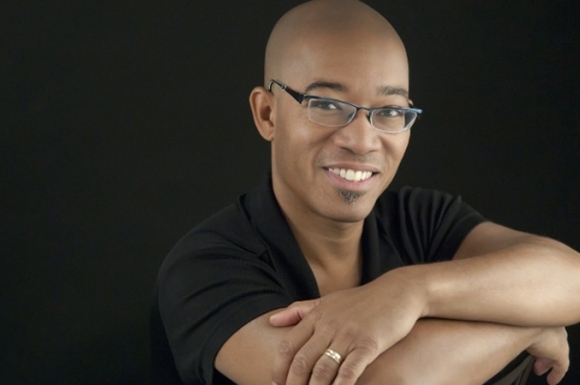 Brian Pinkney (b.1961) is a prolific award-winning American illustrator of acclaimed books for children. In addition to working with other authors, he and his wife, children’s book author Andrea Davis Pinkney, have collaborated on baby board books, biography picture books, and narrative non-fiction books for older kids, selecting subjects that enable them to share little known facets of African American history and culture with young readers.[1] Between them, they have published more than seventy children’s books that have received the highest awards and accolades.[2]

Pinkney was born in Boston, Massachusetts, into an artistic family. His father, Jerry Pinkney, was an illustrator and his mother, Gloria Jean Pinkney, was a children’s book author. He grew up with two brothers and a sister who all played musical instruments, but were also interested in drawing, painting, and building things. Their mother instilled in all of them a love of reading.[3] Pinkney was fascinated by his father’s work and developed a passion for illustration at an early age.

After graduating from high school, Pinkney enrolled at the Philadelphia College of Art and earned his bachelor’s degree in fine arts in 1983. In college he was exposed to different artistic mediums—pen and ink, watercolors (his father’s preferred medium), oils, and acrylics. However, printmaking became one of Pinkney’s favorite courses of study because he enjoyed the three-dimensional aspects of etching and lithography techniques. He began experimenting with “scratchboard” techniques, similar to engraving, where the artist uses small tools to scrape away the surface of a prepared board’s black coating to reveal the white clay underneath, then adding oil paint when color was desired. This scratchboard technique became a favorite for Pinkney’s illustrations.[4] He went on to earn his Master of Fine Arts degree in illustration from New York City’s School of Visual Arts in 1990.[5]

Initially undertaking freelance illustration assignments from other authors, Pinkney wrote his first self-illustrated work, Max Found Two Sticks, in 1994. Derived from his personal experience playing the drums, the book was lauded by critics. Other works based on Pinkney’s personal experiences were to follow.[6] Pinkney and his wife, Andrea Davis Pinkney, met while they were both employed by the same magazine—she as an editor and he as an illustrator. The marriage is also a successful career collaboration, cultivating the creativity which produced several critically-acclaimed titles including Sukey and the Mermaid (1992), Duke Ellington: The Piano Prince and His Orchestra (1998), The Faithful Friend (1995), The Adventures of Sparrowboy (1997), and In the Time of the Drums (1999).[7]

Pinkney’s illustrations have been exhibited at The Art Institute of Chicago, Cedar Rapids Museum of Art, The Detroit Institute of Art, The Cleveland Museum of Art, The School of Visual Arts, and The Society of Illustrators.[8] Some of Pinkney’s many awards include two Caldecott Honors, four Coretta Scott King Honors, a Coretta Scott King Award, and the Boston Globe Horn Book Award. He currently lives with his wife and two children in Brooklyn, New York.[9]