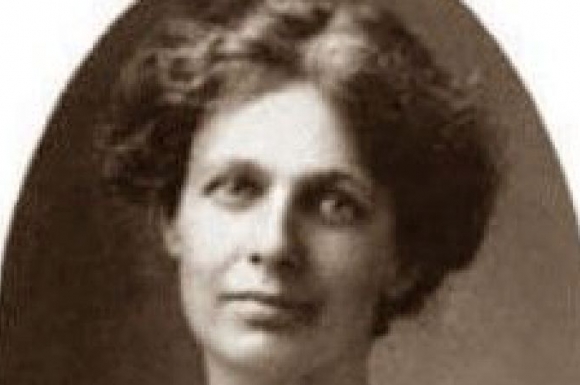 Maginel Wright Enright Barney was born Margaret Ellen Wright on June 19, 1881 (the name “Maginel” derived from “Maggie-Nell,” as she was called by her family). She was the youngest sibling of architect Frank Lloyd Wright (1867-1959), who was fourteen years her senior. Originally from Weymouth, Massachusetts, she moved with her mother to Chicago to be closer to her brother as he established his architectural career. Living in Chicago, Maginel was able to attend the School of the Art Institute of Chicago from 1897 to 1898. This training allowed her to secure a position at the Chicago engraving firm of Barnes, Crosby, and Co., where she worked for three years. During her schooling at the Art Institute, Maginel also likely met her first husband, fellow artist Walter Enright, whom she married in 1904.[1]

In 1907, Maginel’s daughter, Elizabeth Enright, was born. Shortly thereafter, the family moved to New York City, where Maginel and Walter sought to further their artistic careers. During this time, Elizabeth often served as a model for her mother’s works. Her recollections illuminate her mother’s artistic process:

I can see her now as I saw her then, her drawing board tilted against the worktable before her. In her dark curly hair two or three pencils were stabbed like geisha ornaments, and a watercolor brush was often gripped between her teeth. Another, the one she was using at the moment, was in her fingers. Almost always there would be an aboriginal stripe of paint or ink across her cheek, and her whole attitude as she applied the brush—then leaned away from the picture and bent her head from side to side, narrowing her eyes at it, then leaned forward again––was the attitude of an artist at work; alone, concentrated, for the moment wholly self-sufficient.[2]

Her daughter’s description shows Maginel as a focused and hardworking illustrator. These qualities contributed to her sizable artistic output. In addition to illustrating over sixty books, she produced cover illustrations for magazines and created patriotic posters during World War I. She is known to have been “largely responsible for revolutionizing the quality of illustrations in children’s readers.”[3] Her illustrations appear in editions of such classic children’s books as Heidi and Hans Brinker, or the Silver Skates. Moreover, she painted cover designs and illustrations for numerous magazines, including Woman’s Home Companion, Ladies’ Home Journal, and McClure’s Magazine.

After her marriage to Walter Enright ended in divorce, Maginel married Hiram Barney. Though she primarily worked under the name “Maginel Wright Enright,” several of her works are signed as Maginel Wright Barney. It was under this name that she published a memoir, The Valley of the God-Almighty Joneses, in 1965. This memoir focuses on her mother’s family and her relationship with her brother, Frank Lloyd Wright. Maginel died in East Hampton, New York one year after the publication of her memoir.

This artist’s biography was written by Anastasia O’Neill, project archivist at the Norman Rockwell Museum. She earned her Master of Science degree from University of Albany, SUNY, with a focus on Information Science, Archives, and Records Administration.