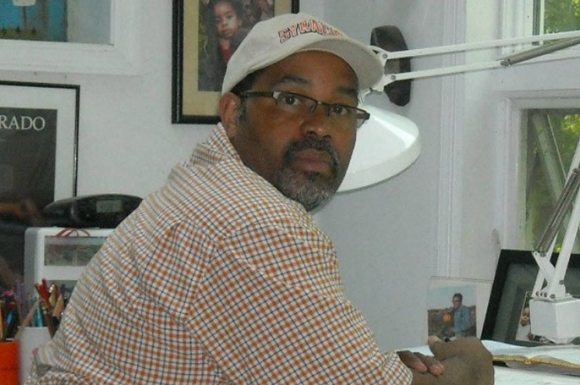 James E. Ransome (b.1961) is an American illustrator who is well-known for his children’s books focusing on African American figures in history, politics, sports, and the arts. He and his author wife, Lesa Cline Ransome, have collaborated on several books together. Ransome has also illustrated greeting cards, magazines, and murals, and serves as an associate professor in the School of Art at Syracuse University.[1] Acclaimed by the Children’s Book Council as one of the seventy-five authors and illustrators everyone should know, Ransome, after earning a Master of Fine Arts degree at age sixty, is developing a parallel career as a painter.[2]

Born in rural Rich Square, North Carolina, Ransome was raised by his grandmother who often asked him to read to her from the Bible. The dramatic Bible illustrations sparked his imagination and, along with hot rod cars from pages of comic books, Bible scenes were the first images he tried to illustrate. While there were no art galleries or museums where he was raised, and his school didn’t offer any art classes, Ransome pursued his interest in art through a correspondence course he found on the back of a comic book. He was also impressed by images he saw on television and developed an interest in filmmaking.[3]

It wasn’t until he moved to New Jersey after his freshman year in high school, that Ransome was able to develop his talents by taking filmmaking and photography classes at nearby Bergenfield High School. At the suggestion of his high school filmmaking teacher, Ransome turned his attention back to drawing and enrolled in a drawing and painting class. He went on to earn a Bachelor of Fine Arts degree from Pratt Institute in Brooklyn, New York. The artists who have had a major influence on Ransome’s style of painting include Winslow Homer, Edgar Degas, and Joaquin Sorolla. One of his Pratt teachers, African American illustrator Jerry Pinkney, became his mentor and friend.[4]

When he illustrates, Ransome likes to listen to jazz. He also likes to combine his paintings and drawings with bits of paper, collaging the images. His mentor, artist Jerry Pinkney, points out a certain characteristic found in Ransome’s illustrations: “You could see his brushstrokes, his painterly quality, his focus on story. He approached his illustration as a painter would approach a canvas.”[5]

Cline-Ransome, Lesa and James Ransome. Before She Was Harriet. New York: Holiday House, 2017.

Ransome, James. A Joyful Christmas: A Treasury of New and Classic Songs, Poems, and Stories for the Holiday. New York: Henry Holt, 2010.