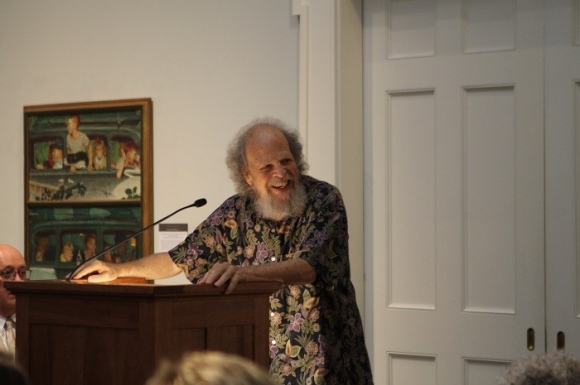 Dennis Nolan was born in San Francisco, California to Helen Fortier Nolan and Arthur Nolan. He attended San Jose State University where he got his BA in Painting and Art History, and his MA in Painting. Nolan started out his career by illustrating posters for bands like The Grateful Dead and Big Brother and the Holding Company.[1] He also took jobs where he painted for galleries, animated films, and illustrated textbooks.[2] His first illustrated book, Big Pig, was published in 1976. After illustrating some of his own books, he began illustrating for other writers. In 1979, he illustrated Charles Keller’s Llama Beans, a book with jokes, riddles, and puns about animals.[3]

In 1986, Nolan started teaching at the University of Hartford as a Professor of Illustration for undergraduates using a curriculum he wrote for the school’s newly formed illustration program. With a brief break between 1992 and 2001, he continued to teach at the University of Hartford until his death in 2022. Nolan was known for his kindness, wisdom, wit, and generosity. He was an inspiration to his students, and always knew the right words to say in order to give them new perspectives which they could carry into their future and careers.[4] Bill Thomson, a Professor of Illustration and the Chair of Visual Communication Design at the Hartford Art School, described Nolan as giving so much of himself to his students: “He not only taught our students to develop their artistic skills and knowledge, but how to be better and more caring people.”[5] In his obituary, Nolan was described as being a giving and selfless person.

His career and work earned him numerous awards and recognition. In 1991, he earned The Society of Children's Book Writers and Illustrators (SCBWI) Golden Kite Honor Award for his book, Dinosaur Dream, which follows a young child who finds a baby apatosaurus whom he must return to the late Jurassic period. Other awards and honors include the French Prix de Zephir award for the 1987 book, The Castle Builder, and the SCBWI Golden Kite Award for Best Illustrated Book of the Year for Fairy Wings (1995), on which he collaborated with his wife, Lauren Mills, an author, illustrator, sculptor, and painter.

Nolan has illustrated over thirty picture books, ten of which he authored. Some of those books delve into childhood imagination like The Castle Builder, Dinosaur Dream (1990), and Shadow of the Dinosaurs (2001). He also worked on numerous projects with his wife.

In 2018, Nolan worked as Guest Curator at the Norman Rockwell Museum in Stockbridge, Massachusetts for the exhibition Keepers of the Flame: Parrish, Wyeth, Rockwell and the Narrative Tradition, which he conceived and helped organize. Along with the exhibition, he also wrote an extensive catalogue. Both projects brought light to Nolan’s thesis on the connection between American illustration and European painting through the lineage of teachers and students.

Unfortunately, Nolan was diagnosed with Mantle Cell Lymphoma and died on August 16, 2022. Just prior to his death, he wrote to his students on the importance of loving oneself and the moment in order to achieve a sense of fulfillment. Nolan taught for thirty years at the Hartford Art School and later retired to Ashfield, Massachusetts where he spent his last three years.[6]

Jeremiah Patterson, Professor of Foundation at the Hartford Art School, said of Nolan, “He paired his vast knowledge of art history and visual expression with the intellect of his spirit, and that made his lessons last well beyond the classroom… His legacy will continue to burn brightly in each and every one of his students and peers.”[7]