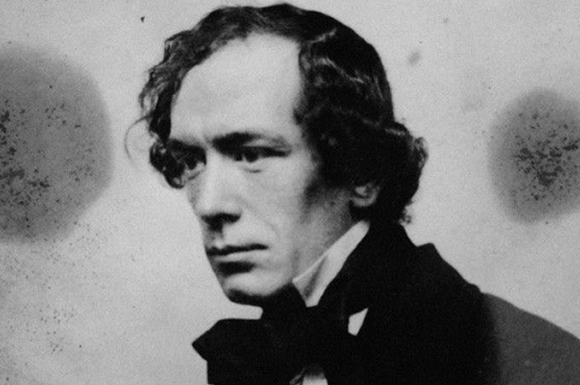 Richard ‘Dicky’ Doyle was born in London to a wealthy Catholic family. Richard Doyle’s father, John Doyle, was a well-known political cartoonist who anonymously published his caricatures under the pen-name “HB.” Doyle and his siblings were trained from childhood in the principles of respectability by their regimented father who requested that his children refer to him as “the Guv’nor” or “Lord John.” John Doyle was a self-made man who insisted that his sons and daughters be trained in the genteel arts of fencing, dancing, music, and literature, while also providing them with his own rigorous brand of arts training. Richard Doyle’s artistic tutelage was almost exclusively from his father who insisted Richard learn to draw from memory, a skill that required him to practice daily by drawing the busy streets of central London, and by emulating his favorite artist, Horace Vernet. Richard’s ambitious goal of becoming a history painter spurred him to watch military demonstrations so that he could study horses and groupings for his painting compositions. During the time he spent amongst the crowds of spectators, he became enamored with the faces of the people watching the demonstrations, and began to listen to their conversations. Having spent the majority of his time around wealthy aristocrats in a sheltered world, Richard became fascinated by the Dickensian world he was now exposed to. Rather than depicting the “lower classes” in a condescending way, Richard’s observations of the crowds showed his intrigue and interest in their lives, which is unsurprising since they differed so greatly from his upbringing.

Richard Doyle’s mother had died following the birth of his brother, after which their home was run primarily by his father, John. At some point in Richard’s childhood, his mother’s brother, Michael Conan, and his wife moved into the Doyle home and helped to raise Richard and his siblings. The couple helped to lighten the mood of the household and expanded Richard’s artistic horizons. An arts critic, Michael Conan took the Doyle children to concerts, the ballet, and the opera, and taught them to think critically about art. After being raised to produce art without much enjoyment of the practice, Conan helped the Doyle children to take pleasure in art and appreciate it, an important lesson for young artists to learn. From an early age, Richard had a vivid imagination and took inspiration for his art from folk legends, historical readings, and fantasy tales, especially those by Sir Walter Scott and Thomas Keightley. Conan’s guided trips to London arts institutions influenced Richard’s love of galleries and the theatre. He loved Shakespeare and spent a great deal of time studying Richard Dadd, Nicolas Poussin, and the Old Masters, as well as illustrations by George Cruikshank, Daniel Maclise, and J.J. Grandville.

In 1843, Richard Doyle joined the staff of Punch where he did odd jobs and made occasional contributions to the magazine. It took seven years, but Doyle eventually established himself as a major comic artist, making important contributions to Punch. Dicky’s ‘Nonsense Style’ was appreciated by the editors for its whimsical character, and he was given numerous opportunities to express his creativity through the fantastical drawings he had created during his childhood. In addition to the weekly fantasy engraving he had begun designing, he also joined John Leech on the weekly full page political cartoon and shared the design with him. Most notably, Dicky designed the cover illustration for Punch’s sixth issue in 1844, which continued to be used until 1954. The design for the famous cover was based on Titian’s Bacchus and Ariadne, which he had probably viewed at the National Gallery in London. Dicky worked with some of the most talented and influential artists of the time, making friends with Punch’s editor, Mark Lemon, William Makepeace Thackeray (whom became Dicky’s close friend until his death), journalist Douglas Jerrold, and even Charles Dickens.

In the mid-1840s, Dicky worked with fellow Punch illustrator, John Leech, W.C. Stanfield, and other artists on illustrations for three of Charles Dickens’s Christmas books: The Chimes (1844), The Cricket on the Hearth (1845), and The Battle of Life (1846). While at Punch, Dicky experienced his first triumph in comic illustration with his series “The Manners and Customs of Ye Englyshe” from 1849, which accompanied extracts from Percival Leigh’s fictitious “Mr. Pips Hys Diary” accounts of London society. A second series was commissioned after the immense popularity of the first, this time without Percival Leigh’s text. Doyle’s second series for Punch was just as successful, inspired by his foray into society due to his newfound fame. "Brown, Jones, and Robinson" was a series of comics inspired by the foibles that took place as Dicky and his brothers tried to break into London society. The success of the series prompted Dicky to later write a travelogue of his journey to Europe with two of his coworkers (the models for Jones and Robinson) though it was published in 1854, four years after Dicky left Punch.

Although he enjoyed his seven years at Punch and was highly respected by his colleagues, Dicky Doyle left the magazine in November 1850. By 1849, Douglas Jerrold’s articles and John Leech’s cartoons continually attacked the Catholic church as feelings of ‘papal aggression’ took hold in England. Punch helped to fan the flames of dissent amongst its staff and its readers causing Dicky to resign his position. When staff at Punch tried to dissuade Dicky from leaving by stating that the staff at “The Times” was enduring the same situation, Dicky responded, “That is all very well in the “Times,” but not in Punch. For the “Times” is a monarchy, whereas Punch is a republic.”[1] Though Doyle received many offers from national periodicals, he never again accepted work for another paper of Punch’s stature.

Dicky Doyle’s post-Punch career was primarily focused on book illustration. In 1850, he illustrated John Ruskin’s The King of the Golden River, and his good friend W.M. Thackeray frequently commissioned him to illustrate his work. At this point in his life, in his mid-twenties, Dicky’s tendency to procrastinate and waver in his dedication to work became a problem. Without regular deadlines and constant movement between magazine issues, it seems Dicky had trouble completing commissions and book illustrations, to the point where publishers would disregard the end of a series. In 1865, when working with J.R. Planché on An Old Fairy Tale Told Anew in Pictures and Verse, Dicky showed the Dalziel Brothers a series of drawings he had made for Sleeping Beauty. The frontispiece and vignettes were great examples of Doyle’s work, however he never finished the illustrations for the end of the book leaving the reader “in the air, for Doyle’s fecklessness betrayed him into forgetting to depict the denouement.”[2]

Though he continued to receive commissions, Doyle always seemed to find something else that needed his attention more than his work. He dedicated a lot of time to helping his family and also began planning a daunting schedule of social engagements. As a result of his busy personal schedule, his work and his professional reputation began to suffer. Over the years, Dicky continued to complete book commissions sporadically and painted watercolors for galleries in London. Doyle’s illustrations for W.M. Thackeray’s “Bird’s Eye Views of Society” (1864) were enjoyed by many as his abundance of social engagements in London society allowed him to create accurate and detailed caricatures of the elaborate interiors and expensively dressed socialites. “Bitterness was the overall theme of these drawings though Doyle still had the ability to sugarcoat his criticism as the characters and interiors are filled with intricate and amusing detail.”[3] Doyle’s ability to enter the world of London society as an observer or, a “fly on the wall,” and watch the partygoers from a doorway worked to his advantage in this commission as these drawings are considered some of his best social satires.

Dicky Doyle, though successful in his caricatures and cartoons, is often remembered as a fairy-tale illustrator from the many fantasy books he illustrated throughout his career. He made a name for himself in 1846 with The Fairy Ring, a new translation from The Brothers Grimm fairy tales. This volume was very well received, with connections being made between Doyle’s drawings and those of George Cruikshank. Doyle’s unique fantasy style was appropriate for fairy tales, and he received many more commissions for fairy stories over the following years. In 1870, In Fairyland was released to immense praise, and is still remembered as Doyle’s masterpiece. The book features sixteen color plates and thirty-six line illustrations on which Dicky was given free reign to create the illustrations as he pleased. The Fairy Tree is one of Dicky’s most ambitious watercolors and also one of his most celebrated, with 200 figures perched on branches and the fairy king in the center of the composition. In Fairyland was printed by Edmund Evans, who worked with some of the most successful illustrators of the Victorian era. “The whole volume, which shows Doyle’s secret fairy world at its most enchanting, is one of the finest examples of Victorian book production.”[4]

Though Doyle had great success with In Fairyland, this was arguably the beginning of the end of his illustration career. The majority of Doyle’s work from this point on was watercolor painting, which appeared at the Royal Academy and the Grosvenor Gallery. Doyle traveled throughout Great Britain to paint landscapes, many of them from the point of view of his friends’ country homes. His later work from the late 1870s and early 1880s was more erratic and was primarily purchased by his wealthy friends. On December 11, 1883, Dicky Doyle died, and was remembered by his former colleagues at Punch in a poem:

Turning o'er his own past pages,

Punch, with tearful smile, can trace

Feats and freaks of Cockney funny—

Brown, and Jones, and Robinson;

And, huge hive of Humour's honey,

With old memories of our youth,