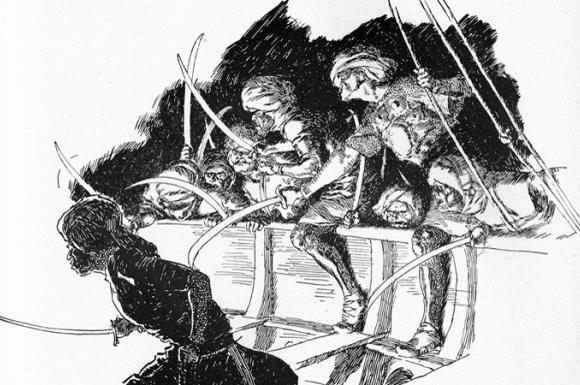 Harold Robert “H.R.” Millar was born in Thornhill, Dumfriesshire, Scotland on February 6, 1869. He began his studies at the Wolverhampton School of Art, and then later moved to the Birmingham Municipal School of Art. In 1891, at the age of 22 he began working for The Strand magazine, a publication founded the same year. Not long after beginning his artistic career with The Strand, Millar was recognized as their most talented illustrator of children’s stories, and offered opportunities to illustrate for other popular magazines of the day such as, Punch, Scraps, Fun, Little Folks, Chatterbox, Chums, and The Girl’s Own Paper. While working for The Strand, he primarily illustrated fables and fairy tales like Alexandre Dumas’s “The Enchanted Whistle” (May 1891) and Henryk Sienkiewicz’s “Janko Muzykant” (“Janko the Musician,” June 1891). He also created drawings for European authors such as Voltaire, Jokai, George Sand, and Sarah Bernhardt, whose stories were often unfamiliar to the general public, or were new translations of old tales. The drawings Millar created for The Strand were preserved in four volumes entitled The Golden Fairy Book (1894), The Silver Fairy Book (1895), The Diamond Fairy Book (1897), and The Ruby Fairy Book (1898). While known for his drawings of fairies and fantastical creatures, Millar was also inspired by Eastern art, of which he was an avid collector, as can be seen in The Enchanted Castle and Celtic Myth and Legend.

Millar’s work with Edith Nesbit, beginning in 1899, produced some of his best-known illustrations to accompany her popular books. The long-running creative partnership began with Millar’s illustrations for her tale The Seven Dragons, which appeared in The Strand in 1899. This tale was reissued as a book, titled The Book of Dragons, the following year (1900) due to its popularity. Millar continued to illustrate most of Nesbit’s stories for The Strand in delicate black and white drawings through 1913. These stories include Nine Unlikely Tales for Children (1901), Five Children and It (1902), The Phoenix and the Carpet (1904), Oswald Bastable and Others (1905, with H.M. Brock), The Story of the Amulet (1906), The Enchanted Castle (1907), The House of Arden (1908), Harding’s Luck (1909), The Magic City (1910), The Wonderful Garden (1911), The Magic World (1912, with Spencer Pryse), and Wet Magic (1913). Most of Nesbit’s beloved characters, such as the Phoenix, the Psammead, the Mouldiwarp, and the Ugly-Wuglies were illustrated in perfect detail by Millar. Doris Langley Moore, Nesbit’s biographer states that Nesbit was so pleased with Millar’s rendering of her ideas, that she believed there must be a “telepathic bond” between them. “There will be few ready to dispute H.R. Millar’s pre-eminence as the interpreter of her invention. He fulfilled to something near perfection the exacting demands she made upon him.”[1]

During the time that Millar worked with Nesbit, he was also illustrating other stories for The Strand. F. Anstey’s The Brass Bottle (Feb.-Sept. 1900), Post Wheeler’s Stories for Children (Dec. 1911-Sept. 1912), and several fairy tales for W.J.L. Kiehl (1913-1917) were among those illustrated for The Strand, though he also worked continuously for other popular magazines like Punch. In addition to his drawings for magazines and periodicals, Millar also illustrated many children’s books from the late-19th century through nearly to the mid-20th century. These titles include: Fairy Tales Far and Near retold by Q (Sir Arthur Quiller-Couch, 1895), Mrs. Molesworth’s The Wood Pigeons and Mary (1901) and Peterkin (1902), F. Anstey’s Only Toys! (1903), Marie Corelli’s The Strange Visitation of Josiah McNason (1904), Rudyard Kipling’s Puck of Pook’s Hill (1906) and Rewards and Fairies (1910), Tetta Ward’s My Fairy Tale Book (1919), Robert Louis Stevenson’s The Merry Men (1928) and New Arabian Nights (1928), Edith Walker’s Joyous Stories (1935), A.S.K. Davis’s Isle of Adventure (1937), and Geoffrey Mure’s The Boots and Josephine (1939). Millar also contributed a comic called “Jungle Land” to The Sunday Fairy, a comic publication launched on May 10, 1919 by the Amalgamated Press.[2]

H.R. Millar died in Surrey on December 20, 1942. Though he had been a popular illustrator throughout his life, his death went largely unnoticed by both the press and his fans.