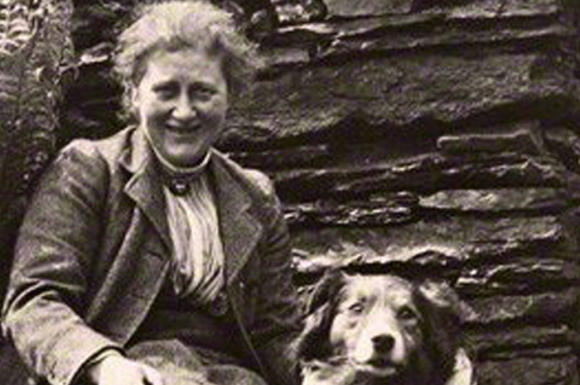 Helen Beatrix Potter was born on July 28, 1866 to Rupert and Helen Potter in Kensington, London. Beatrix’s parents were bourgeois Victorians who lived on inheritances from their families’ cotton trade during the industrial era. Rupert was a qualified barrister, though rather than practice law, he spent his time focusing on his passion for art and photography. An embroiderer and watercolorist, Helen joined him in an active social life, filled with writers, artists, and politicians, among them Sir John Everett Millais. From a young age, Beatrix and her brother Bertram Potter (born in 1872), showed promise as artists, constantly sketching animals from their classroom menagerie. Taught by governesses, including Annie Moore (who remained a close friend of Beatrix), in their home classroom, the children kept a multitude of pets for study, even smuggling in hedgehogs, mice, and frogs from the garden. This love of animals continued to grow as the Potters traveled north every summer, first to Perthshire in Scotland, and later to the Lake District in Cumbria, England. The Lake District, in particular, became an integral part of Beatrix’s life, and she later drew great inspiration from the area for her art. During their summers in the north, Beatrix spent time observing and sketching plants, animals, and insects with a detailed eye. Though she did sit her Second Grade Art Student certificate at the National Art Training School in South Kensington, her education was largely neglected, as was common with Victorian women. Instead, Beatrix copied from books and drawing manuals and studied the works of John Constable, Thomas Gainsborough, and J.M.W. Turner. Ultimately, Beatrix was grateful that she was primarily self-taught, because she said had she been formally educated “it would have rubbed off some of the originality.”1

As Beatrix grew older, she became a talented naturalist. With Bertram sent away to school, she spent her time alone learning to drawing with her eye to a microscope, and eventually developed an interest in fungi. Invited to study fungi by the Royal Botanical Gardens in Kew, she produced hundreds of detailed botanical drawings and investigated fungi’s cultivation and growth. Charles Macintosh, a Scottish naturalist she knew from her summers in Perthshire, encouraged her to work towards making her drawings more technically accurate. This prompted Beatrix to begin using watercolors in her drawings, which eventually led to her becoming an adept scientific illustrator. Though she continued her research on fungi until the late 1890s, a paper she wrote entitled “On the Germination of the Spores of Agaricineae” (gilled fungi) was rejected by The Linnean Society (the world’s oldest extant biological society) when it was presented in 1897 on her behalf by the Assistant Director of the Royal Botanical Gardens at Kew. Whether due to her research and theories, or to her being a woman, this rejection most likely contributed to Beatrix’s decision to devote her time solely to drawing and painting, which had already begun to earn her a modest income.

Beatrix’s illustration career started from humble beginnings, with drawings of some of her favorite stories. She illustrated her own versions of Alice’s Adventures in Wonderland and Cinderella, and as always, avidly drew from nature. These works led to her first publishing opportunity with Hildesheimer & Faulkner in 1890, when her art was utilized for greeting card designs and book illustrations. A series of frog illustrations and contributions to Changing Pictures, an annual with art publisher Ernest Nister, soon followed which bolstered Beatrix’s ambition to publish her own illustrated stories.

In September 1893, Beatrix wrote an illustrated letter to her former governess, Annie Moore’s son, Noël about a rabbit named Peter. Beatrix had gathered a great deal of inspiration from her two pet rabbits, the first being Benjamin Bouncer, and the second, Peter Piper. This letter written to Noël told the story of Peter Rabbit and his family, as well as his misadventure in Mr. McGregor’s garden. Years later in 1900, Beatrix asked to borrow the letter from Noël so that she could copy the illustrations for her first published work, The Tale of Peter Rabbit. In 1901, after being rejected by six publishers, Beatrix decided to publish Peter Rabbit on her own. She printed an initial run of 250 copies in December and gave them to friends and family. Her book was instantly successful, and a copy made its way back to Frederick Warne & Co., prompting them to reconsider their decision and offer to publish her work. Norman, the youngest of the Warne brothers, took over Beatrix’s account, his only stipulation being that Beatrix re-illustrate Peter Rabbit  in color before they publish the story. When the book was released to the public in October 1902 it was an instant bestseller, and Frederick Warne & Co. had to produce six editions within the year in order to meet demand.

After Beatrix’s initial success with Peter Rabbit, she went on to publish many more stories with Frederick Warne & Co. In 1903, The Tale of Squirrel Nutkin and The Tailor of Gloucester were published and, with continued ambition, she designed and sewed the first Peter Rabbit doll for Norman Warne’s niece. Realizing the opportunity for merchandising, Beatrix immediately registered her designs at the patent office, making Peter Rabbit the world’s oldest licensed literary character. Two years later, in 1905, Norman Warne sent Beatrix a proposal of marriage, which her parents met with severe opposition. Despite her parents chagrin at Norman’s occupation “in trade,” Beatrix accepted his proposal, only to experience the devastation of his death from leukemia less than a month later. Beatrix dealt with her loss by taking solace in the Lake District, one of her favorite places since childhood. She purchased Hill Top Farm in Sawrey less than a year after Norman’s death, and began learning how to run a farm.

Though Beatrix was unable to live at Hill Top Farm full time, because as a widowed Victorian woman she was expected to take care of her aging parents in London, she did continue to invest in the Lake District and make it her permanent home. She continued to write and produce one or two “little books” a year for the next eight years, but progressively spent more time working on her farm. As time passed she purchased more land in the Lake District, eventually meeting William Heelis, a local solicitor in 1909 when she was purchasing property next to Hill Top Farm. After four years of courting, William Heelis and Beatrix Potter were married in 1913, again, despite the objections of her parents. Beatrix was able to settle in the Lake District full time after she and Heelis married, which meant that she could devote more time to her farming, eventually becoming an expert breeder in Herdwicks, an indigenous Cumbrian sheep. Her devotion to farming paired with failing eyesight meant that Beatrix spent less time creating new artwork. By 1920 her eyesight had become so deteriorated that Beatrix was forced to re-work old sketches and drawings into her new books. This practice took a great deal of time, and combined with her duties on the farm, resulted in her publishing only two more books before her death. Beatrix’s last major work, The Tale of Little Pig Robinson, was published in 1930 and she died in 1943. Throughout her career, Beatrix Potter wrote and illustrated twenty-eight books that have since been translated into more than thirty-five languages. Since the original publication of The Tales of Peter Rabbit  in 1902, over 100 million copies of her stories have been sold. Beatrix had acquired fourteen farms and over 4,000 acres of farmland in the Lake District during the later years of her life which she bequeathed to the National Trust, a conservation organization in the United Kingdom. Hill Top Farm has since become a museum, which,  according to her wishes, was left exactly as it had been when she lived there.

Bland, David. A History of Book Illustration: The Illuminated Manuscript and the Printed Book. Cleveland, OH: The World Publishing Company, 1958.