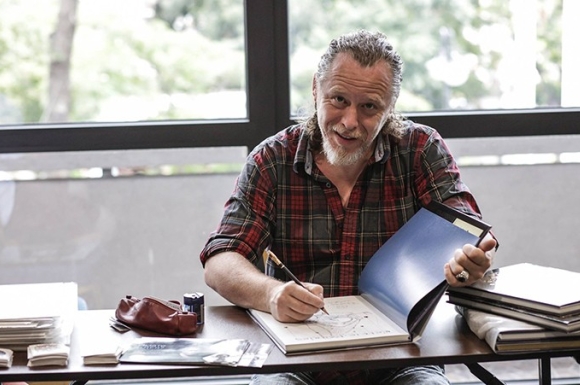 Jean-Baptiste Monge’s fantasy subjects range from the serious to the comical. His illustrations of kindly elves dressed in business attire is in stark contrast to the terrifying dragon in his painting of the world-ending Ragnarok. Monge produces his works in many media—oil, watercolor, digital, and others—and has illustrated numerous books, created concept art for video games, and self-published his own art books, including Celtic Faeries: The Secret Kingdom, which he published under his own label, Goblin's Way, in 2016.

Monge, born in France, follows in the footsteps of illustration pioneers such as Arthur Rackham, Howard Pyle, J.C. Leyendecker, and Norman Rockwell as he creates new worlds filled with fairies, fantasy, and wonder. In an homage to Norman Rockwell’s 1926 Saturday Evening Post cover titled Boy and Girl Gazing at Moon (Puppy Love), Monge created The Kensington Lovers as an interior illustration for his 2007 book, Celtic Faeries. Another work depicts Norman Rockwell as an elf sitting on an ink bottle, drawing his latest miniature masterpiece. Rockwell's trademark pipe is tucked behind his ear.

His artworks regularly appear in art journals and books, such as the annual Spectrum volume, which showcases each year's finest works in the field of fantasy art. Monge has created artwork for Disney, Universal Studios, Blizzard Entertainment, Sony Animation, and L'Atelier Animation, in addition to his own publishing house, Goblin's Way.