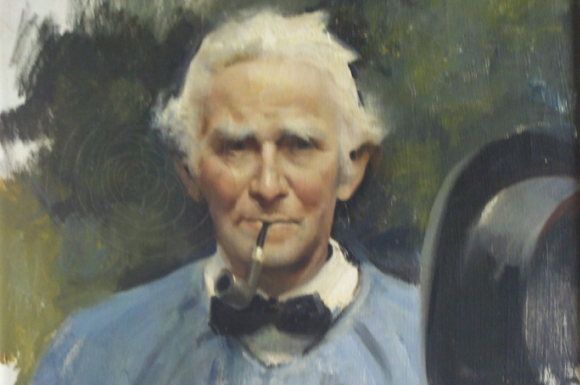 A successful illustrator, advertising designer, and author in the first half of the 20th century, Andrew Loomis (1892-1959) was a master at seamlessly combining products and fine art into one cohesive image.

Loomis possessed an acute ability to bring focus to the product while maintaining the appearance of fine art. He captured moments of idealized American values in softly painted figures and scenarios that were suggested in the advertisements of the products he was promoting, such as in his ads for Kellogg’s with Boy Scouts ready to aid the public after eating cereal, or beautiful women enjoying the day while drinking Coca-Cola.

From beverages to sliced meat, Loomis could find a way to make a striking ad. “Art cannot depend upon copy,” he said. “It must tell its own story. Advertising has reached a point in its development where tricks are out and we must go back to fundamentals.”

Loomis published his first book, Fun with a Pencil, in 1939. Although subsequent books built on previous ones, the fundamental lessons in all were the same. He was a firm believer in the expression and style of the individual artist.

Loomis, Andrew. The Eye of the Painter and the Elements of Beauty. New York: The Viking Press, 1961.

Loomis, Andrew. Figure Drawing for All it's Worth. New York: The Viking Press, 1943.