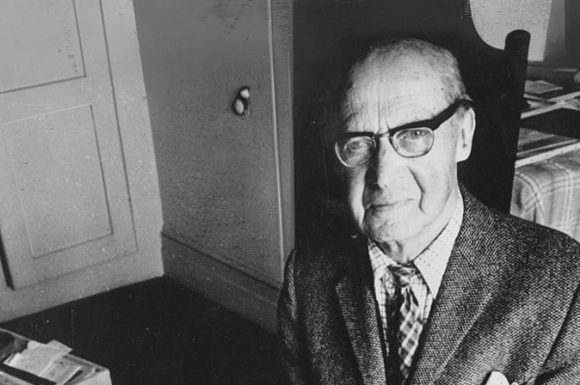 Ernest Howard Shepard was born on December 1, 1879 in London to Henry and Jessie Shepard. Ernest’s father, Henry, was an architect from a highly respected family, and his mother was the daughter of distinguished watercolorist, William Lee. Creativity being prominent on both sides of Ernest’s family, it was unsurprising that his father wanted him to become an artist. Though his early years of childhood were happy, his life changed at ten years old when his mother died. He and his two siblings moved in with their aunts until Henry Shepard could save enough money to buy a house for them all in Hammersmith. Once settled in their new home, Ernest attended school at St. Paul’s where his uncle was headmaster. It was clear to his teachers from a young age that Ernest would excel at art, so he was enrolled in an advanced drawing class. Like Gordon Browne, Ernest took additional art classes on Saturdays at Heatherley’s art school in London. Though Ernest envisioned a more adventurous life for himself, he pursued a career in art by winning a scholarship to the Royal Academy Schools where he continued his art studies in “irrepressibly high spirits.” Shepard’s friendly personality, fondness for practical jokes, and theatricality earned him the nickname “Giddy-Kipper,” of which the shortened version of “Kip” stuck with him for the rest of his life.[1] While at the Royal Academy, Shepard met his future wife, Florence Chaplin, who was also an art student three years ahead of him. Neither of them had any money, so Florence agreed to marry Ernest when they had sufficient finances to start a life together. Coincidentally, the painting Ernest had successfully submitted to the Royal Academy exhibition of 1904 had sold for £100, while Florence had just received her payment for a completed mural commission; the two felt suddenly prosperous and decided to get married. The couple moved to Shamley Green, Surrey where they painted together and raised two children, Graham (born in 1907) and Mary (born in 1909).

Though two of Shepard’s paintings had been accepted to the Royal Academy exhibition and the Paris Salon the same year he graduated art school, he still considered himself “no good” at oil painting. He didn't believe he could handle the medium properly, so he never displayed his paintings in public again. Instead, Shepard turned his full focus to illustration, which he knew he wanted to pursue professionally. He submitted ideas to Punch two or three times a week until they accepted two of his drawings in 1907. Since graduating art school, Shepard worked as a book illustrator on publications such as Tom Brown’s Schooldays by Thomas Hughes, David Copperfield by Charles Dickens, Henry Esmond by W.M. Thackeray, Aesop’s Fables, and Smouldering Fires by Evelyn Everett-Green. In 1914, when World War I began, Shepard enlisted in the Royal Artillery and was assigned to the 105 Siege Battery where he battled at the Somme, Arras, the Third Battle of Ypres, and in Italy. At the end of his four-year service, Shepard was awarded a Military Cross and retired with the rank of Major. While he was at war, he continued to submit ideas to Punch regularly, drawing and painting the countryside around him in Europe. His perseverance clearly paid off, as upon his return home from the war he was offered to join the “table” at Punch. A full time position at Punch was Shepard’s dream since it not only offered a regular income, but would also allow him to sit where the revered Sir John Tenniel had once been, and work for the landmark publication that his wife’s grandfather, Ebenezer Landells had founded. Shepard had been so excited that he recalled “I nearly fell off my perch when I got the letter.”[2]

The “table” of regular staff at Punch met on a weekly basis at dinners or luncheons to discuss the two political cartoons that would be in the upcoming issue. Shepard sat next to E.V. Lucas who was an important figure in the world of belles lettres and also a chairman at the publishing company Methuen. Lucas was also a friend and colleague of A.A. Milne, a prominent playwright, poet, essayist, and former assistant editor at Punch. In 1923, Milne sent Lucas a submission of children’s verses called When We Were Very Young that featured prose he had written about his three year old son, Christopher. After Lucas had received Milne’s script at Methuen, he suggested that Punch should publish some of the verses before it appeared in book form. Ernest Shepard was recommended to Milne as an illustrator for the text. Shepard illustrated eleven of Milne’s verses that appeared in Punch from January to June 1924. Once Milne saw the illustrations that Shepard had created, he was enthusiastic enough about his work to invite him to illustrate the entire book. When We Were Very Young was released later in 1924 and sold so well in America and England that it was reprinted four times before the year’s end.

The following year in 1925, A.A. Milne purchased Cotchford Farm in Sussex as a country home for he and his family to escape London on weekends and holidays. The house was surrounded by meadows and woods that would inspire the following books about the adventures of Winnie-the-Pooh and Christopher Robin. Though the scenery of Milne’s new house in Sussex had an influence over the setting of his stories, it was his son’s nursery toys that were direct inspiration for Pooh and his friends. Christopher Milne’s teddy bear became Winnie-the-Pooh, Eeyore was a well-loved stuffed animal whose head had started to sag by the time A.A. Milne wrote his stories giving him his “gloomy disposition,” Piglet was a present from the Milnes’ neighbors, Kanga and Roo were presents from Christopher’s parents. Owl and Rabbit were the only two characters that were invented by A.A. Milne himself.

Ernest Shepard had a wooden toy horse that he had loved dearly as a child but he was forced to part with when he moved in with his aunts after his mother died. It was this attachment to a beloved toy that may have helped him understand the importance of the Winnie-the-Pooh stories and the need to create illustrations that brought Christopher Robin’s toys to life. Shepard’s own son Graham had a teddy bear named Growler that he carried around with him, and it was this bear in particular that inspired Shepard’s memorable Pooh bear. In order to follow Milne’s clear instructions for the illustrations, Shepard travelled to his country house on Cotchford Farm to observe the area which inspired Milne to write about the Hundred Acre Wood. When Winnie-the-Pooh was published by Methuen in 1926, it received as much praise as When We Were Very Young, and prompted another two books: Now We are Six was published in 1927, and House at Pooh Corner was released in 1928, completing the quartet of Milne’s tales of Christopher Robin. As Susan Meyer states in A Treasury of the Greatest Children’s Book Illustrators, the relationship between between Milne and Shepard “demonstrates the finest example of a successful collaboration between author and illustrator.”[3] Though the two men were not close, and harbored very different personalities, they clearly communicated in an effective way to produce a work of art that is still cherished by children all over the world.

The success of Milne’s stories was bittersweet for both author and illustrator. Though both men were happy with the fruits of their labor, neither wanted to be associated with this single collection of writing for the rest of their lives. Milne declared that it was “easier in England to make a reputation than to lose one,”[4] and Shepard is known to have been frustrated that his illustrations for the Winnie-the-Pooh tales overshadowed the rest of his work. For example, the publication of When We Were Very Young in 1924 completely covered any recognition he should have received for his illustrations in E.V. Lucas’ Playtime and Company, released immediately following Milne’s work. A.A. Milne tried his best to lose the reputation of “children’s author” though Ernest Shepard continued to illustrate Pooh for the rest of his life, creating illustrations for new editions and exhibiting his original drawings to sell in galleries. Shepard had made some money from the success of the Winnie-the-Pooh books, but he had accepted a flat fee instead of royalties as payment, meaning that he could use the money made from the sales of his drawings, especially after the sudden death of his wife, Florence, in 1927. Shepard made some of his best artwork after the publishing of the Pooh books and was pleased with the amount of commissions that were sent to him in the late 1920s.

By 1931, Kenneth Grahame invited Shepard to illustrate his children’s classic The Wind in the Willows. Shepard stated “I was more excited when they offered me that than Pooh.”[5] Though Grahame had already asked three other illustrators to work on his book, he hadn’t liked their interpretations of his famous characters calling them “puppets.” Arthur Rackham had been invited to illustrate the story but had to turn it down due to a conflicting publication. (He would later have the chance to illustrate the story as his last artwork before his death.) Before beginning his illustrations, Shepard met with Kenneth Grahame to discuss his plans for the book and take a tour of the forest and river that inspired Grahame’s stories. The second time Shepard met with Grahame was just before his death when he had the chance to show him some of his line drawings for the book. Though Grahame would never seem them published, he told Shepard “I’m glad you made them real.”[6] The illustrations for The Wind in the Willows were Shepard’s favorite that he ever drew.

Throughout the 1930s, Shepard maintained his work ethic, illustrating fourteen books, dust jackets and frontispieces, and continuing his contributions to Punch. The new editor of Punch in 1932, E.V. Knox, married Shepard’s daughter, Mary in 1937. Still working at the magazine now run by his son-in-law, at the start of World War II, Shepard began drawing a series of cartoons attacking Hitler and other leaders involved in the war, though this motivation for political cartoons was short-lived and ended along with the war. Shepard admitted that, though he greatly admired Tenniel, he was not adept at caricature and continued with his usual humorous cartoons. A great deal happened as Shepard aged; his son was killed at sea near the end of World War II, Ernest himself remarried at the age of sixty-five, and he was “sacked from Punch” by the new editor, Malcolm Muggeridge. Between 1954-55 Ernest illustrated nine books, traveled, gave lectures, and even wrote two autobiographies: Drawn from Memory (1957) and Drawn from Life (1961). In that same span of time, he also wrote an illustrated Ben and Brock and Betsy and Joe. Ernest continued to draw in his nineties, his last work being the color illustrations for Winnie the Pooh. The publisher, Methuen, had printed his drawings for the first set of books so he could paint over them in watercolor. In less than four months, Shepard painted 240 drawings for the books, an impressive feat at ninety-three years of age. Ernest Howard Shepard died three years later on March 24, 1976, the same year as Winnie the Pooh’s 50th Anniversary.