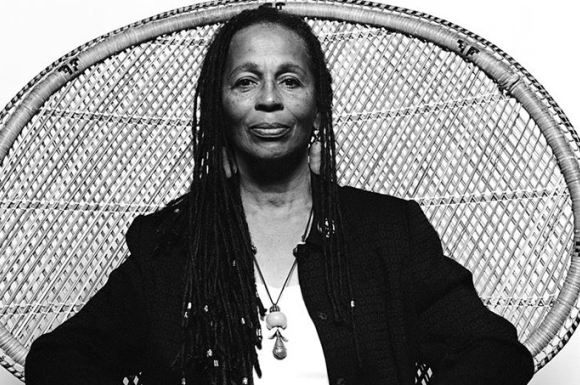 Born Joan Angela Lewis in Oakland, California, she grew up in Oakland during the height of the 1960s Civil Rights Movement. Her father, John Henry Lewis, was the first Black man to become the light heavyweight boxing champion of the world, a title he held from 1935 to 1939.[2] Her mother, née Florence Reid, was a homemaker who played piano, was a voracious reader, and enjoyed art and drawing. She inspired her children to seek a higher education.[3] Lewis attended Oakland Tech high school where she was recognized as a talented jazz violinist. During her high school years, Lewis not only started the Black Student Union, she advocated for a Black Studies course and implemented a Black History Club in her school.[4] She was also a member of the school’s swim and track teams.[5]

As early as age sixteen Lewis attended forums on Black history and culture at Merritt College, the birthplace of the Black Panther Party, and the location where Party founders Huey Newton and Bobby Seale first met. While her parents encouraged Lewis to pursue a jazz career, the injustices Lewis saw surrounding her prompted her to drop out of high school, put her career on hold, and do something to help the people in her community.[6] She witnessed first-hand the Black Panther Party’s efforts to advocate for her Black community suffering from issues such as unemployment, lack of affordable housing, and access to proper healthcare; Lewis was eager to do her part to alleviate the suffering.

Originally ridiculed by the Party’s all-male members for wanting to join the Party, Lewis gained acceptance after she stormed into the Party’s Oakland office in the spring of 1967 and demanded that she not only be made a member of the Party, but also that she be given a full initiation, including firearms handling. As a Black Panther, Lewis took on many roles, including writing editorials and drawing over forty political cartoons, many of which were published between 1967 and 1969 in The Black Panther newspaper under the name,”Matilaba.”[7]

After leaving the Black Panther Party in January 1969, Lewis became a graphic artist and jazz violinist. However, she continued to engage in issues of community development. She toured internationally with saxophonist John Handy and went on to teach visual arts and jazz to inner city youth. Lewis founded the Oakland Black String Ensemble. She also uses her visual art skills as an Art Instructor/Counselor at the Healthy Babies Project.

Lewis worked on the 1995 Panther movie with Mario Van Peebles and was the author of Panther: A Pictorial History of the Black Panthers and the Story Behind the Film. In 2001 she was awarded the Congressional Recognition Award for “Performing Artist and Recognition of Community Work.”[8]

Bloom, Joshua and Waldo E. Martin. Black Against Empire: The History and Politics of the Black Panther Party. Berkeley: University of California Press, 2012.