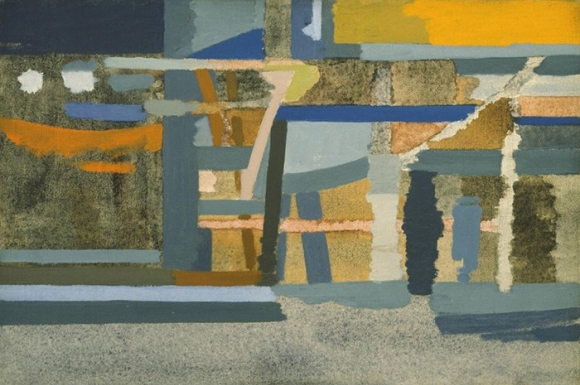 Howard Knotts (1922-2004) was a painter of landscape-inspired subjects and an illustrator of nationally acclaimed children’s books. From his earlier, more geometric, city skylines to his softer, bucolic vistas, Knotts displayed a talent for creating a refreshing view of banal and humble subjects. This passion for “commonplace subjects harkens back to nineteenth-century Romantic interest in exploring the beauty in the ordinary.”[1]

Knotts was born in Springfield, Illinois in 1922. As a teenager, he attended a summer art camp in Saugatuck, Michigan, which was sponsored by the Art Institute of Chicago. After enrolling at Knox College in 1942, his education was interrupted by World War II during which he served in the Army Air Force flying supply missions to the Asian theater. Honorably discharged in 1946, Knotts continued his studies at the Art Institute of Chicago and graduated with honors in 1949. He spent the summer of his graduation in New Mexico studying with abstract painter, Carl Holty, and shortly thereafter moved to New York City where he pursued his passion at the Art Students League.

A three-person exhibition called “Newcomers” at J.B. Neumann’s New Art Circle Gallery in New York City was where Knotts made his debut. It was also where he met Ilse-Margret Vogel, an assistant at the gallery, writer, and illustrator, who became his wife in 1951. In 1956, Knotts was featured in “Modern American Drawings,” a traveling exhibition organized by the Museum of Modern Art. While Knotts and his wife traveled together to various cities abroad, it was in Bangall, Dutchess County, New York, in where they bought a farmhouse in 1964 and settled down. During the 1960s Knotts was featured in solo exhibits at the Greer Gallery in New York City and the High Point Gallery in Lenox, Massachusetts. Solo shows of his work were also held at High Point in 1970 and 1975.

Knotts created works characterized by love of landscape and a luminous light unique to the Hudson Valley. His art was exhibited throughout his career in many regional galleries and museums as well as national venues, including the Baltimore Museum of Art, the Phillips Gallery in Washington, D.C., the Detroit Institute of Art, the Los Angeles County Museum, and the San Francisco Museum of Art.[3] Knotts died on September 4, 2004 while preparing for a career retrospective at Albert Shahinian Fine Art in Poughkeepsie, New York.

[3] Lempka, Wayne. ”The Sky Above and The Earth Below: The Art of Howard Knotts.”

Knotts, Howard. Great-Grandfather, the Baby, and Me. New York: Atheneum, 1978.