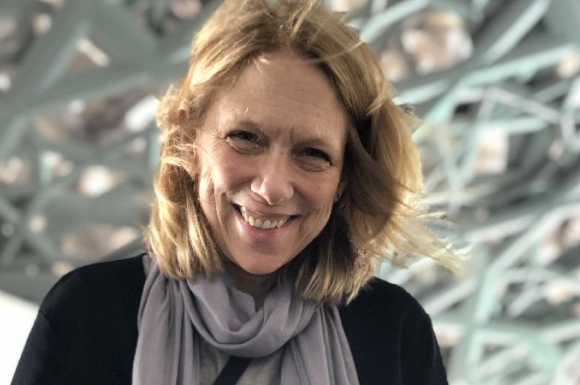 Liza Donnelly (b.1955) is an American cartoonist, author, and creator of digital live drawing—a new form of journalism using a tablet to instantly share visual reporting on social media. She is best known for her work in The New Yorker and is resident cartoonist of CBS News. Using her digital live drawings, Donnelly has covered events such as the Oscars, the Democratic National Convention, and the 2017 Presidential Inauguration. Her live digital reporting has been featured on CBS News, The New Yorker, Fusion, and NBC among others. She lectures worldwide and is also the author of seventeen books including a series of seven children’s books about dinosaurs for Scholastic.[1]

Born in Washington, DC and raised in a Quaker household, Donnelly graduated from Sidwell Friends School. Her mother, Elizabeth, introduced her to cartoons at the age of six and encouraged her to use drawing as a form of self-expression. Donnelly went on to study art at Earlham College in Richmond, Indiana, graduating in 1977. While developing her own personal style, she drew inspiration from editorial cartoonist, Herbert Lawrence Block (Herblock); Doonesbury’s Garry Trudeau; cartoonist and author, James Thurber; and Peanuts’ creator, Charles Schulz. After moving to New York in 1977, she was determined to draw for The New Yorker. After faithfully submitting her work to the magazine week after week, she sold her first cartoon to The New Yorker in 1979, and has been a regular contributor ever since, becoming part of a group of aspiring cartoonists, including her future husband, Michael Maslin. Her drawings also frequently appear in Slate, The New York Times, The Daily Beast, The Huffington Post, CNN.com, Forbes.com, and many more.[2]

A gifted speaker, Donnelly travels worldwide to lecture about freedom of speech, women’s rights, world peace, and other matters. She uses her talent to tackle global issues with humor and wit. A founding member of the U.S. branch of the international group, FECO (Federation of Cartoonists Organization), she also encourages cartoonists worldwide to contribute to her “World Ink” site and share their cartoon commentaries on matters of global importance.

Besides children’s books, Donnelly has written or contributed to numerous other publications including Cartoon Marriage, about her life with fellow New Yorker cartoonist Michael Maslin, and the definitive book about her colleagues: Funny Ladies: The New Yorker’s Greatest Women Cartoonists and Their Cartoons.[3]

Donnelly taught at Vassar College and the School of Visual Arts. She received an honorary PhD from the University of Connecticut and is a cultural envoy for the U.S. State Department, speaking about women’s rights, freedom of expression, and cartoons. She and Michael Maslin have two daughters and live in Rhinecliff, New York.