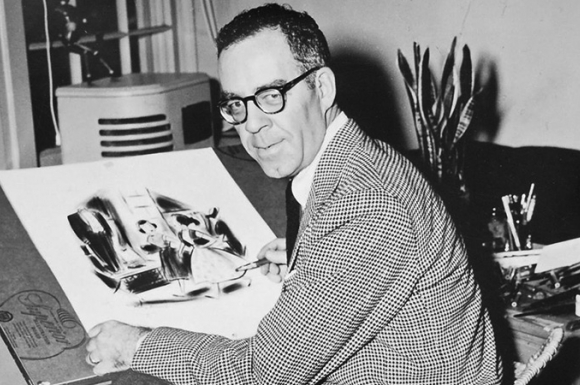 Whitney “Whit” Darrow, Jr. (1909 – 1999) was an American cartoonist, illustrator, and author best known for his fifty-year career at The New Yorker magazine. Darrow helped develop the magazine’s cartoon style of psychological snapshot with a one-line caption. Unlike most of his colleagues, he also wrote his own captions. A prolific artist, Darrow produced some 1,500 cartoons for The New Yorker. At times the magazine published fifty of his cartoons in a year, including full-page treatments and covers in color.

Born in Princeton, New Jersey where his father was founding director of Princeton University Press, Darrow grew up in Greenwich, Connecticut and attended Greenwich High School. During high school he wrote parodies for the school newspaper and was a member of the class crew squad. Later, while a student at Princeton, he wrote a humorous column for The Daily Princetonian and was editor of The Princeton Tiger. After graduating from Princeton in 1931 Darrow studied at the Art Students League with Thomas Hart Benton and other artists, and he began selling cartoons to Judge, Life, and College Humor. It was in 1933, at twenty-four years of age, that his affiliation with The New Yorker began. It would last until he retired from the magazine in 1982.[1]

A shrewd observer of human behavior, Darrow’s cartoons often focused on the contradictions and absurdities of middle-class suburban life in America. Martin Plimmer of The Independent describes Darrow’s art as “a muscular drawing style, dense and darkly etched, a compound construction of grey wash and scribbled shade and bold, reiterated pencil strokes, from which his forms emerge with a precision and lightness of foot that belie all that weight of graphite. Lightness of heart too, for Darrow was never morbid or bitter. Even the most foolish of his subjects glows in the positive light of his enthusiasm and affection.”[2]

Darrow published four collections of his work: You’re Sitting on My Eyelashes, Give Up?, Stop Miss, and Please Pass the Hostess. He illustrated children’s stories and other books by such authors as Nathaniel Benchley, Jean Kerr, and Johnny Carson, among others.[3]

Darrow and his wife, Mildred, were living in Shelburne, Vermont when he died at the age of eighty-nine. He had a son, daughter, and two grandsons.

Winn, Marie and Whitney Darrow, Jr. The Thief-Catcher: A Story About Why People Pay Taxes. New York: Simon and Schuster, 1972.