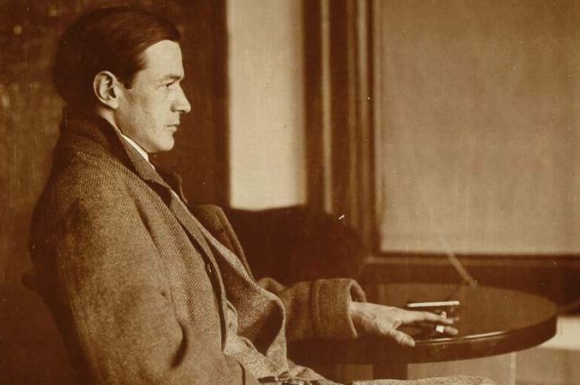 Everett Shinn is best known for his theater scenes and images of the streets of New York City. Born in Woodstown, New Jersey, Shinn moved to Philadelphia where he studied engineering and industrial design at the Spring Garden Institute. In the middle of the 1890s, Shinn worked as an illustrator for the Philadelphia Press and studied at the Pennsylvania Academy of the Fine Arts, where he met his first wife, the illustrator Florence Scovel. At the Academy and in the pressrooms, he also befriended George Luks, William Glackens, John Sloan, and Robert Henri.

Shinn moved to New York City in the late 1890s, where he quickly established himself as a leading illustrator and graphic artist. He worked at the New York Sunday World and sought commissions from magazines. Shinn’s success as an illustrator was firmly established in 1900 when his dashing drawing of the Metropolitan Opera House in the snow was featured as the center spread in Harper’s Weekly. According to the artist, when he brought his portfolio to the magazine, the editor asked him if he happened to have a drawing of the Opera House and Broadway in the snow, and Shinn confirmed that he did. He did not, so the artist hurried home to make one in time for the deadline the following morning. A two-page spread in Harper’s Weekly was too good an opportunity to be missed!

Around the turn of the century, Shinn had illustrations in many mainstream publications, including Ainslee’s, Scribner’s, and Harper’s Weekly, as well as the humor magazine, Truth. He also illustrated books such as Frédérique, a novel by the French author Charles Paul de Kock. In his illustrations, Shinn developed a distinctive style that carried over into his other graphic art. Working in pastel and charcoal with rapidly drawn diagonals, he captured the energy of the city and the people moving through it. His critics noted that his drawings, while dazzling with clever style, sometimes lacked substance and conveyed little emotion.

As a young man, Shinn did not draw strict boundaries between illustration work and independent art. Around 1900 he had several solo shows featuring drawings of the very same urban subjects that he was illustrating for the popular press. He revisited illustration subjects for his non-commissioned drawings and paintings, and he included illustrations in his gallery exhibitions. He also painted murals in homes, theaters, and public buildings and worked as an art director for films, participating in the entire range of visual culture in the early 20th century.

As a painter, Shinn joined his Philadelphia friends in the exhibition of "The Eight" at Macbeth Gallery in 1908, but unlike Sloan and Glackens he never moved away from commercial art. He published in Puck, Harper’s Weekly, and the Metropolitan Magazine throughout the 1910s, and he illustrated books, including several reprints of Charles Dickens stories, through the late 1930s and 1940s.