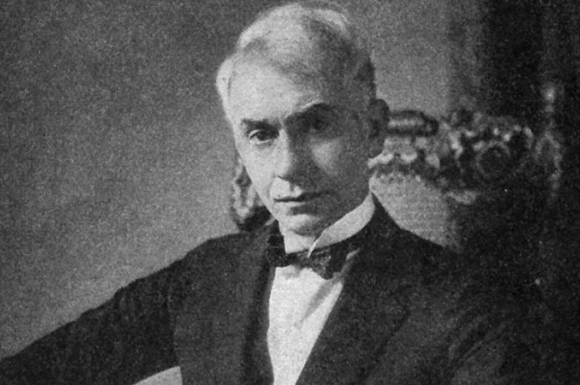 Franklin Booth was born in 1874 in Clarksville, Indiana. Living on a forty-acre farm, he began drawing images of farm animals, buildings, and rural scenes at an early age. He studied illustrations in schoolbooks and magazines, and, mistaking the woodcut-produced engraving lines for lines drawn by pen, practiced reproducing each line with pen-and-ink.[1] Booth also discovered perspective when observing a fence descending into the distance.

After graduating from Union Academy, a local Quaker high school, Booth decided to continue working on the farm, pitching wheat and plowing corn during the day, while drawing at night. As Booth labored, he observed his natural surroundings and contemplated how to evoke them in drawing. His ability to capture the blazing summer sunlight, cool shade under trees, soft cloudscapes, and sweeping expanses of terrain reflect an acute understanding of his rural environs. As Booth stated in an interview, “my greatest lessons in art were when I worked on a plow or with the hoe in a field alone…I do not like to follow the other fellow’s idea. I like to think out an original idea myself. That’s why I think my farm life was valuable to me. There while working day after day in a field I learned to really think.”[2]

In 1899, Booth’s illustration-embellished poem, “A Thanksgiving Ode,” appeared in the Indianapolis News. A year later, Booth took a three month course at the Art Institute of Chicago and, while there, sold a country scene drawing to a major newspaper. In 1902, Booth attended the Art Students League in New York and worked as a staff artist for a small magazine. When the magazine failed, Booth returned to Indiana to work for The Indianapolis Star and, in 1903, Indianapolis News. As an Indianapolis News artist, Booth produced line drawings for news stories, wrote and illustrated poems, and drew advertisements. He illustrated for the Frank A. Munsey Company in New York for a year, and left to visit Europe in 1905. During the three month trip, he spent the most time in Spain studying under the American painter Robert Henri. Despite having no influence on his technical ability or style, the trip to Europe served as a talking point in promoting himself to magazine editors.[3]

Booth returned to New York in 1906 and quickly built a reputation as an independent illustrator. First illustrating a poem for the magazine, Scribner’s, he next drew for Harper’s, then McClures, Good Housekeeping, Ladies Home Journal, and Colliers (for which he drew a portrait of Theodore Roosevelt). While establishing a primary studio in New York City, Booth also built a frame studio behind his parents’ home in Indiana for month-long summer visits.[4]

Booth’s style of pen-and-ink line drawing, initially developed at childhood, distinctively evoked the linework of old woodcut engravings. With calculated placement and spacing of pen lines, Booth’s drawings encompassed ranges of tonal value and density. Even in his late career, Booth’s imagination remained seemingly ingrained with the dreamlike scenery of rural Indiana, which he said captivated him with its “indescribable haze, its luminous silence, its spiritual suggestiveness.”[5] Booth’s picture concepts, prioritizing ideas and ideals over particulars, generally expressed his dedicated understanding and appreciation for both natural and man-made elements.[6]

In 1913, Booth produced sixteen watercolor illustrations for Flying Islands of the Night by James Whitcomb, depicting humans dwarfed in scale by floating palaces, monumental architecture, and fantastical landscapes. In 1916, he made charcoal sketches for A Hoosier Holiday, written by his longtime friend and fellow Indiana-native, Theodore Dreiser. He also illustrated an edition of the Harvard Classics Shelf of Fiction for Colliers as well as for an edition of The Prince and the Pauper by Mark Twain.

From 1920 to 1930 companies like Montgomery Ward, Paramount Pictures, Proctor & Gamble, Underwood Typewriters, General Electric, and Victor-Victrola sought after Booth for advertisement illustrations. In his advertisement drawings for Etsy Organ Company (which he regarded as his favorite illustrations), Booth drew mythological scenes, such as nymphs playing flutes in a windy grove, and manor house scenes, where spirits playing musical instruments swirl above pipe organs.[7]

Booth cofounded the Phoenix Art Institute in New York and taught there between 1925 and 1946. In 1948, he died from a stroke in his New York studio. Booth’s ashes were scattered over his parents’ graves in Indiana. Noted for his exceptional line-drawing style and idealistic vision of art as “truth and beauty,” Booth was inducted into the Society of Illustrators Hall of Fame in 1983.[8]