The only man to whom the gift was given to draw accurately a scene merely glimpsed was Dan Smith, who came later upon The World to enormously raise the prestige and status of the downtrodden but patient toilers, not only by his piety and sobriety, the same being the son of a parson, but by his marvelous technique. He did not need to make sketches, this wizard of the pen and brush, one swift squint at the scene was enough. He is going strong still, but I wonder that our envy did not poison him in early life! 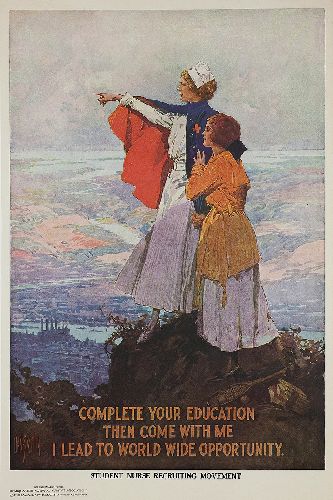 Dan Smith was an illustrator of remarkable talent and distinctive style, whose work from the 1890s through the early 1930s earned him widespread recognition. Yet, as well-known and highly regarded as he was in his lifetime, he has since, like so many of the masterful practitioners from the Golden Age, become virtually forgotten. This may be due in large part to the circumstance that his greatest fame was in the ephemeral realm of newspaper illustration.

While Smith created countless paintings, posters, book and magazine illustrations, and advertisements, he was most lauded for his decades of stunning covers for the Sunday supplements featured in many major papers of the day. In this arena he was a star, employed by both Hearst and Pulitzer, and syndicated across the country and around the world. But as photography supplanted illustration in the press, Smith’s work faded from memory. Yet, it was not entirely extinguished. A few artists, notably comic book great Al Williamson, along with fans of illustration fortunate enough to stumble across printed and original examples of his craft, kept a burning ember alive. Now the time has come to give him due recognition. 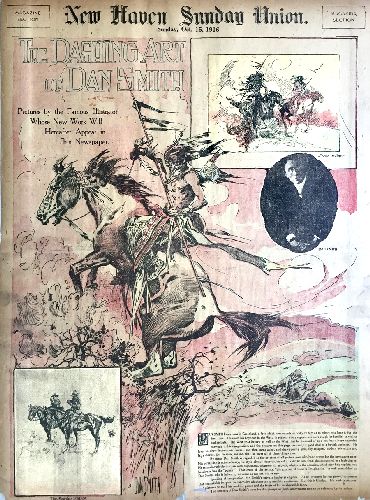 Dan Smith was born Daniel Frederik Schmidt on March 29th, 1865, of Danish parents, in Ivigtut, near Cape Desolation, Greenland, where his father was the first superintendent of a cryolite mine.

In 1869, when Smith was four, his father moved the family to Nebraska, twenty miles from Grand Island. For the next four years, the family lived the life of pioneers. This life had to have had an indelible influence on Dan Smith’s subsequent Western art which was so highly revered in his lifetime that it lead to his popular consideration as a successor to Frederic Remington upon Remington’s death in 1905. 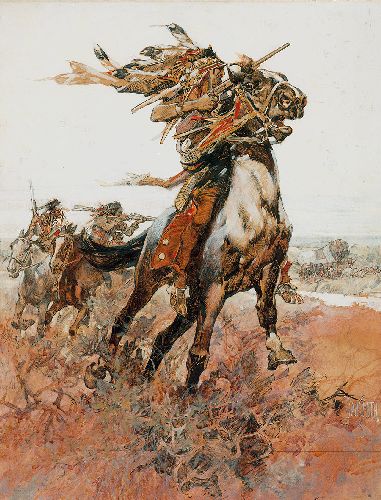 After attempting to carve out a life in the Nebraska frontier, the family moved to Philadelphia in 1873. In 1879, at the age of fourteen, Dan travelled to Copenhagen, Denmark to study at the Public Art Institute. He subsequently returned to America and completed his studies at the Pennsylvania Academy of the Fine Arts in Philadelphia.

Daniel Schmidt adopted the name Dan Smith by 1890, when he began his career as a staff reporting artist for Leslie’s Weekly. His first Western illustrations appeared in that publication in the early part of 1891 and provide a record of life and events in the American West at that time, including conflicts with American Indians at the Pine Ridge reservation in South Dakota, which ultimately resulted in the tragedy of Wounded Knee.

His work during the next six years concentrated on Western themes, located primarily in New Mexico and the Southwest. By this time, Smith had developed a remarkable dry-brush technique that was to be a distinguishing feature of his work from then on. He also developed an amazing facility and sympathetic eye for rendering animals, especially horses and bison, which lead to his becoming the “go to” artist for depicting horses and other animals in magazines, book illustrations, newspapers, and advertisements throughout his entire career. His animals were dynamic and graceful, often faintly stylized, and always recognizable as his. 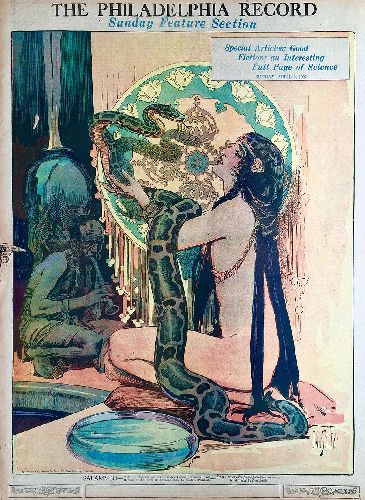 After leaving Leslie’s Weekly, Smith joined the Hearst organization around 1897. Like so many of his fellow artists at the time, he became a staff artist with the New York Journal covering the Spanish-American War. He then moved on to The New York Herald, where he excelled at creating the full-page covers for the paper's Sunday supplements, a skill that would find Smith his greatest fame when he left to join Joseph Pulitzer’s The New York World. It was with The World where he began the most productive years of his career and created the work for which he is best known. In their 2005 book The World On Sunday, authors Nicholson Baker and Margaret Brentano noted, “What was most striking about the paper (and in particular the Sunday edition) is that it was filled with colorful art-caricature, full-page cartoons, disaster drawings, fashion illustrations, hand-lettered typography, weird science, halftone photographs, maps, and more.” 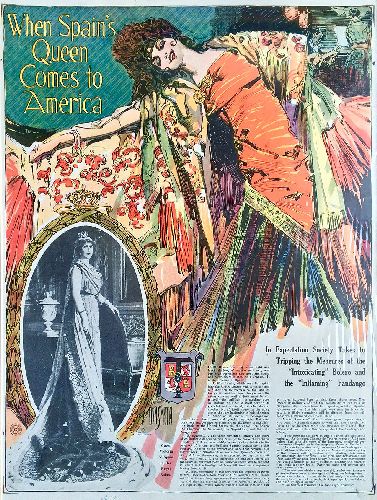 As one of The World’s Sunday magazine’s most prolific illustrators for over twenty years, drawing nearly all of its covers, Smith became known to millions of readers in the United States, and, through syndication, the world. In addition to decorative images, Smith also illustrated sumptuous, serialized narrative stories, which he sometimes wrote as well. Smith also painted several World War I posters, was the official poster artist for the 1926 Sesquicentennial celebration in Philadelphia, and illustrated the 1922 yearbook of the U.S. Naval Academy, The Lucky Bag. 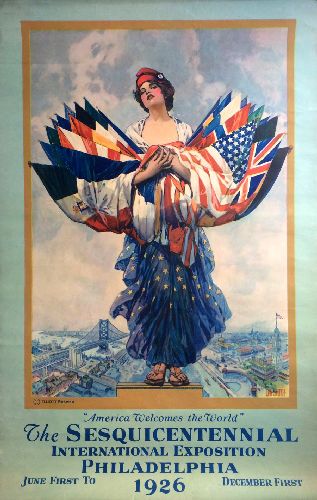 After his years with The World, Smith returned to the Hearst organization at Newspaper Feature Service, which became King Features Syndicate, where his brother William spent his career as art director. There his illustrations appeared in many newspapers and magazines until his death on December 10, 1934. 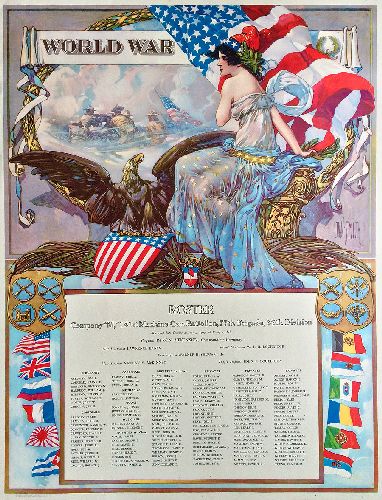 During his lifetime, Dan Smith was known not just for his brilliant illustrations, but also for his considerable work in oils and etchings. He was a long-standing member, artistic contributor, and officer of The Pleiades Club, a bohemian Greenwich Village association of artists, poets, authors, musicians, and bon vivants. Smith was devoted to his wife, Wilhelmina von Lowe, for whom he crafted elaborate hand-drawn valentines each year. The couple were known as stylish and dramatic figures in the artistic circles of Manhattan. Eleanor Smith, the wife of Dan’s brother, William, was the model for many of Dan’s distinctive and glamorous renditions of women. In addition to his considerable artistic talents, one of Dan’s hobbies was invention—he held several patents on a steam turbine. He completed the majority of his later work first at his studio located at 50 West 67th Street and, finally, in his duplex apartment at 257 West 86th Street in New York where he resided at the time of his death.

This biography was contributed by Alex Bialy.

Special thanks to Jo-Ellen Smith Greene, granddaughter of William Smith, and grand-niece of Dan Smith, for her contributions of the biographical information and other content to this essay.

Alex first encountered the art of Dan Smith when he happened upon the original drawing for "Rocky Ranch, Part One" at a flea market in the 1980s. Struck by its unique facility and dynamism, he has since sought out as many examples of Smith’s work as he could find, as well as information about the remarkable but now obscure illustrator. He will be working with Picture This Press/Lost Art Books on an upcoming book on the art and life of Dan Smith.

Alex worked for nearly two decades as Studio Manager, production assistant, and sometime inker for renowned comic book and fine artist Barry Windsor-Smith. Previously and subsequently he is an Electron Microscopy specialist the field of semiconductor device manufacturing and research.