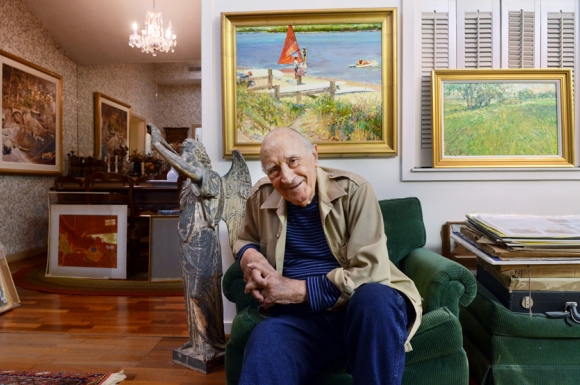 After studying advertising art in high school, Bernard D’Andrea (b. 1923) earned a scholarship to Pratt Institute of Art in Brooklyn by winning a national art contest in Scholastic Magazine.[1] He studied under Will Burtin (1908-1972). The artist noted, “My family was always art oriented. They encouraged me. They called me Bernardo ‘Leonardo’ D’Andrea.”[2]

Leaving Buffalo for good to establish a career in illustration in New York City, D’Andrea became an illustrator for mainly women’s magazines. “They called us [he and his artist circle] the ‘boy-meets-girl illustrators,’” D’Andrea recounted.[3]

When the Second World War began, D’Andrea, like many other artists, spent four years as an artist for the U.S. Army. Through this, he met Art Cooper, brother of Charles Cooper, who ran the Charles E. Cooper studio in New York City. This studio was a major commercial agency that represented artists and secured them illustration jobs in some of the day’s most reputable magazines. When D’Andrea gained a place in the studio, illustration was in great demand, especially designs that followed the decade’s realism fad. In fact, Cooper studio artists rarely strayed from this realism, but D’Andrea was one of the few who did.

Generally, D’Andrea painted whatever he was commissioned to, although his work largely fell into the “womens” category, creating advertisements and painting scenes to accompany short stories in magazines like The Saturday Evening Post. The artist worked throughout his career mostly in oil paint. But his style, just like that of his wife, artist Lorraine Fox (1925-1976), changed after taking lessons with landscape painter and poet, Reuben Tam (1916–1991).

While studying under Reuben Tam, D’Andrea explored abstract expressionism. Of his works painted in this style, he stated: “they were social commentary on American culture at the time.”[4]

In the 1980s, D’Andrea was convinced by his artist friend, Joe Bowler, to show his work at a gallery in Hilton Head, South Carolina. Finding that the community was very receptive to his quasi-expressionist, plein aire landscape paintings, he visited many times until finally deciding to relocate there in 1993. His last illustration for a magazine was published in 1994. Since moving to Hilton Head, D’Andrea has gravitated toward painting images of the beaches, marshes, and grand sunsets that he witnesses daily.

In regards to his move to South Carolina, D’Andrea said: "I felt like Vincent van Gogh, leaving each day to paint in the fields… This was all very new to me -- the landscape of the Lowcountry, with the new light I was working with and the new tropical shapes."[5]

Bernard D’Andrea’s work has been produced for national and international recipients. In 2015, he was inducted into the Society of Illustrators’ Hall of Fame.

His work is in the collections of the Brooklyn Museum, Hunter Museum, the U.S. Coast Guard Naval Museum in Washington, D.C., and the Telfair Museum of Arts & Sciences in Savannah, Georgia. His work has been shown in Allan Stone Galleries and Hammer Galleries of New York City, among many others.