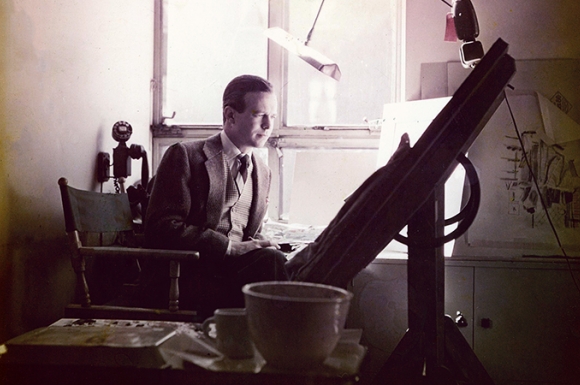 Born in Pasadena, California, J. Frederick Smith (1917-2006) studied art at the Chouinard Art Institute in Los Angeles, then moved to New York in 1938 where he worked for the Charles E. Cooper Studio. While employed at the studio, he fell in love with and soon married fellow illustrator, and the first woman hired by the studio, Sheilah Beckett. Incidentally, Smith would frequently use Beckett as a model for his work. He first found success as an artist of interior illustrations for magazines like Argosy, Collier's, The Saturday Evening Post, Esquire, Good Housekeeping, Woman's Home Companion, and Cosmopolitan. In 1952, he was recruited by Esquire magazine to create pinup art for their monthly, as well as provide covers for both Esquire and Coronet, a magazine owned by Esquire.

Smith's pinup art was published in Brown & Bigelow calendars in the 1950s alongside the work of illustrators Gil Elvgren, Rolf Armstrong, Al Buell, and Earl Moran. Although most of his work was created for periodicals, Smith also illustrated advertisements for Whitman's Chocolates and Cannon Nylons.

Smith began a transition to the field of photography beginning in 1956, and is notable for being the photographer of the first cover of the annual Sports Illustrated Swimsuit Issue in 1964. Throughout the 1970s, Smith published several books on the subject of photography. Just as his art focused on feminine beauty, his photography books showcased the eroticism of the female form. Although his artistic focus had changed, Smith continued to provide painted illustrations for magazines throughout the 1980s.

Smith, J. Frederick and Mary Arrigan McCarthy. Sappho by the Sea: An Illustrated Guide to the Hamptons. New York: Belvedere, 1976.