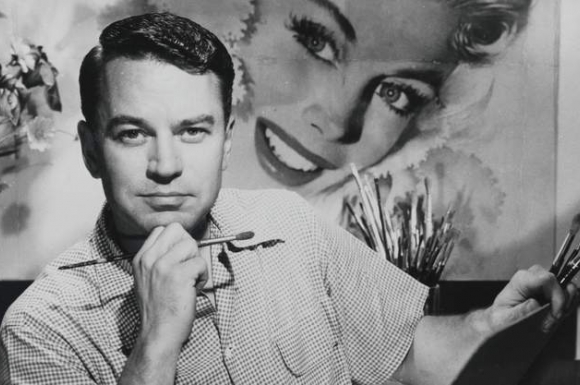 Jon Whitcomb was born in 1906 in Weatherford, Oklahoma, a far cry from the sophisticated world that he portrayed in his signature paintings of beautiful women and handsome men. His parents were both artists and art teachers, and their children began drawing long before they went to school. Even so, it took a long time for Whitcomb to begin envisioning a career in art.

He was an English major in college, making occasional drawings and cartoons for his school magazines, and supporting himself by playing the pipe organ for silent movies as well as for the Presbyterian Church. Apparently his church career came to an abrupt end one Sunday morning when he mistakenly played a rhumba for the recessional.

It was during college that Whitcomb got his first paying art job, painting movie and vaudeville posters for the Palace Theater in Cleveland. After graduation he continued to paint posters, and eventually joined a commercial art firm where he really learned his trade, understudying the accomplished artists there. As his work improved and grew more confident, the firm sent him to its New York office, where he was able to branch out into the wider field of advertising and illustration for national magazines such as The Saturday Evening Post, Ladies’ Home Journal, and Cosmopolitan.

Whitcomb spent time in the Navy during World War II, where he put his talents to good use creating recruiting posters that made the women in WAVES (Women Accepted for Volunteer Emergency Service) look like glamorous “Whitcomb girls.” He was also sent to the Pacific as a combat artist.

Although he found it difficult to readjust to civilian life, and worried that he would be too far out of date, his career never faltered. He zoomed in on people, usually pretty young city women, and reduced the background to simple design elements. He produced a series of articles and sketches about Hollywood stars for Cosmopolitan called "On Location with Jon Whitcomb." Looking back on his career, he credited his success with his ability to figure out what people like to look at -- and to give it to them.